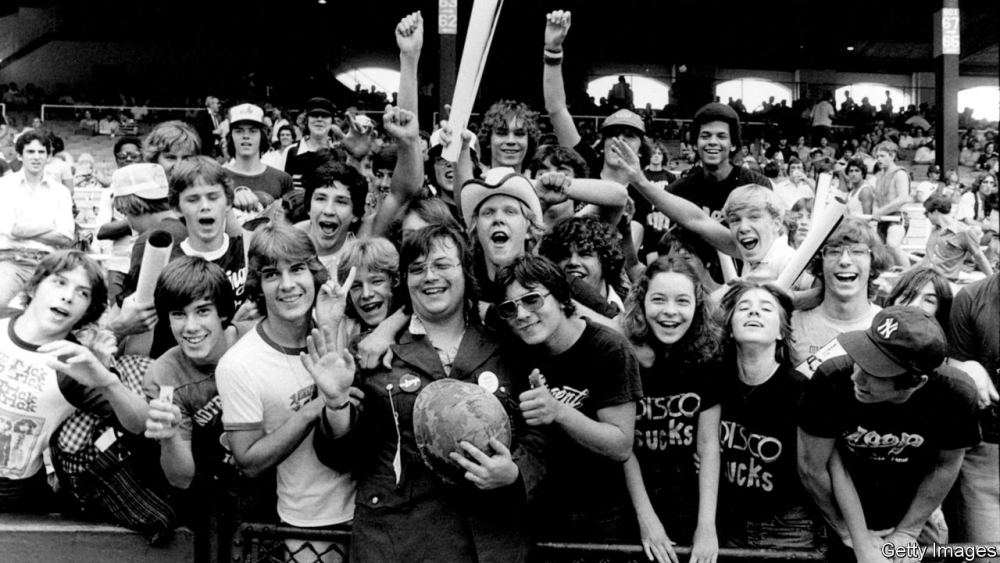 “This wouldn’t have happened if they had country and western night.”
— White Sox pitcher Rich Wortham

To me, the infamous Disco Demolition Night in Chicago forty years ago is an excellent case study for the merits of revising one’s point of view when new information arises. Put another way, there really aren’t purely musical sentiments in which “disco sucks” can be isolated from cultural contexts, even if it seemed so to us at the time. Back then I was pushing 19 years of age and delighted to see disco taking it on the chin, but in truth I lacked the emotional maturity necessary to understand what Dave Marsh wrote at the time:

White males, eighteen to thirty-four are the most likely to see disco as the product of homosexuals, blacks, and Latins, and therefore they’re the most likely to respond to appeals to wipe out such threats to their security. It goes almost without saying that such appeals are racist and sexist, but broadcasting has never been an especially civil-libertarian medium.

Now, I know better. It goes to show that when the facts change, or when a persuasive and factual counter-argument appears, reasonable people can and do change their minds.

Why are the Chicago White Sox commemorating Disco Demolition Night? at The Economist

On July 12th 1979 disco records were destroyed as part of the in-match entertainment. It has come to be seen as an appalling act of prejudice

ON THURSDAY nights the Chicago White Sox give something back to baseball fans, usually T-shirts for the first 10,000 people through the gates of Guaranteed Rate Field. On July 4th the garment is a handsome navy-blue number to mark Independence Day; on July 25th they remember the legendary Sox team of 1983 with a “Miracle on 35th Street” tee. And today, June 13th, when they play the New York Yankees, they are planning to commemorate one of the strangest—and, for many people, most disgraceful—episodes in their history with a T-shirt bearing the legend: “Disco Demolition – the night records were broken.”

Disco Demolition Night took place on July 12th 1979 at the Sox’s old stadium, Comiskey Park. Trying to boost attendance in a season of poor crowds, the Sox invited a local DJ named Steve Dahl to provide some entertainment between the first and second games of a double-header against the Detroit Tigers. Mr Dahl, a rock DJ, had lost his slot at a radio station when it switched formats to disco, and when he got a new job he made much of his unequivocal hatred of the music. This hatred was to be the entertainment for fans. Mr Dahl invited his listeners to bring disco records to the ballpark where he would blow them up, to “end disco once and for all” …