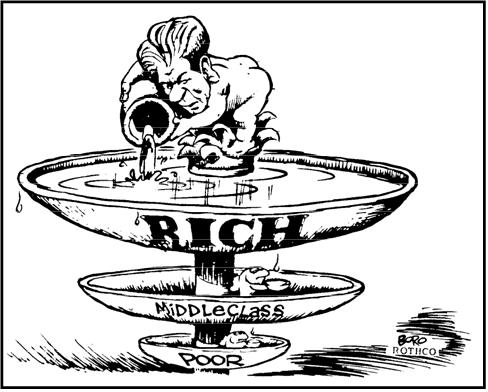 Following are two topics raised during the Tuesday “Chew On This” discussion about what divides Americans.

Tuesday night, we chewed on THAT.

… Capitalism is not an economic system that produces a middle class. In fact, if left to its own devices, capitalism tends towards vast levels of inequality and monopoly. The natural and most stable state of capitalism actually looks a lot like the Victorian England depicted in Charles Dickens’ novels.

Decline and fall: how American society unravelled, by George Packer (The Guardian)

Thirty Forty years ago, the old deal that held US society together started to unwind, with social cohesion sacrificed to greed. Was it an inevitable process – or was it engineered by self-interested elites?

… The large currents of the past generation – deindustrialisation, the flattening of average wages, the financialisation of the economy, income inequality, the growth of information technology, the flood of money into Washington, the rise of the political right – all had their origins in the late 70s. The US became more entrepreneurial and less bureaucratic, more individualistic and less communitarian, more free and less equal, more tolerant and less fair. Banking and technology, concentrated on the coasts, turned into engines of wealth, replacing the world of stuff with the world of bits, but without creating broad prosperity, while the heartland hollowed out. The institutions that had been the foundation of middle-class democracy, from public schools and secure jobs to flourishing newspapers and functioning legislatures, were set on the course of a long decline. It as a period that I call the Unwinding.

In one view, the Unwinding is just a return to the normal state of American life. By this deterministic analysis, the US has always been a wide-open, free-wheeling country, with a high tolerance for big winners and big losers as the price of equal opportunity in a dynamic society. If the US brand of capitalism has rougher edges than that of other democracies, it is worth the trade-off for growth and mobility. There is nothing unusual about the six surviving heirs to the Walmart fortune possessing between them the same wealth as the bottom 42% of Americans – that’s the country’s default setting. Mark Zuckerberg and Bill Gates are the reincarnation of Henry Ford and Andrew Carnegie, Steven Cohen is another JP Morgan, Jay-Z is Jay Gatsby.

The rules and regulations of the Roosevelt Republic were aberrations brought on by accidents of history – depression, world war, the cold war – that induced Americans to surrender a degree of freedom in exchange for security. There would have been no Glass-Steagall Act, separating commercial from investment banking, without the bank failures of 1933; no great middle-class boom if the US economy had not been the only one left standing after the second world war; no bargain between business, labour and government without a shared sense of national interest in the face of foreign enemies; no social solidarity without the door to immigrants remaining closed through the middle of the century.

Once American pre-eminence was challenged by international competitors, and the economy hit rough seas in the 70s, and the sense of existential threat from abroad subsided, the deal was off. Globalisation, technology and immigration hurried the Unwinding along, as inexorable as winds and tides. It is sentimental at best, if not ahistorical, to imagine that the social contract could ever have survived – like wanting to hang on to a world of nuclear families and manual typewriters …