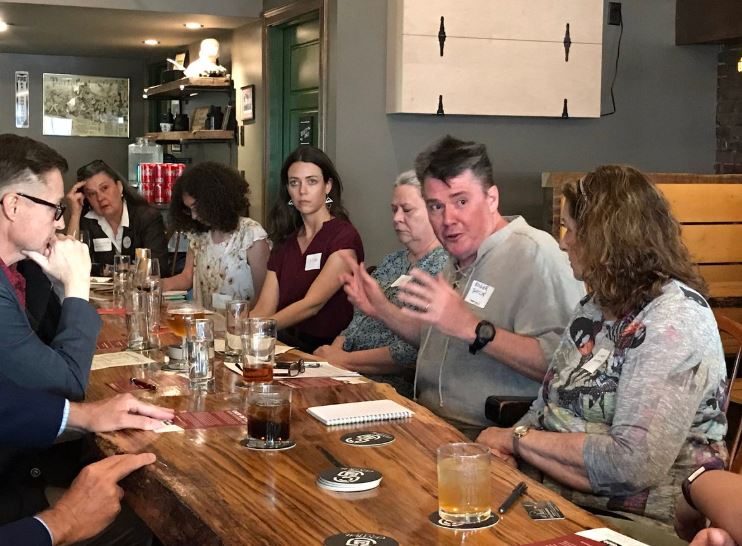 When Julie Schweitzer first mentioned her wonderful idea to stage Chew On This, and I saw Indiana Humanities at the organizational pyramid’s peak, it all combined to remind me of this column from May of 2017.

ON THE AVENUES: Are dissidents born or made? A humanities major examines his life and locale.

… You know, if dastardly parasitic humanities majors like me didn’t combat the angst with alcohol and stick around places like Nawbany, confident that any reasonable definition of leadership includes transparency, the ability to hear opposing viewpoints, to weigh available options and to filter the incessant bilge before charging across open ground toward the machine gun nest – tell me, would anyone bother challenging Wendy Dant Chesser and Bob Caesar when they begin spinning those “our way or the highway” whoppers?

That’s okay. You needn’t answer. It’s my conscience, and it’s not for sale. However, I’m not going anywhere, and you can buy me a beer any time you like.

The dinner went very well, and hats off to the newspaper for sending Brooke to report it.

New Albany event discusses how to connect across boundaries, by Brooke McAfee (News and Tribune)

NEW ALBANY — The theme of the evening was “division.”

But as attendees exchanged thoughts over drinks and a three-course meal at Pints & Union in New Albany, they were united in their goal to build connections between community members of different backgrounds, identities and opinions.

The event, called “Chew on This: What Divides Us?” was one of 10 simultaneous conversations that occurred at restaurants throughout Indiana on Tuesday to explore issues of polarization. The series is part of Indiana Humanities’ new INseparable initiative, which aims to connect Hoosiers across dividing lines.

ArtSeed in New Albany was the host of the event, and Roger Baylor, local blogger and beer programmer at Pints & Union, served as the conversation’s facilitator. The divisions identified in the conversation included differences of values and political opinions, along with differences between rural, suburban and urban communities.