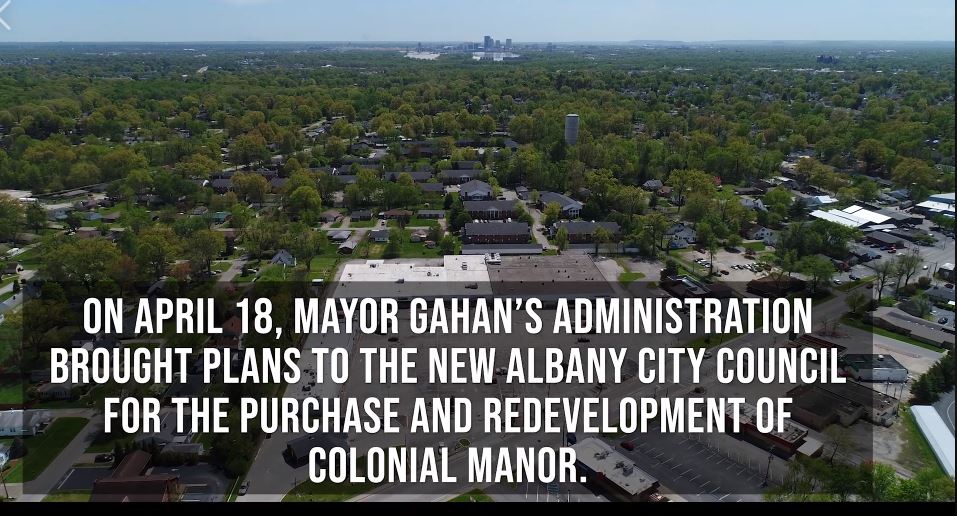 On Wednesday afternoon just a few hours before the listening event sponsored by Colonial Manor Redevelopment Visioning, City Hall released a propaganda video aimed at (a) exaggerating Jeff Gahan’s role in the Colonial Manor redevelopment process, and (b) insulting the grassroots community group that came into existence precisely because Gahan and his crack team of minions hadn’t been doing anything about Colonial Manor.

In which Mayor Jeff Gahan uses city tax dollars to produce a highly biased, politically charged propaganda piece that distorts the story to make himself look better for re-election.

Amid the din of Kool-Aid slurping, let’s take a closer look at the video with the aim of exposing Gahan’s shameless whoppers.

1. It’s true that on April 18, Mayor Jeff Gahan’s administration brought plans to city council for the purchase of Colonial Manor. Gahan himself yet again refused to attend to take ownership of his brilliant redevelopment instincts, second only to Robert Moses in scope and coolness. However, no plans for redevelopment were brought to council — while six “test” designs had been hoisted up the flagpole at the non-input public meeting (see below), redevelopment director Joshua Staten insisted the administration would do some listening of its own after the purchase of the property.

2. Colonial Manor has been moribund for so very long that Team Gahan displayed not one jot of interest in its redevelopment for seven whole years until the “deserving neighbors” began organizing themselves, thus holding out the prospect of interfering with Team Gahan’s usual top-down, pay-to-play monetization arrangements.

3. An essentially meaningless claim. The city’s new comprehensive plan explains theoretical development goals for the entire city, not any one area.

4. Number four is a doozy. A public meeting was held, but only Team Gahan’s operatives were allowed to speak, and requests for public “preferences” were limited to six hastily concocted “options” from one of Gahan’s campaign donor engineers. Duh: Of course neighbors “want something done to the property.” You could glean as much from Facebook. After all, they’d already assembled a grassroots lobby group to drive the conversation, hence the need for Gahan’s non-input meeting: to squelch this conversation and take back control for his Indianapolis corporate campaign donors.

5. In which Gahan refers to $2.6 million in tax increment financing (TIF) bonds as “cash reserves” when in essence they’re credit cards, then further asserts that TIF is not a form of borrowing. Among other problems, these “cash reserves” deprive schools of property tax revenue, leading to school corporation referendums like the one responsible for the Slate Run school construction taking place behind Colonial Manor. Do you think Gahan lies like this about his own household finances?

6. The city did vote 5-4 against something, but whether it was an “effort to bring new life” cannot be known because the vote pertained only to acquiring the property, not to future plans (if any) to redevelop it.

7. We saw the first such “exploration” of options at approximately 2:30 p.m. on Wednesday, when the video being dissected here was released. By his choice of timing, Gahan chose quite consciously (and with obvious malice) to undercut the grassroots efforts of the very same “neighbors” he’d already refused to allow to speak at the non-input public meeting he held for his own benefit.

Truth meter #7: Perhaps the only truthful statement of the bunch.

8. Gahan closes with his trademark messy verbiage. He “encourages everyone” (they’re no longer “neighbors,” are they?) to “encourage” — that’s right, the same verb twice in one sentence, attesting to the sloppiness of writing herein — city council to “support revitalization efforts for Colonial Manor.”

Note the first use of “revitalization” as opposed to “redevelopment,” and also consider that Gahan doesn’t specify which revitalization efforts “everyone” should support. Is it Gahan’s politically motivated boilerplate or the efforts area residents already had started on their own with absolutely no help from the mayor or his flunkies, including their council person Matt Nash, who attended Wednesday’s neighborhood meeting but couldn’t muster the gumption to address the crowd, identify himself and let them know that he’s listening.

Truth meter #8: See how Gahan acts when he can’t have his toys?

Summary: Today’s City Hall video shambles depicts Gahan at his self-interested, narcissistic and bullying nadir, with a truthfulness tally of roughly 25%, and still no apparent interest in the needs of people as opposed to the fix-is-in, play-to-play patronage boondoggle that local “pretend progressives” tolerate and seem to feel is justified as long as local Democrats mouth platitudes about other issues.

How many lies does Gahan need to tell before Democrats see the handwriting on the wall?

There’s a solution. Vote David White for Mayor in the Democratic primary, and let’s give the governing clique a purifying flush.