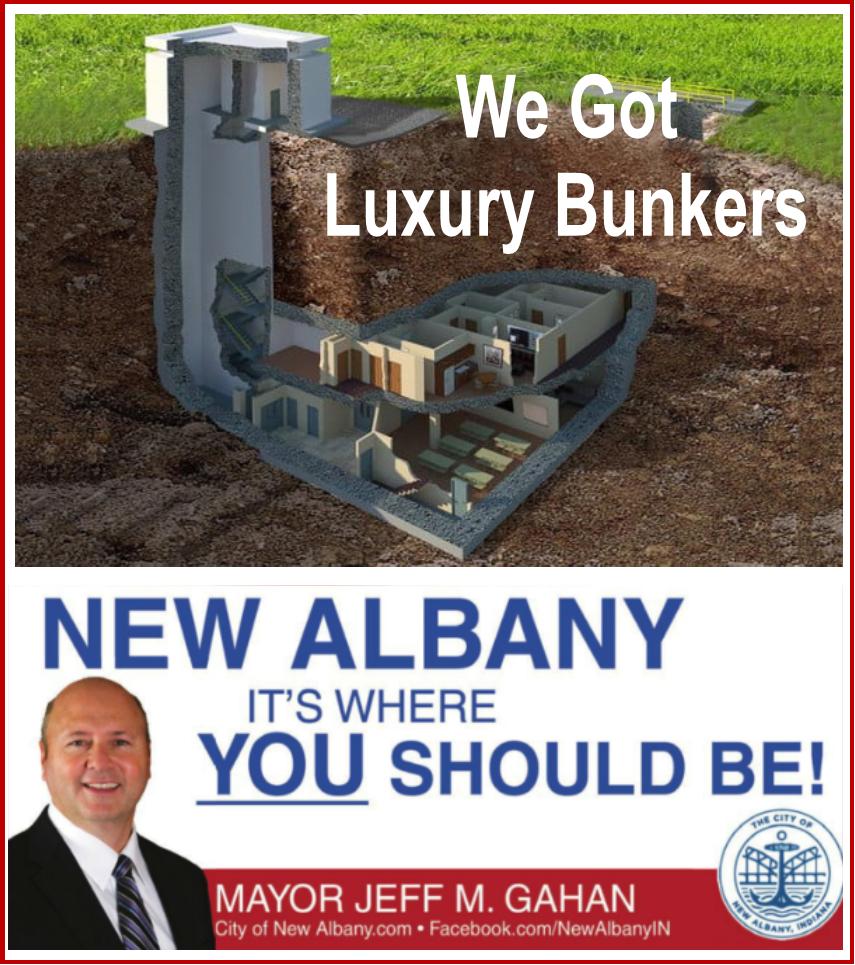 We hope Mr. Straw and his dog are doing okay.

The news story is weirdly disjointed, with the perspective shifting too quickly from a cursory look at the fire at Riverview Tower and ensuing hospitalizations, to the ludicrously overpaid public housing commissar David Duggins’ eagerness to indulge in yet another round of Team Gahan’s nauseous public housing virtue signaling.

Gahanites always cover their own bedraggled asses first, don’t they? Problem is the News and Tribune always lets them get away with it. Why is that?

One person remains in hospital

NEW ALBANY — The fire at Riverview Tower in New Albany on Thursday, when three people were taken to the hospital, was contained to the kitchen area of the apartment.

Firefighters arrived around 8 p.m. to the fire in apartment 1203 at Riverview Tower and were able to contain the blaze. The unit’s kitchen was heavily damaged by fire and smoke. Firefighters rescued Jeff Straw, who lived in the apartment, along with his dog. He remains in the hospital after suffering smoke inhalation. His dog was taken to a local veterinarian for treatment.

Verily, the stage is being set.

GREEN MOUSE SAYS: Are city officials really talking about selling Riverview Tower for luxury redevelopment? Trump might want a piece of THIS action.

Duggins said the outdated 44-year-old facility continues to deteriorate. The building is still being operated by temporary electrical service after last summer’s fire, which displaced residents for more than a week. “We won’t build units this size again,” he said. “These units are just too small and residents have no storage.”

It’s hard to imagine the 44-year-old Riverview Tower being in worse condition than maligned Communist housing blocks in Eastern Europe, where rehabs are not an exception but the rule. Turns out the bones aren’t as bad as thought.

Gdansk and the Falowiecs: “Can Poland’s Faded Brutalist Architecture Be Redeemed?”

Long derided as relics of an oppressive regime, the country’s Communist-era buildings are being given a second look, and a new life.

Doesn’t it defy even this blog’s high levels of skepticism to imagine that the architects and builders erecting Riverview in the mid-1970s didn’t consider 16-story safety as part of the design process?

Duggins said the hope is to build four-story buildings where each unit would have a balcony, allowing residents to have more than one way to evacuate in case of a fire. “This is a 16-story building with a 160 units; any emergency is a real issue,” he said. “There is only one way out of those apartments. Any small fire could be catastrophic in nature.”

Will these four-story buildings replace Riverview at the current footprint, or will they be scattered around town at the many commercial properties NAHA currently is acquiring?

It’s a follow-up question Morris might have asked, but of course, no.

Duggins said he is in weekly discussion with officials with the Department of Housing and Urban Development about Riverview’s future. He said it would likely be a year before any decision is made on the building. He said he tries to meet with residents weekly to dispel any rumors about the facility’s future.

He said he is no longer leasing units at Riverview because of the building’s uncertainty. There are currently 60 vacant units in the building.

“Regardless of the plan, we wouldn’t have to move folks for at least a year,” Duggins said. “We just need to do a better job of communicating with residents …. we have their best interest in mind.”

Whether Team Gahan’s secretive final preferred outcome for Riverview Tower is outright demolition or its spiffy renovation for market rate housing (read: no more poor people enjoying great views), is there any doubt that chicanery is afoot?

You just don’t move the back alley redevelopment fixer to public housing if helping people is the ultimate goal.

He said HUD is moving toward public/private partnerships, which include tax credits, in the future.

Morris’ article ends abruptly with this reference to HUD, and so here’s an article that explains Ben Carson’s view of public/private partnerships.

It’s too bad about the closing of the Arby’s on Charlestown Road, because one gets the impression that Jeff Gahan, Duggins and Carson could enjoy a nice meal together there … and come to a gentleman’s agreement about the future of luxury in New Albany.

“Some people have complained that, you know, it’s a mechanism for the rich to increase their wealth,” Carson said. “Well, what they don’t understand is rich people are going to take their money, and they’re going to invest it somewhere, so why not incentivize them to invest it into areas that have been economically neglected and deprived.”