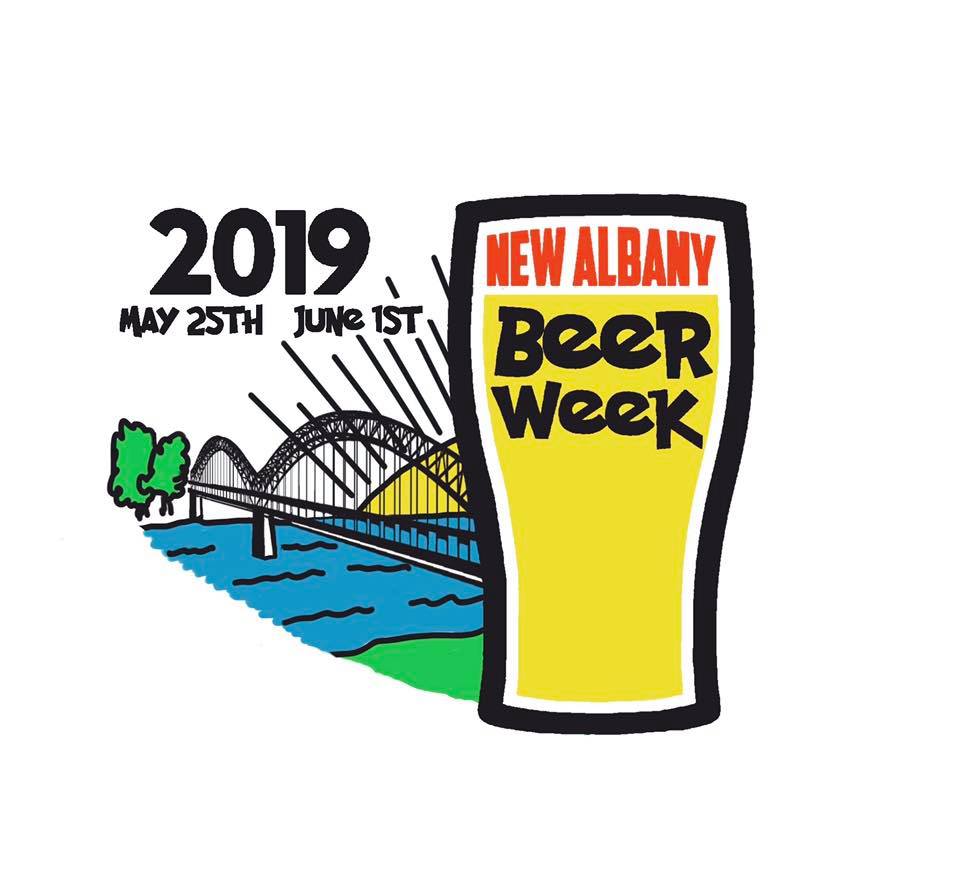 The word “iconic” tends to be overused, but there can be no doubt that our annual Keg Liquors Fest of Ale is iconic.

The festival relocated to New Albany’s Riverfront Amphitheater in 2016, which means that 2019 is the fourth iteration at our waterfront. It will be the 14th Fest of Ale overall.

Fest of Ale exists because of American craft and imported beer’s explosive growth in metropolitan Louisville, the state of Indiana and the nation as a whole.

The craft beer industry has grown by 21 percent in Indiana since 2015. C+R Research’s “The State of Craft Beer” found the Hoosier state ranked 16th nationally in the number of craft breweries, and 21st nationwide per capita, with 2.8 breweries per 100,000 drinking-age adults … more than 150 craft breweries employ nearly 8,000 full-time workers across the state of Indiana, creating an economic impact of more than $1 billion a year, according to the Brewers of Indiana Guild.

Fest of Ale’s relocation to New Albany has provided reinforcement for the daily presence of better beer options in our city. The day is long past since NABC’s Pizzeria & Public House was the sole local choice for craft and world beers. Consider the dimensions of the historic downtown business district alone. Draw a line from Floyd County Brewing/Grain Haus to La CatrinaDragon King’s Daughter, then from DKD to Gospel Bird, and finally from Gospel Bird back to FCBC. 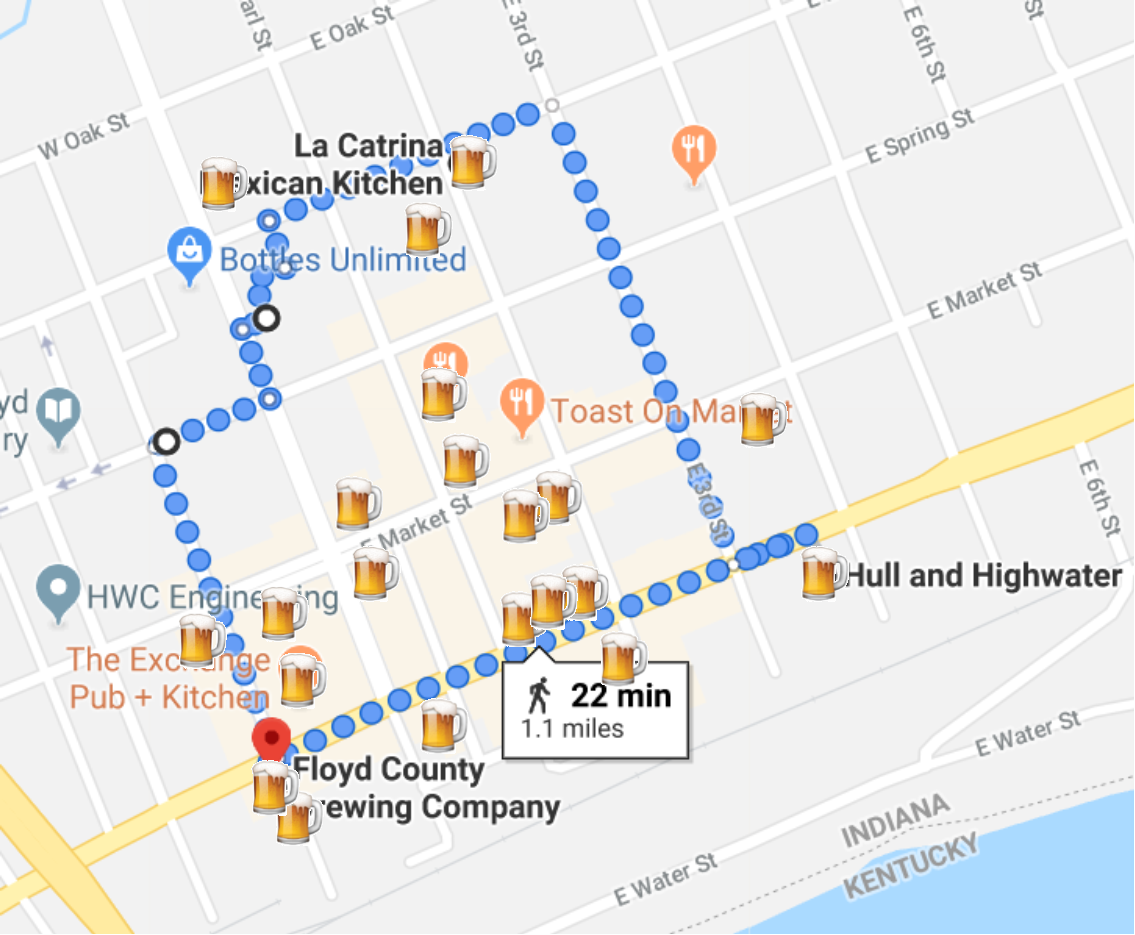 There are two breweries (don’t forget Donum Dei out Grant Line Road) and somewhere around 125 draft spouts inside this triangle — to be sure, some of which pour mainstream beers, too — but probably at any given time there are dozens of craft and imported beers available, not even considering bottles and cans.

As to why all this matters, consider these words from an instructive essay in All About Beer magazine about the way small, independently owned breweries embody hopeful and helpful trends.

Breweries aren’t like the average industrial plant. They are people magnets, bringing folks in who are curious to try a pint of locally made beer. In fairly short order, breweries can create little pockets of prosperity in cities that can (and often do) radiate out into the neighborhood. Pretty soon, other businesses see the bustle and consider moving in, too. It doesn’t hurt that breweries often find run-down parts of towns that have great buildings. Once a brewery moves in and refurbishes an old building, it reveals the innate promise of adjacent buildings to prospective renters.

In New Albany, we can extend this analogy past breweries to any number of eateries and bars that have opened during the past decade. They cannot achieve economic development miracles all by themselves, but when community pillars are unable to muster more compelling strategies, food and drink mark a good place to start.

As has been the case in downtown New Albany. In 2006 city council implemented Indiana’s riverfront development area tool to enable reasonably priced three-way alcohol permits, which obviously jump-started a food and drink revolution. Lots of other good things have occurred in the wake of this action, but it should be obvious that beer did its part to help bring back downtown.

Now to the central point: A firmly entrenched annual Keg Liquors Fest of Ale in New Albany provides the food and drink community with an intriguing opportunity to expand our daily municipal celebration of beer by incorporating a powerful promotional tool.

Many such beer-themed weeks are held across America. They vary in size and scope, and range amid districts, cities and states, but conceptually, there is relative uniformity.

The idea is to educate and disseminate beer consciousness, with an ulterior motive of letting consumers know more about the establishments and people who make it all possible.

There was a previous effort in 2016 to inaugurate New Albany Beer Week; it worked out well enough, but for various reasons didn’t survive in 2017.

During the week of May 25 through June 1 there will be numerous opportunities for restaurants, breweries, bars and retailers to build events and promotions around beer — tastings, special releases, beer dinners, food pairings, beer cocktails — often involving wholesale and brewer representatives, who’ll be in town for Fest of Ale, anyway.

Most of these events will take place downtown because that’s where the concentration of licensed establishments is. But there are no hard and fast rules.

Obviously Keg Liquors Fest of Ale is a stand-alone entity with its own playbook for participation. The Exchange and Hull & High Water are official Fest of Ale sponsors and thus are accorded pride of place in scheduling. The idea of New Albany Beer Week participation is to weave a calendar of complementary beer events as a prelude to the bigger ticket draw.

Owners and operators: Utilize your wholesaler representatives to plan a beer event to interest the regular clientele you already have.

Beer Week needn’t be nuclear physics, and just because you pull strings and go high to score a keg of something geekily unusual does not mean beer fans will show up to drink it. Please your regular crowd, and their friends and visitors will follow.

It’s important to know that we’ve omitted the word “craft” from the banner. The word is increasingly hard to define, and it’s more egalitarian to trade in beer without qualifying adjectives. If you’re selling lots of Goose Island and want to center a promotion around it, then give Nadorff a call without worrying about today’s “craft” definition.

Note that five breweries (Short’s, Sun King, Terrapin, Sweetwater and North Coast) as well as New Day Meadery are Fest of Ale “beer sponsors.” If one of them is involved with your event, there’ll be “extra” touts from Keg and Fest of Ale in addition to the social media from the New Albany Beer Week page at Facebook.

All that’s being asked of participating establishments is to purchase New Albany Beer Week logo glassware for use in their events (and as a way of promoting the collective). There’s a bit of seed money for use to get the glasses printed, and consequently they probably can be paid at delivery. This is still being hashed out, but for the moment the one thing I can say for sure is that I need your logo to put on the glass. If you’re participating, send your logo to me here.

That’s the extent of it this year.

We want to keep New Albany Beer Week as simple as possible the first time out, then grow it as Fest of Ale grows during years to come. An informal group of organizers is working on this year’s event. Using the Facebook page as our basic platform, we’ll try to collect information, direct traffic, coordinate and do the best we can to spread the word.

I’m excited. We can expand New Albany’s footprint on the metropolitan beer map, spread the word about our incredible local food and drink community, and have some fun. Stay tuned for further details.

There’ll be a third part to this digression, but not until I get the list of participants updated.