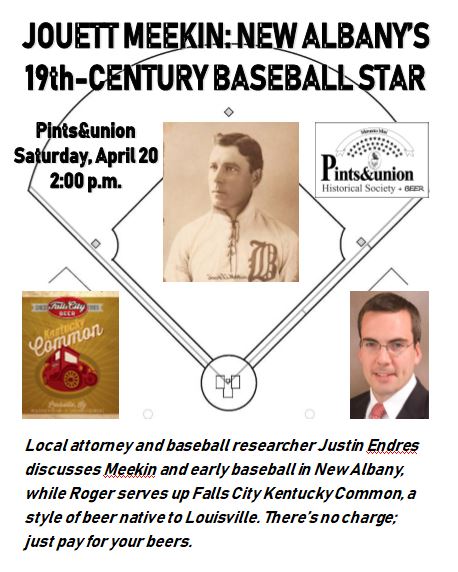 If our long-scheduled Saturday afternoon chat about baseball and beer were to have taken place outdoors, it probably would have turned into a rainout.

Consequently while not the ideal time to play two, it might be an excellent opportunity to drink two 12-ounce cans of Falls City Kentucky Commons (it’s only 4% abv) while learning from Justin Endres about 19th-century baseball in New Albany and the important role played by big leaguer and native New Albanian pitcher Jouett Meekin.

We’ll kick off at 2:00 p.m. upstairs. Here’s a nicely written overview of Kentucky Common as a primer. Click through, read all of it — and you’ll be tested on Saturday afternoon.

The History of Kentucky Common

As a beer style, Kentucky Common was a bright, but short-burning star. It is one of the three or four modern beer styles that the Americas can claim as indigenous.

Its origin is rooted in the influx of German and Irish immigrants to the region in the mid 1800s. They came thirsty, keen for the beer of their homelands, and quickly began trying to reproduce it. And, like other immigrants, they adapted to the ingredients available in their new home.

They made a low alcohol thirst-quenching beer, basically a dark version of American cream ale. The grain bill was a mix of the protein-laden six-row malt, and some native corn to smooth the beer out. A dab of dark and caramel malts were added. The water around Louisville is alkaline, so the small addition of dark malt could have been to help acidify the mash. It also could have been added just to increase character …