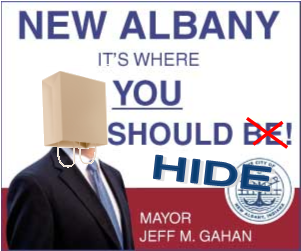 Another primary election season soon will pass with the incumbent mayor refusing to emerge from seclusion to debate his opponent.

David White yet again extended an invitation, and true to form, Jeff Gahan emitted mere shadows of former gurgling sounds in response. Shouldn’t we be expecting more from a man who thinks he should be mayor for life?

I’d love to see David have the chance to debate Goliath Gahan. I actually believe at some level Gahan himself might want to do so, given his outrage at the temerity of anyone daring to challenge his reign.

Regrettably, the odds are that Gahan’s handlers won’t allow it. They know he can’t do improv, and they fear the emergence of the nocturnal Mr. Hyde. But a boy can dream.

It should be remembered that in 2015, Gahan artfully evaded full debate with both his challengers. The debate he did agree to attend came with numerous caveats.

When I played basketball, we called these stipulations and the referees who issued them “homers.” When it came time for the Leadership Southern Indiana debate, Gahan was the ignominious no-show.

Following are a few thoughts I had in 2016, when I was a member of the Leadership Southern Indiana Discover class of 2016-2017.

The bus stopped in front of The Grand, and prior to my Discovery 2017 class disembarking, Gahan got on. Blocking the only potential escape route except his own, he stood at the front of the bus and offered a few words about New Gahania in an emerging Time of Trump.

As Gahan’s many handlers long have noted, and tended to plan the mayor’s schedule accordingly, his agoraphobia manifests itself in the usual way.

It isn’t that Gahan fears human contact. He fears unscripted situations in public settings, and when compelled to interact with people in such places, he generally over-compensates, displaying a forced, cheerleader-level of excitement, which at best is chatty, though usually comes off as just plain strange.

However, give this man a proper script, show him the markings, block it out, and he invariably succeeds in appearing “mayoral,” whatever that really means. Team Gahan knows this, and extemporaneous environments are studiously avoided, because it’s anyone’s guess what might come out of the mayor’s mouth amid the escalating inner panic.

On Wednesday, standing there on a bus chartered by an organization he shunned, nothing was written on paper, and the results were predictably weird.

However – amazingly – Gahan got something right when he conceded that downtown New Albany’s revitalization owes primarily to risks taken and investments made by independent business persons and entrepreneurs, not City Hall.

This was a startling admission, given that Gahan’s re-election campaign was predicated on taking personal credit for the city’s improved prospects. In addition, it doesn’t jibe with Team Gahan’s day-to-day municipal governance, which relies on Goebbelsian marketing and rule-of-plaques, both real and metaphorical, as erected by Gahan’s various funding mechanisms and the toadies manning them.

Still, it was a factual utterance, and worthy of note; they come once yearly from Gahan, so stopped clocks and all.

Then, in closing, Gahan actually said something interesting, though not before somehow confusing a busload of local residents for visitors from Omaha, by expressing the misplaced hope that they would enjoy their “stay” here.

The most important thing for you to remember about New Albany, and what we always remind everyone, is that we’re a kind city.

That’s kind, as in affectionate, loving, helpful, benevolent, and displaying the qualities of kindness.

Whether this assertion is true isn’t the point.

Rather, in spite of Gahan’s odd suggestion that his statement functions as some sort of widely embraced local mantra, it’s the very first time I’ve heard him express this sentiment by using the precise word “kind.”

And, since it isn’t in the mayor’s nature to be improvisational, the word – the concept, this mantra – must have been planted by someone, at some point in advance. He’s simply not good enough with words to pull “kind” from the ether.

It’s just my opinion, but I think it’s no coincidence that Gahan introduced this fresh new concept of a “kind” city on the afternoon following a smoldering train wreck of an election on the part of his Floyd County Democratic Party, a topic covered elsewhere:

ON THE AVENUES: Don’t be a Dickey, local Democrats. The verdict is in, and it’s time for a change.