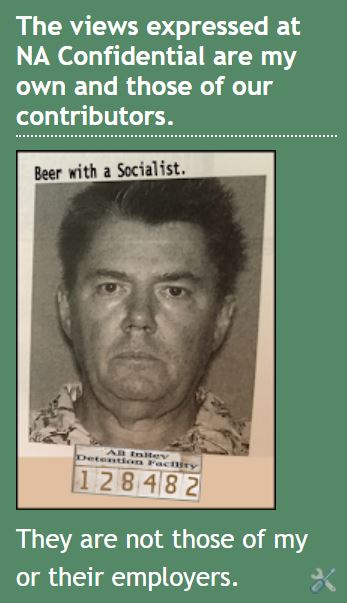 Roughly once a year I feel compelled to issue this explanation of a pundit’s life as lived in public view, so here goes.

I’m fairly confident that after 30+ years as an employee, owner and employee again, working in various sectors of the food and drink business, I’ve made many more friends than enemies. If this weren’t the case, it’s hard for me to believe I’d have gotten this far. If you’re one of the enemies, you may not be reading these words, but a few thousand friends and casual acquaintances might be doing so.

I thank you all, and especially those who hold the old-fashioned view that it’s possible to agree here, disagree there, and remain friendly all the while.

As such, just know it’s a point of pride with me that I’ve seldom found myself unable to have a beer or coffee alongside a person with whom I disagree. The act of sharing a table can have a remarkably salutary effect; amazingly, it often leads to a state of co-existence approximating “live and let live.”

Exceptions? They exist, and prove the rule.

Yes, I have lots to say and I’m not shy about saying what I think. Concurrently, anonymity does not jibe with my system of values — never has, never will — and whatever I say or write always comes with my name attached to it, come what may, right there, openly and perhaps even “bigly.”

There’s no stealth, surprises or male cow feces in my writing life. At times I’m right, other times wrong, often both simultaneously, and because life’s a dialectic, the processes of self-knowledge and learning never, ever stop. In fact, being wrong is necessary to even begin understanding what’s right. Cherish being mistaken, and appreciate the lessons you are taught as a result.

I’m six feet four inches tall, and weigh too damn much (okay, around 255 lbs), the point being invisibility isn’t a likely outcome for me. I stand out in a crowd, that’s just the way it is, so I might as well remain transparent and out in the open. There are dozens of ways to reach me, to tell me what you think, to differ, to agree, and to get down to a dialogue — or tell me I’m an asshole. Trust me, you won’t be the first.

But there’s one thing I’ll never understand, because as outspoken, engaged and polemical as I can be, it has not once occurred to me (hypothetically) to call up Robert Massey, the Louisville Orchestra’s CEO, and tell him we can’t buy concert tickets any longer because I heard the principal cellist say she dislikes Pilsner Urquell.

Because: her dislike of the finest Pilsner-style lager this planet has yet to produce has absolutely no bearing on her ability to perform the music. It is no reflection on Massey’s stewardship of the orchestra, and matters not one iota as to our appreciation of the musical experience. It’s a dog that won’t hunt and a complete non-starter.

It would be petty and rather childish for me to feel this way, to have this reaction or worst yet, to act on it. If I did, Massey’s response should stress that how one functions as an employee is one thing, and what he or she believes, does and says in their free time is something very different.

Right? Now the weary sighhhh that always concludes these digressions.


NA Confidential welcomes submissions, contributions and thoughts. Am I spot on or full of it? Write and tell me why, and our readers can be the final judge. The metaphorical door is always open. You must only resolve to make use of it, but none of this can occur if you’re unwilling to be as open with me as I am with you.