Props to Stacie Bale for informing Warren Naps and the Bored of Works that the intersection of Main and Bank is hazardous for pretty much everyone who uses it, drivers included, but especially walkers.

NEW ALBANY — Stacie Bale, owner of Roadrunner Kitchen in New Albany, loves her new location at the Underground Station, at the corner of Main and Bank streets. She moved there from her old Main Street location in January.

While the new home is perfect for her restaurant, getting there is a problem — for both pedestrians and vehicles. Trying to cross Main Street from Bank Street is dangerous, Bale told the New Albany Board of Public Works & Safety on Tuesday, and she is looking for the city to add some safety measures.

“We have maintained a lot of our regulars, but tons of pedestrians won’t cross the road,” she said. “We have 11 businesses there [Underground Station] but due to safety you can’t get there. I don’t even leave work that way in my car.”

Bale is hoping the city can add a traffic light at the intersection. City engineer Larry Summers said there are plans in the works to redo Main Street, from East Fifth Street to State Street “a couple years down the road.”

“Part of that is to look at a signal at that location. But before we do that we have to do an analysis to see if a signal is warranted,” he said. “We are looking at several different options for that intersection.”

Bale is hoping something can be done there sooner rather than later.

“I love it there, and our new landlord is super,” she said. “But something needs to be done there to make it safer.”

Sew Fitting owner Cisa Kubley, whose shop sits in front of the Underground Station at Bank and Main streets, said the intersection is one of the most dangerous in the city.

“We hear honking and screeching tires every day. Even when there aren’t cars parked on Main Street it’s still very limited visibility,” she said. “People drive far too fast and pay no attention to cars slowing to turn or pedestrians trying to cross.”

It was October 29, 2017 (below) — and Larry Summers probably gave precisely the same robotic answer, because then as now, the people charged with determining safe walking conditions do so from the DRIVER’S SEAT OF THEIR CARS, not with two feet on the ground.

Main Street intersections at Bank and 4th are hazardous for pedestrians. Where’s City Hall, apart from a state of denial?

An increased number of businesses are on the north side of Main Street. More are on the south side (Underground Station) as well as one of the larger expanses of surface parking (by the levee). 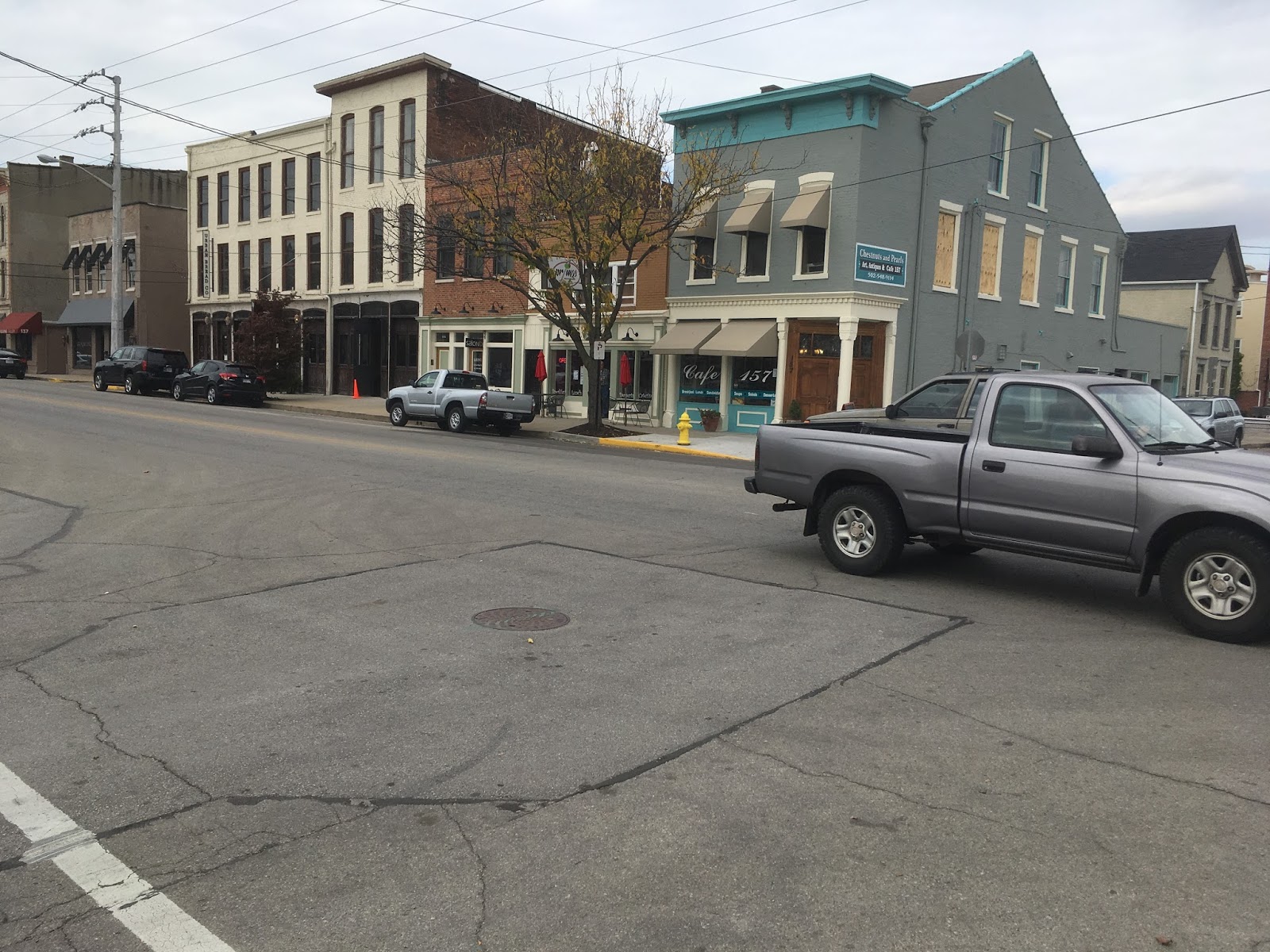 Notice the crosswalks and other means of making pedestrian passage across this wide street easier.

That’s right. There are none.

The intersection of Bank and Main also is bad for drivers, especially those northbound from the surface lot. It’s been two and a half years since this was first pointed out to BOW (reprint below).

Now the situation is worsening at 4th and Main, where Hull & High Water is generating a great deal of foot traffic, both from area parking and the beautified corridor.

Jeff Speck had thoughts about this. These are 17-foot traffic lanes and 8-foot parking depths. That’s a whole 50 feet from one side to another, without any effort to slow traffic or assist pedestrians.

Until city officials do something about this, anything they say about “walkability” is to be taken as an insult. After all, it’s “not an option,” is it?

Board of Works approves new city slogan for new city seal: “It’s not an option.”

There were many curiosities at yesterday’s Board of Public Works and Safety meeting, held at the usual 10:00 a.m. slot which precludes so very much in the way of attendance and public input.

We learned that some folks can temporarily close streets with little effort, while others must assemble a petition. We noticed that when it comes to communications, it doesn’t. It was reported that John “Human Chainsaw” Rosenbarger will be felling 30+ trees on Thomas Street, and planting 50 more … and so on.

However, let’s focus on just one of the items.

At a previous meeting, local businesses occupying the evolving Underground Station property on the corner of Main and Bank had asked the Board of Works to refit the intersection in front of their building (Main and Bank) into a 4-way stop, and to add a handicapped parking space on Main.

It wasn’t surprising to hear street department commissioner Mickey Thompson speak for the board in waving away these requests, but his justifications (and his tone) were puzzling.

As for the handicapped space, Thompson feared establishing a harmful precedent, as though to say that if one business seeks a handicapped space, all of them would. Left unsaid was whether people with handicaps would find this useful.

But isn’t the real question this: Why doesn’t the city, through its Board of Works, proactively address parking issues and enforce parking ordinances? Why be troubled by a solitary handicapped space when no laws presently are enforced? After all, don’t just do something — stand there.

As for the 4-way stop request, which was made owing to steadily increasing traffic probably resulting from the simple fact that finally there is commercial traffic where before there was none, Thompson could do no better than grunt: “It’s not an option.”

The obvious question that should have been asked and answered: “Why Not? Why isn’t it an option?”

We already know that through the top-down marionette otherwise known as the Board of Works and Safety (that word again), the Democratic municipal machine is delaying all movement toward street grid reform for 18 months or more. However, as the intersection of Main and Bank attests, the grid already is unsafe, and in the regrettable vacuum created by Jeff Gahan’s politically-inspired and plainly cowardly deferrals, our streets are becoming more unsafe by the day.

Jeff, Warren, Adam … yo, guys, can we at least have a Band-Aid to staunch the bleeding?

Even a wooden clothespin in place of the necessary tourniquet might help us to stay alive and watch you ineffectually fiddle.

Following are some fair and balanced pros and cons of the 4-way stop.

… In the big picture my personal hope and goal is for my neighborhood (and city) to be a safer place for all ages to walk and bike. If that means cars have to drive slower or there is more congestion in places or at certain times of the day, I’m willing to accept that. If we build and manage our roads to accommodate rush-hour traffic, the livability of our city will suffer at all hours.