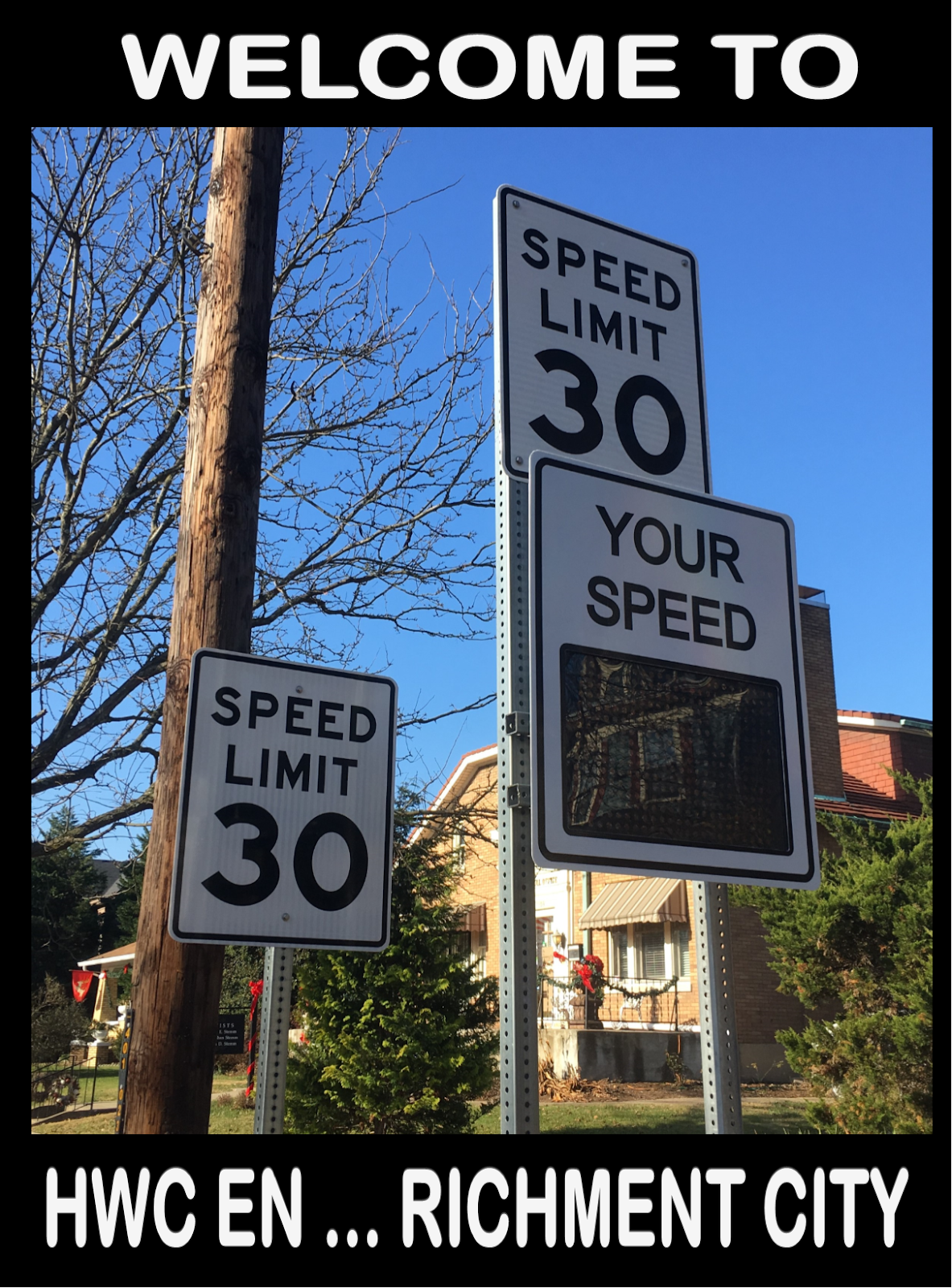 Our urban streets will not be safe until we slow cars. We won’t make a significant dent in slowing cars if our toolbox is a combination of signage, more enforcement and driver education. Those are all nice, but the primary hurdle we need to overcome is our propensity to over-engineer, to apply highway thinking to local streets.
— Charles Marohn

An oldie (2015) but a goodie. Last week while walking to work down the south side of Spring Street at around 10:00 a.m., I paused to watch the digital display by Williams Plumbing, situated just after the horrendous curve at 10th Street. For almost five minutes the sign continuously read “too fast, slow down,” or whatever the words.

Gahan botched the two-way reversion, and now, beginning next year with a different mayor and a new council, it will be time at last to find ways to repair the short-sighted damage.

For those of you that drive, I’d like you to start taking note of something. I’d like you to mentally document the way that pedestrians act at crosswalks. When you approach a crosswalk and there is a pedestrian walking across the street, look at how they respond to your presence.

If they are like most people, they will do something to pick up their pace and clear the intersection more quickly. They’ll walk faster. They might even run. I’ve even seen people retreat back to the side of the road then wave me – the driver – through.

Now think of approaching that same intersection except, instead of a pedestrian crossing, there is someone in another car. What does that other driver do? Do they pick up their pace to clear the intersection for you? Do they retreat whence they came and wave you through? Of course not.

The obvious answer would be the asymmetry of danger between the pedestrian and the automobile driver, the former being far more vulnerable. That might be the case in some instances, but you can observe pedestrians rushing across the street even when the car is fully stopped, the driver has made eye contact and there is no real risk.

I think a more pernicious reason for this behavior is that many – perhaps most – Americans today have accepted the notion that streets are for cars. Period. Anyone not in a car might be allowed in this space as a courtesy, but the paved street is – first and foremost – the dominion of cars.

Last week someone sent me this video on pedestrian safety from the Des Moines police department. While very well-intentioned, especially considering (insert your own crass SWAT team and/or militarization reference), I found the premise to be incredibly disturbing. First, they state that there is confusion over who has the right-of-way at “intersections and at crosswalks.” Okay, but then they add this (0:48):

The biggest problem drivers face is being able to understand all the different types of pedestrian signs.

Now, to cut the police a little slack, their role in this crazy system is to maintain order. There is nothing more orderly than a bunch of signs and a plethora of laws telling us where each type is to be deployed and how everyone is legally required to act at said deployment. I’m not shocked that the Des Moines police department might view this as a regulatory problem.

Still….drivers are having trouble understanding the signs? So, if every driver clearly saw and understood the signs but pedestrians were still getting mowed down – or, more likely, people were simply choosing not to walk because they did not feel safe or comfortable doing so – that would be okay? It would be orderly, but that is clearly not the optimum outcome.

One of my twin hometowns – Baxter, the fully suburban one – took this thinking to the next illogical step in a recent project they completed. Along their expanded stroad are not only signs for a pedestrian crossing just in case one encounters that sub-variant species rarely found in suburbia, Homo Sapian Carless, but they actually each have a preceding sign telling you there is a sign coming up. Very orderly. Very dumb.

This is all to be expected, however, for a centralized system like ours. While there are many local projects that don’t get state or federal funding – the small ones – the outside resources for the rest is what drives the mission and focus of all these local street departments. For instance, the bible for placing signage is a book known as the Manual on Uniform Traffic Control Devices (MUTCD). The Federal Highway Administration version of the MUTCD – think of it as Patient Zero – defines a street as “see Highway” (no joke). It then defines a highway as:


Highway—a general term for denoting a public way for purposes of vehicular travel, including the entire area within the right-of-way.

Is it any wonder people don’t feel safe crossing a street outside of car? The mentality of our entire system – and subsequently everything we communicate to driver and pedestrian alike – is that the street is the sole dominion of the automobile. Everything and everyone else is an interloper to be tolerated, at best.

And if you think that is too harsh, consider this paradox: When we design for fast-moving traffic, we go to great lengths to remove obstacles from the clear zone; anything that won’t give like a tree or a wall. Anything we have to place in this clear zone we then design to be “breakaway” so that it gives way when a car collides with it. I’ve even seen state DOT’s demand that retailers remove sandwich board signs on the sidewalk, not because it was distracting but because the signs could damage a vehicle if the vehicle went off the stroad and hit them (note the sign was four feet from the actual building, which might also cause some damage if struck).

We go through all this trouble to make things safe for vehicles and their drivers, but then we allow – and sometimes even design for – pedestrians to be in this space. We put sidewalks right on the edge of roadways that we post at 45 mph, even knowing that most people will drive 55 mph. Regardless, a pedestrian struck at 45 mph is just as dead. Perhaps traffic engineers are not offended by this as pedestrians are technically “breakaway” as well.

So we tolerate pedestrians, essentially at their own risk. If we wanted to build streets to not just tolerate pedestrians but to actually accommodate people – who, by the way, are the main indicator species of a financially productive place – what would we do differently?

Last week someone sent me one of those articles that details the history of automobile/pedestrian interaction. This one was in Collector’s Weekly and, despite the unnecessarily provocative title, was a great read. The most amazing part – and the answer to making streets that are financially productive once more – is the different attitude towards pedestrians. From the article:

Roads were seen as a public space, which all citizens had an equal right to, even children at play. “Common law tended to pin responsibility on the person operating the heavier or more dangerous vehicle,” says [Peter] Norton, “so there was a bias in favor of the pedestrian.” Since people on foot ruled the road, collisions weren’t a major issue: Streetcars and horse-drawn carriages yielded right of way to pedestrians and slowed to a human pace. The fastest traffic went around 10 to 12 miles per hour, and few vehicles even had the capacity to reach higher speeds.

As the article went on, it detailed things such as “silent policeman” and “traffic turtles” that essentially thwarted the speed ambitions of drivers so as to keep the public realm safe for everyone. The expectations were different:

“If a kid is hit in a street in 2014, I think our first reaction would be to ask, ‘What parent is so neglectful that they let their child play in the street?,’” says Norton.

“In 1914, it was pretty much the opposite. It was more like, ‘What evil bastard would drive their speeding car where a kid might be playing?’ That tells us how much our outlook on the public street has changed—blaming the driver was really automatic then. It didn’t help if they said something like, ‘The kid darted out into the street!,’ because the answer would’ve been, ‘That’s what kids do. By choosing to operate this dangerous machine, it’s your job to watch out for others.’ It would be like if you drove a motorcycle in a hallway today and hit somebody—you couldn’t say, ‘Oh, well, they just jumped out in front of me,’ because the response would be that you shouldn’t operate a motorcycle in a hallway.”

Forgiving design principles that traffic engineers employ have replaced the “that’s what kids do” burden on the driver with a “that’s what drivers do” burden on all of society. If we want to make our cities prosperous again, we have to return that burden to the driver. Not just at intersections. Not just where there are properly specified signs. It is their burden, their responsibility, everywhere, all the time. Period.