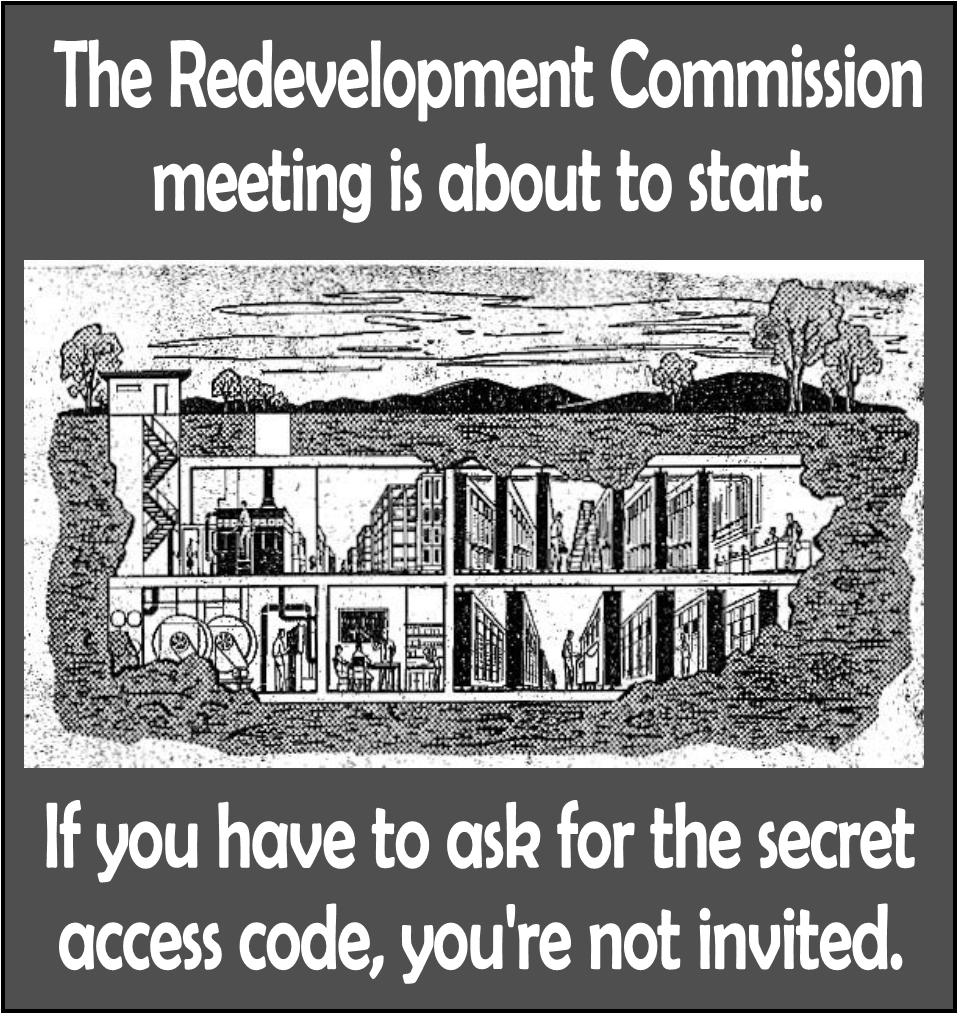 Thanks to SW for this link, which dates back three years to a period when Carmel’s city council was rolling back previous reforms aimed at taming an amok Redevelopment Commission.

All the themes here are not applicable to our own situation in New Albany, but some certainly are. I concur with the school of thought advocating a curtailment of Redevelopment Commission powers, greater city council control over vast sums of money currently being wielded by a clique of redevelopment cronies, and an enhancement of transparency for everyone involved.

Right now in New Albany, we don’t have enough sunshine. Breaking a few comfy, entrenched strangleholds would help with that.

Monday, the council unanimously removed a restriction that prevented its own members from serving and reappointed Jeff Worrell.

The restriction was a problem for Worrell. He has served on the commission since 2006 but was elected to the council in November and took office this year.

Worrell is one of five council members Mayor Jim Brainard supported financially in the May Republican primary, a move that swept a majority of candidates onto the council who support his vision for the city’s future.

New council members have moved fast to validate Brainard’s trust. On Jan. 4, they eliminated a restriction that the commission must seek approval for professional service contracts exceeding $25,000. The council on Jan. 18 eliminated a requirement that the council approve certain debt entered into by the redevelopment commission or its affiliates.

During the mayor’s past two terms, the political landscape was different. Political opponents who controlled the City Council were growing increasingly concerned by 2010 that the mayor was using the redevelopment commission to enter into long-term debt without council oversight.

The mayor had been using the commission to bypass the council to financially back redevelopment projects, most notably construction related to The Center for the Performing Arts, City Center and the Arts & Design District.

In 2010, the council passed the restriction on its own members from serving on the commission, saying that doing so was a conflict of interest. Ron Carter, who was the commission’s president, was booted off the body.

He is now the City Council president.

The council enacted the financial restrictions in 2012 after passing $195 million in bonds to bail out the commission when it could no longer pay both long-term obligations and ongoing operating costs.

Now that supporters of the mayor control both bodies, Carmel is moving forward with $242 million in bonds to build up to 32 new roundabouts and other infrastructure projects during the next three years.

Worrell said he is comfortable with the direction the redevelopment commission has taken in the past and believes in its mission for the future. He is president of Advantage Medical Rehab Equipment, helps organize the annual CarmelFest celebration and runs the website GoodDayCarmel.com.

He wants to use his experience to see current projects through their completion and to continue to build Carmel for the future.

“There has always been this discussion about transparency,” Worrell said. “How much more transparent can you be if you have a representative who is on the City Council participating on the redevelopment commission who can then have some responsibility for making sure the council is aware of what is going on? I never understood the logic of it going the other direction.”

Brainard said he wants the most qualified people to serve on the redevelopment commission and serving on the council should not be a disqualification. He also thinks the restrictions the council had passed on the commission were an overreach of authority.