Situated between 150 parking spaces for a ballfield complex used only in warm weather (outlined in yellow) and State Street, which connects the downtown business district and the chain-filled mini-exurb by the interstate, are commercial properties that include a new Family Dollar (north), an older metal building once housing a beer wholesaler and later a fireworks peddler (south), as well as what used to be Lang Auto, inhabited for some years now by Denny Andres (Double A Properties, outlined in red).

To put it gently, Andres’ stewardship of the property has been, well, widely questioned.

For several months it has been rumored that after countless years of talking a big game and doing nothing, City Hall would be purchasing Andres’ properties. No mention was made of brown field remediation costs, but first things first. The Green Mouse glanced at the Elevate site a few weeks ago, and saw no changes. However, now there’s an alteration, and it’s a strange one.

We speak here of the wedge outlined in blue.

Andres’ other Elevate listings show his Floyds Knobs home address, but this one doesn’t.

300 Erni Avenue should be a familiar address to regular readers.

The Green Mouse can find no evidence indicating that Andres has donated to Gahan4Life for the privilege of playing, but maybe the bunker drain trust is taking no chances and hiring him to work at NAHA, as they did councilman Matt Nash.

Meanwhile, the two former Lang Auto properties are still shown as being owned by Andres. 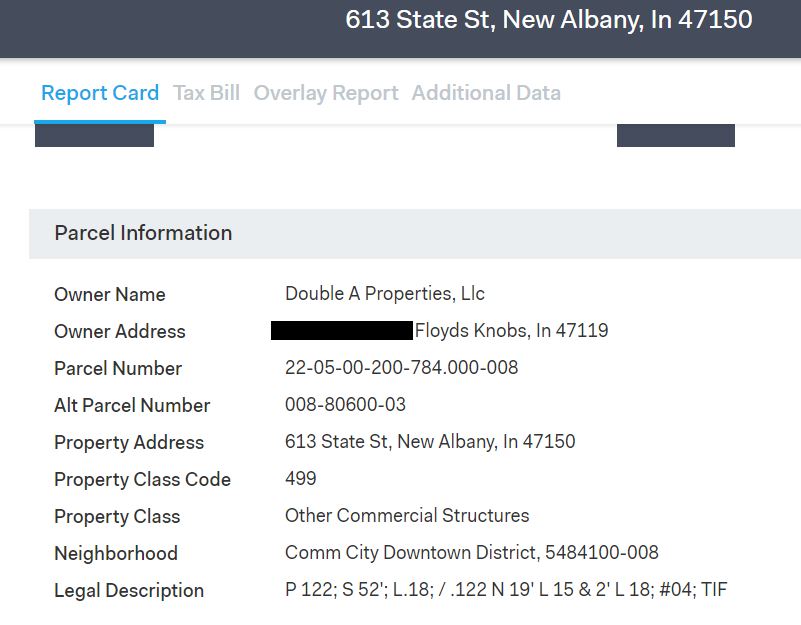 It seems Andres already has a fall-back strategy at the former radiator shop on Vincennes. It’s in his son’s name, which may or may not be important.

There’s an over-arching question of the sort newspaper reporters might ask during those rare idle moments between penning columns urging religious zealotry. In caps, so perhaps Chris Morris sees it:

WHY HAS NAHA EMBARKED ON A COMMERCIAL PROPERTY-BUYING SPREE?