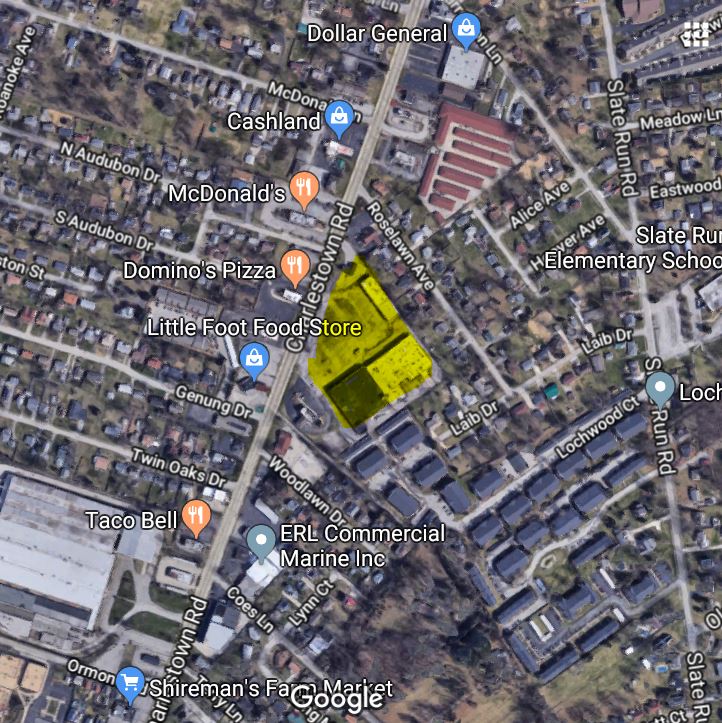 In 2015 after two city council terms John Gonder ran afoul of the mayor’s DemoDisneyDixiecratic patronage machine and lost his re-election bid, moving on to other things in life. John had a blog but didn’t use it all that often; when he chose to write, the results invariably were thoughtful and indicative of interests outside our city’s self-imposed political boxes.

On Sunday evening John made this comment to yesterday’s Colonial Manor post: Colonial Manor redevelopment visioning to be the subject of a public meeting on Wednesday at 5:30 p.m.

This run at revitalizing Colonial Manor caused me to look back at something from ten years ago. It might still be worth considering. The points relevant to the current situation appear in the final three paragraphs. Here’s the link.

That’s right. Colonial Manor was being discussed ten years ago during Barack Obama’s first term — and Doug England’s last. Since John no longer actively blogs, I’m reprinting the entire post from March 22, 2009, but consider clicking through to view the comments.

There seems to be one big question about future prospects for refurbishment at Colonial Manor: Can anything positive happen there without the use of tax increment financing (TIF) money?

Back to the Drawingboard. Please.


At the most recent City Council meeting, March 19, a development which could have resulted in the relocation of the Charlestown Road Wendy’s to a site farther out Charlestown Road was nixed by the Council.


For those who don’t know, the Wendy’s project cuts out a portion of a large lot for the restaurant while leaving the current zoning in place for an “L” shaped piece of property surrounding the restaurant on two sides.


In an attempt to extract something meaningful from the proceedings, I would like to offer an idea that could have possibly yielded a different outcome. At least it could have changed my vote. Unfortunately I’m not holding my breath waiting for the missing ingredient, because that missing ingredient is found in such short supply among developers hereabouts. The ingredient? It goes by several names: innovative thought, creative approaches, getting ahead of the curve, anticipatory development in recognition of the changes suggested by new environmental realities.


That is, after three or four years on the New Albany Plan Commission and now starting the second year on the City Council, I have yet to see more than about two developments that might fall outside the unflattering catchall categorization of cookie cutter sameness.


Look at any of the patio home developments. These are offered as a response to a demographic change in our culture. Aging people are downsizing their households yet still want independence and convenience. So far, so good. A curbside assessment of the typical patio home,however, looks like, in Jeopardy fashion, an answer to the question “Where can my car and I go so both of us feel at home?” The street presentation is of struggle for dominance between the garage and the living quarters. From all appearances, the cars are winning out with the most prominent digs.


Are the developers stupid? The buyers? No, I don’t think so. On the contrary, the patio homes I’ve seen from the inside appear well built and comfortable and suited to the needs of the people living there. But it would be difficult to find a current mode of housing design that more glaringly exemplifies the cookie cutter school of thought.


But the Wendy’s development, ( if indeed it is a Wendy’s, and there’s truly no way to know that at this juncture, according to counsel ) is a commercial development, so what’s that got to do with cookie cutters and patio homes? Again, it’s the lack of a creative or innovative approach to the puzzle of what to do with that parcel of land. Clearly no one who holds an economic interest in the land sees doing nothing, or next to nothing, as a viable option, otherwise they might consider leasing it to an agricultural entrepreneur who could open an “in-town” small scale u-pick farm. Would there be enough customers for such a thing? Surely not in that end of town.


I just erased several paragraphs in which I suggest what the developers could do with the land. The reality is, that just like with the patio homes, the developers failed to offer anything innovative. As if to underscore the fact that they were offering nothing innovative, they weren’t even offering a plan to bring in a new hamburger joint, they were simply going to move an existing hamburger joint to a new location; on the same road yet. And for this accommodation of the developers’ plans, the existing neighborhood residents were being asked to suck it up in the cause of progress and free markets.


So maybe it shouldn’t all be left up to the developer.


One of the best ways this type of situation could be headed off in the future is for the City of New Albany to begin a reorientation away from greenfield development and toward REdevelopment. (As was stated in the Council meeting, fast food restaurants typically use up a building in a pre-ordained period of years and then move to a new location.) Charlestown Road from Eighth Street out to Klerner Lane is showing signs of commercial and residential neglect and deterioration.


A prime example is the Colonial Manor shopping center, across the street from the current Wendy’s site, abandoned several years ago by Kroger in favor of a new site across from the proposed Wendy’s site. If the city were to acquire the property it could solicit proposals from developers to take that property back to the level of vibrancy needed to make a strong neighborhood. The use of Economic Development Income Tax (EDIT) funds could be used to buy the property thus freeing the developer from the carrying cost of the project during development. Direction by the Plan Commission, through the RFP, could shape the REdevelopment in ways most beneficial for the entire community. The developer would make a profit but only by producing a worthwhile, cohesive project. And when the developer is out of the deal the EDIT funds would be returned.


This would be a better way to steer the development of the community in ways that truly benefit the entire community, not simply the narrow interests of the developers. If Colonial Manor were, in fact, redeveloped it is quite possible that the entire Charlestown Road corridor would be seen as more desirable and unfortunate situations such as the one involving the Wendy’s project might be avoided.