The past week slipped away from me, and I fumbled the opportunity to wish a happy birthday to Bank Street Brewhouse, my former business “where the day old bread store used to be.”

You hear that reference less and less these days. After all, it’s been ten whole years since BSB opened; the date was March 12 (or maybe the 13th) of 2009. It’s a decade later, and a while since I’ve been gone from it, but beer still is being brewed and food served (Taco Steve).

Disappointingly, there remain three big holes (surface parking lots) in the urban fabric on the small block of Bank between Spring and Elm. I’d always hoped that we’d see them filled, damn it.

But as usual, I digress. The forthcoming ten-year downtown anniversaries I could find on short notice:

Of course, acknowledging that RCW currently is on hiatus, and I’m probably forgetting someone else, too. When did Exchange open, very late 2012 or early 2013?

Here’s something I wrote about the Bank Street Brewhouse building almost 11 years ago.

My first foray into the history of the future NABC Bank Street Brewhouse building at 415 Bank Street in New Albany yields the following information. In short, the current building on Bank Street came about as an annex/extension of a bakery business located just behind it on Pearl. All years below are approximate. The bakery company that absorbed Grocers in 1959 is variously referred to as “Rainbo” and “Rainbow.”


1919
Model Baking Co. is incorporated and baking begins shortly thereafter at 414 Pearl Street, directly across the alley from 415 Bank Street.


1949-1950
Grocers Baking Co. acquires house at 413/415 Bank Street, tears it down and builds current building soon to be used by NABC to brew beer. The building becomes the bakery’s service area and garage for route trucks.


1955-1956
Remaining houses on each side of the bakery’s Bank Street garage disappear and become parking lots. The south parking lot originally was used by Cora Jacobs Realty and Union Bank, and now is owned by attorney Rick Fox. The north parking lot was for the bakery/garage. Interestingly, the building brought down to provide the future NABC parking lot housed the New Albany chapter of the Women’s Christian Temperance Union for more than thirty years, and perhaps longer (hardbound street directories went back to 1922, and I ran out of time to go to microfiche).


During the same time span (20’s – 40’s), the house that now belongs to Ricke & Associates boarded students from a local Bible college.


1959-1960
Grocers Baking ceases to exist and becomes Rainbo. How this was transacted isn’t clear.


1975
The Floyd County Museum gets an Indiana Arts Commission grant to paint a “supergraphic” on a downtown New Albany building. The south wall of the former bakery garage is chosen, and Larry Dalhover, a New Albany artist and dance instructor, wins a competition sponsored by the museum. Dalhover’s design is painted in one day by a St. Marks UCC youth group.* 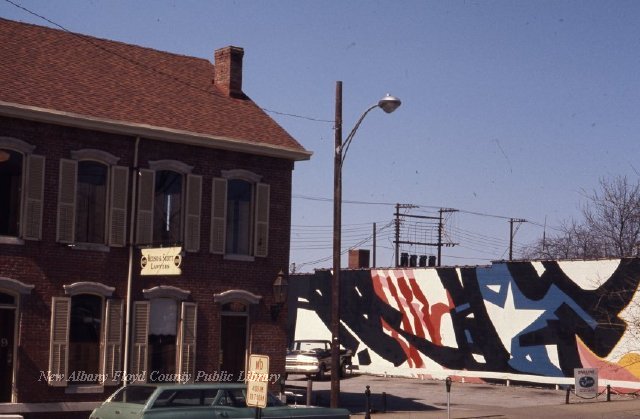 1980
For the sake of “modernization,” Rainbow installs vinyl siding and a faux façade on the Bank Street side of what they have started referring to as a “thrift” store, otherwise known to many as “the day old bread store.”


1985
A Tribune photo shows a newly created vacant lot at 414 Pearl Street and exults: “Downtown keeps improving … The old Rainbow Bakery building on Pearl Street has now been demolished … others will be torn down back to the city parking lot.” 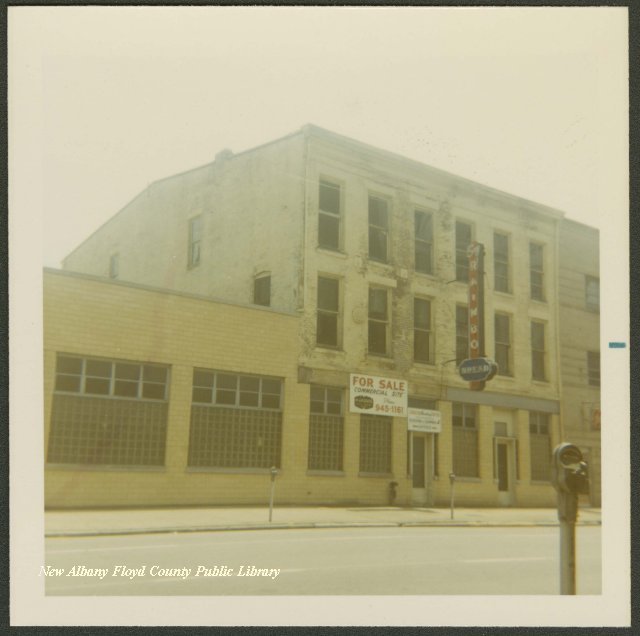 2006
Rainbo closes the thrift store, and the building goes up for sale.


* Information from the February, 1975 edition of Louisville magazine, (pg. 75; “They Were Wall-Eyed!”) The unknown author provides grist for the debate over how to identify a resident of New Albany with this line (italics added): “The next morning New Albanians heading downtown to work and shop did a genuine double take.”