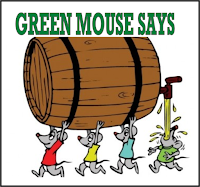 The Green Mouse has learned from multiple sources that earlier this year former building commissioner David Brewer (now the township trustee) inked a year-long consultancy contract with Jeff Gahan’s ever conniving helpful City Hall for somewhere in the vicinity of $14,000. If this information is true, here’s why it matters.

In the aftermath of the 2018 election, NA Confidential asked a question.

Congratulations to David Brewer, hitherto one of the least objectionable and most functional of Team Gahan’s appointees. David needs to clarify one point immediately: Does he intend to remain in a salaried position as Building Commissioner and draw the township trustee’s pay?

But those local Democrats most inclined to laughingly dismiss the relevance of our concern already have savagely criticized newly elected Republican assessor James Sinks for doing precisely that — earning full-time pay as both as a teacher and the assessor … much to the open chagrin of his own political party.

As a point in his favor, Brewer chose not to push this particular envelope. Take it away, Papa.

… (David) Brewer said the job of building commissioner was eye-opening in many ways, including seeing so many needs in the community. That is what prompted him to run for New Albany Township Trustee last year. He wanted to do more to help people, to get them back on their feet.

Brewer, who took office on Jan. 1, said he had no intention of being a politician, or running for political office prior to his 2018 run. He was content for nine years being the city’s building commissioner. But something moved him to toss his hat into the ring against a popular incumbent, Republican Steve Burks. Brewer’s first taste of politics was a successful one. He wound up beating Burks by 1,443 votes.

“I never thought I would get into politics. You see things [in politics] that just infuriate you,” Brewer said. “It can be very divisive. But I want to do what I can to help people.”

In light of today’s consultancy revelation, it’s this part of the story that might be, well, divisive.

Brewer said he will take a pay cut to be township trustee, but money is not what motivates him. Helping those in need is what lights his fire.

According to the state of Indiana’s public employee compensation on-line search tool, the New Albany Township trustee’s annual salary is $40,000, while the City of New Albany’s building commissioner earns $54,000.

Two birds, one stone; Gahan potentially now has greater (if not completely unfettered) access to the township trustee’s bank account, and Brewer doesn’t take a pay cut at all. Everyone’s happy, except those of us who stubbornly persist in favoring fair play and a level playing field.

Apart from the Green Mouse’s perspective, allow me to conclude with a personal point of view: I’d be delighted if this rumor turns out to be false, and I’ll happily correct the record if it does. Brewer always has seemed somewhat benign in the larger context of Gahan’s systemic corruption; I realize there are others who’d disagree. Maybe I was hoping against all available evidence that there’d be something or someone not tainted by Gahanism’s elemental toxicity.

But there’s a remedy for enduring disappointment: #FireGahan2019