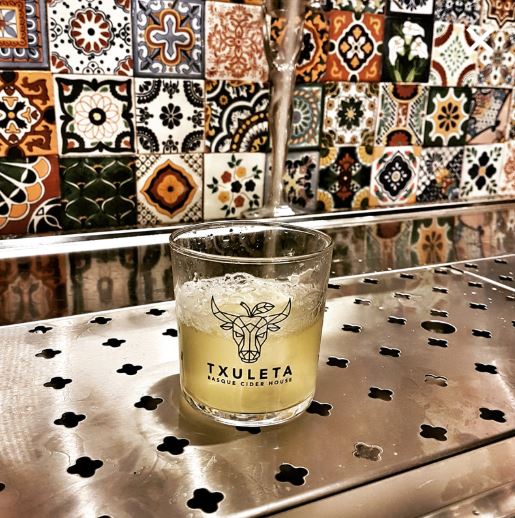 It’s wild fermented like an “aulde scrumpy,” with tangy yeast flavors, strong mid-tannins, crab apple edges — earthy, oaky and fizzy — and a great favorite ours from Steve and the gang at the Thomas Family Winery in Madison IN.

For the time being, it’s too late for you to try some of this cider, but varying availability is a misunderstood facet of small-scale production. When Steve has certain types of apples to his liking which are of sufficient quality, he’ll make more. That’s the allure and glory of it, not a deficiency or a problem to be solved.

In olden times before refrigeration, brewers couldn’t brew during the heat of summer. They made as much beer as they could, while they could, before the weather got hot. In German lands, some of what was brewed in spring was stored in cellars, to be safeguarded until tapping many months later for harvest fests. They’re what we know today as Oktoberfest, and if you couldn’t have any of it in July, you drank something else and waited until September.

Obviously there are dozens of cider brands available throughout the year, something Matt McMahan foresaw a few years back when he began exploring the notion of a cider bar in New Albany. Matt chose not to follow through with these plans, but it was a good idea, and here’s an example from California.

Redfield is a good-looking new bar and bottle shop in Rockridge, with lots of natural light and just the right amount of indoor plants. It’s got exceedingly friendly service and a constantly rotating set of tap handles. It’s even right across the street from the Ramen Shop, making it the perfect way station for those who have put their name in for an hour-long wait.

Sounds perfect. What could go wrong?

Well, Redfield is a cider bar — a category that’s still, even for many Bay Area gourmands, terra incognita. And Redfield’s owners, Olivia Maki and Mike Reis, know they’ve got their work cut out for them.

I’m not a fan of the sweet, soda pop variety.

Perpetually in the shadow of its fermented-beverage counterparts, cider has yet to break free of the chains of wine and beer comparisons. For some beer drinkers, cider is too funky; for some wine lovers, it lacks structure. Both categories of people tend to believe, mistakenly, that it’s always sweet. It’s an afterthought on most restaurants’ drink lists, an obligatory entry for the would-be beer drinker who can’t consume gluten.

At this juncture, I’ll insert a plug for the Txuleta Basque Cider House in Indianapolis, located directly above and sharing ownership with Brugge Brasserie in Broad Ripple.

There are three hard and fast rules for introducing the unknown to the unknowing: education, education and education.

In other words, they’re making it easy for you. But for a category so maligned and misunderstood, is that enough?

“By far, the most common misconception we encounter is that all cider is sweet,” Reis says. And the cider industry isn’t exactly helping to demystify that. Lots of sweet ciders are mislabeled as dry, while many actually dry ciders might be perceived as sweet, simply because they’re exuberantly fruity.

If you decide to pick up the ball, seize this idea and create a cider bar in downtown New Albany …