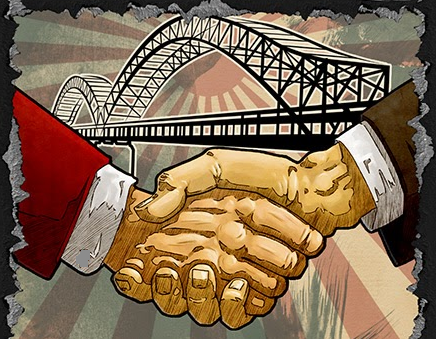 “Out there is someone who maybe disagrees with you on politics, but that person has a shared vision with you on making our cities, towns, and neighborhoods stronger. We need each other.”

Lots of what I’ve been writing in this space since 2015 reflects what the movement’s founder Charles Marohn calls the Strong Towns approach.

The Strong Towns approach is a radically new way of thinking about the way we build our world. We believe that in order to truly thrive, our cities and towns must:

+ Stop valuing efficiency and start valuing resilience;
+ Stop betting our futures on huge, irreversible projects, and taking small, incremental steps and iterating based on what we learn;
+ Stop fearing change and start embracing a process of continuous adaptation;
+ Stop building our world based on abstract theories, and start building it based on how our places actually work and what our neighbors actually need today;
+ Stop obsessing about future growth and start obsessing about our current finances.

But most importantly, we believe that Strong Citizens from all walks of life can and must participate in a Strong Towns approach—from citizens to leaders, professionals to neighbors, and everyone in between. And that means we need you.

Marohn is honest about the challenges of broadening his organization’s appeal among women and minorities, but he also identifies an area of unequivocal success. When I say there is a third-way policy position in communities like ours, this is precisely what I’m referring to.

Living with the Other, by Charles Marohn (Strong Towns)

… There is one place, however, where Strong Towns has a level of diversity that is as rare as it is powerful among American organizations in 2019: ideological diversity. We have people who enthusiastically identify as politically left-of-center, and we have people who enthusiastically identify as right-of-center. When Strong Towns supporters get together, it is this crazy mix of people we don’t see in other places. We don’t occupy the center—this is not a movement of moderates. It’s something different.

I’m convinced that is the key to our rapid growth and long-term success. You can be passionate about fiscal responsibility and small business and love Strong Towns. You can be passionate about equitable transportation and environmental stewardship and love Strong Towns. And that love can be authentic because we can meet those shared goals with a Strong Towns approach. It’s not a gimmick, and the people coming here understand that.

We’re entering into what I anticipate will be the craziest, nastiest, most media-manipulated, dysfunctional campaign season any of us will hopefully ever be subjected to. Regardless of your political point of view, you are going to be pummeled with messages designed to fill you with outrage at the other. Some of it might be true, and your outrage might be justified, but much of it will be half-truths designed to mobilize you to action. There will be less and less room for context and nuance.

I’m not asking you to change your opinions. I’m not asking you to moderate your point of view. I’m not even asking you to equivocate and accept any opposing viewpoint as equally valid. All I’m asking you to do is to recognize that the greatest strength of our movement is our unique ideological diversity: that out there is someone who maybe disagrees with you on politics, but that person has a shared vision with you on making our cities, towns, and neighborhoods stronger. We need each other.

In our discourse, Strong Towns advocates must try to be the peacemakers. The ones who turn down the volume. We can disagree without the hate. We may even extend an assumption of good intentions, and hope for the same in return. We might be pleasantly surprised.

Psychologist Jonathan Haidt shared a New Years Resolution for our age. I think it is the standard all Strong Towns advocates should strive to follow:

I will give less offense (i.e., be more polite)

I will take less offense (i.e., give others the benefit of the doubt)

I will pass on less offense (i.e., not be the sort of retweeter Russian trolls want me to be)

I have not always met this standard. It’s difficult, and I’m all too human. Today let’s promise each other that we will strive to do so, and then let’s hold each other accountable.

As an addendum: For those readers puzzled by the fact that Roger the Flagrant Social Democrat finds it easier to chat substantively with local Republicans than many (though not all) Democrats, consider the possibility that local Democrats most enamored of the imperial Gahan approach to top-down patronage-disguised-as-infrastructure-improvement — which itself is a refutation of the Strong Towns approach — are rejecting my message because of this dissonance, and not any significant difference when it comes to left/liberal social justice and human rights issues.

That’s because there are no differences between us when it comes to social justice and human rights issues. But too many local Democrats are unwilling to give due, detailed diligence to the Gahan personality cult’s claims of brilliant fiscal management, which plainly is an illiberal and ruinous bait ‘n’ switch. Republicans see THAT part quite clearly.

As Marohn observes, the Strong Towns approach bridges a gap. It’s an approach suitable for the city as a whole, especially the historic core, and if you’re a voting resident of the 3rd district, you’ll be hearing a lot more about this as the months pass.