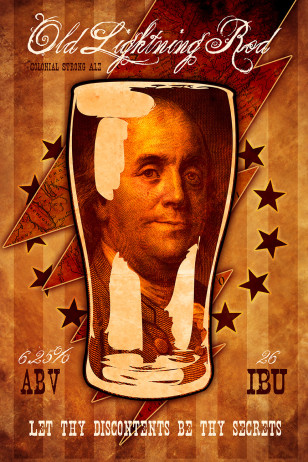 We were talking about molasses just the other day, although in a different context.

All about the Great Boston Molasses Flood of 1919, which is no laughing matter.

I stopped by my former NABC stomping grounds this afternoon to pick up a pizza. Old Lightning Rod went on tap a few days ago, and it remains totally on point. All kudos to the brew crew.

Later during a conversation about the background of Old Lightning Rod …

… it occurred to me that during the years following this first use of molasses at the brewery, we also deployed sorghum as an adjunct on more than one occasion. The upshot: Molasses and sorghum are similar, but different.

The Difference Between Sorghum and Molasses, by Max Bonem (Food and Wine)

What’s your sweetener of choice—honey, agave, stevia? How about molasses or sorghum? You may not keep them in the pantry, but your grandmother probably did. Molasses has always had a following among bakers, but a new generation of Southern chefs has recently reintroduced sorghum to the public. Here’s a look at how the two dark-hued sugar substitutes differ.

They have different origins.
While both sorghum and molasses arrived in the United States during the 17th century, they have very different origin stories. The sorghum plant, which is a grass, arrived with the African slave trade and spread throughout the American south due to its resilience against hot temperatures and dry conditions. The syrup was then developed as a sugar and molasses alternative. Molasses, on the other hand, was brought to the U.S. from the Caribbean, the epicenter of the sugar cane industry, to be used in rum production. Up until the 19th century, molasses was even more popular than sugar due to its cheaper cost.

They have different production methods.
Sorghum syrup is made from the green juice of the sorghum plant, which is extracted from the crushed stalks and then heated to steam off the excess water leaving the syrup behind. Conversely, molasses is the by-product of processing sugar cane into sugar. Sugar cane is stripped of its leaves and the juice is extracted from the cane by crushing or mashing. The juice is then boiled to concentrate it, which produces crystallization of the sugar.

They have different flavors and consistencies.
Sorghum tends to have a thinner consistency than molasses, along with a slightly more sour taste. Additionally, molasses comes in multiple varieties. When molasses undergoes its first boiling and the sugar crystals are removed, the result is called “first molasses,” which is its sweetest form. “Second molasses,” which is considerably milder, is created from a second boiling and then “blackstrap” is the result of a third boiling. It’s considered bittersweet.

They are used differently in the kitchen.
While using either one is mostly just a matter of personal preference, molasses is traditionally used for baking in the U.S., while sorghum is more popular as a syrup on its own or as an ingredient in salad dressings and barbecue sauces.