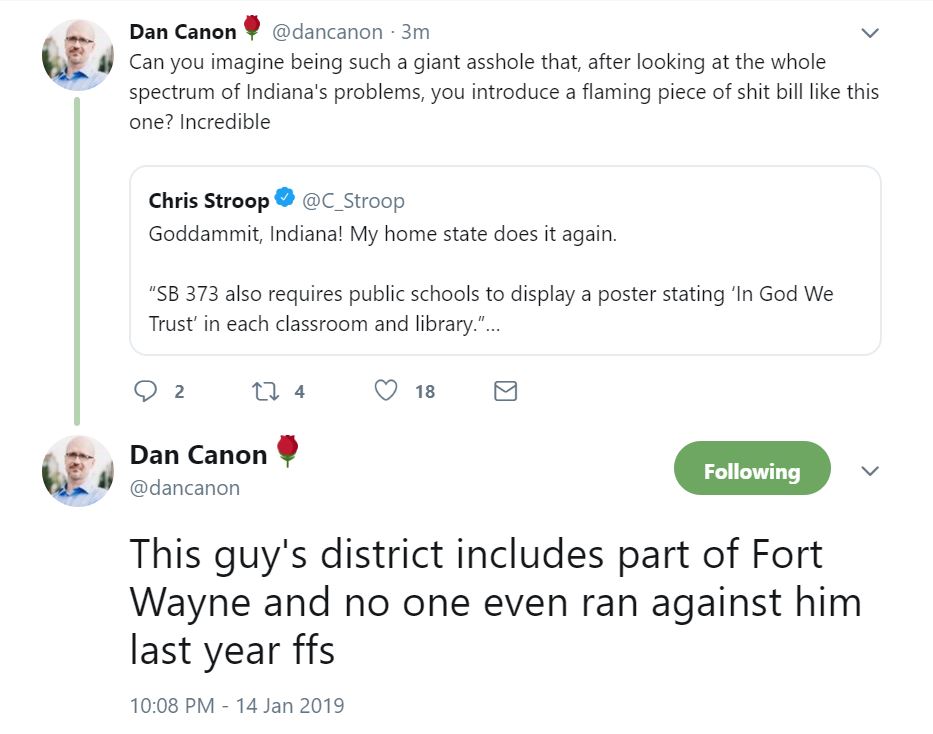 The giant anus to which Dan refers:

The sponsor of the bill, Dennis Kruse (R-District 14), has a long history of sponsoring anti-evolution legislation.

Ah, the joys of Hoosierness.


Creationism would be taught in Indiana public schools, indoctrinating students with biblical literalism, if Senate Bill 373 becomes law. The Center for Inquiry (CFI)—which advocates for reason, science, and secularism—has promised to take all necessary legal measures to oppose the bill’s passage or implementation.


Senate Bill 373 would permit Indiana public schools to teach “creation science” as an alternative to the scientific theory of evolution. Creation science is a purely religious teaching that is unsupported by actual science. In 1987, the U.S. Supreme Court ruled in Edwards v. Aguillard that the First Amendment’s Establishment Clause protects public school students from indoctrination in religious ideas such as creation science.


“The children of Indiana deserve a high-quality science education. It is their right to be properly taught the fundamentals of biology,” said Bertha Vazquez, director of CFI’s Teacher Institute for Evolutionary Science. “How else will they be able to compete in an increasingly competitive college entrance process and the national job market? The parents of Indiana should be outraged that their own children will be subjected to the willful ignorance of a few legislators.”


SB 373 also requires public schools to display a poster stating “In God We Trust” in each classroom and library.


This is similar to model legislation promoted by the Christian nationalist Project Blitz, an effort by the Congressional Prayer Caucus Foundation to impose Christianity on Americans through operation of law. The Project Blitz manual encourages religious Right lobbyists to advocate for Christian nationalist legislation in their home states beginning with symbolic “In God We Trust” bills. Additional legislative initiatives would allow religious discrimination against women seeking reproductive health care, same-sex couples, transgender people, and other marginalized groups. CFI stands with our secular and interfaith partners who oppose the goals and methods of Project Blitz. We see it as a full-on assault on one of the nation’s founding principles: that religion and government shall be separate.


“Secular education promotes critical thinking and religious freedom,” said Robyn Blumner, CFI’s president and CEO. “Students deserve instruction in real science, without taxpayer money being used to proselytize a narrow version of Christianity that subscribes to unscientific notions of how the universe came to be. If parents want to give their children this type of religious instruction, they are certainly free to do so, but they need to do it on their own time and their own dime, not paid for from the public purse.”


The Center for Inquiry (CFI) is a nonprofit educational, advocacy, and research organization headquartered in Amherst, New York, with executive offices in Washington, D.C. It is also home to the Richard Dawkins Foundation for Reason & Science, the Committee for Skeptical Inquiry, and the Council for Secular Humanism. The Center for Inquiry strives to foster a secular society based on reason, science, freedom of inquiry, and humanist values. Visit CFI on the web at centerforinquiry.org.