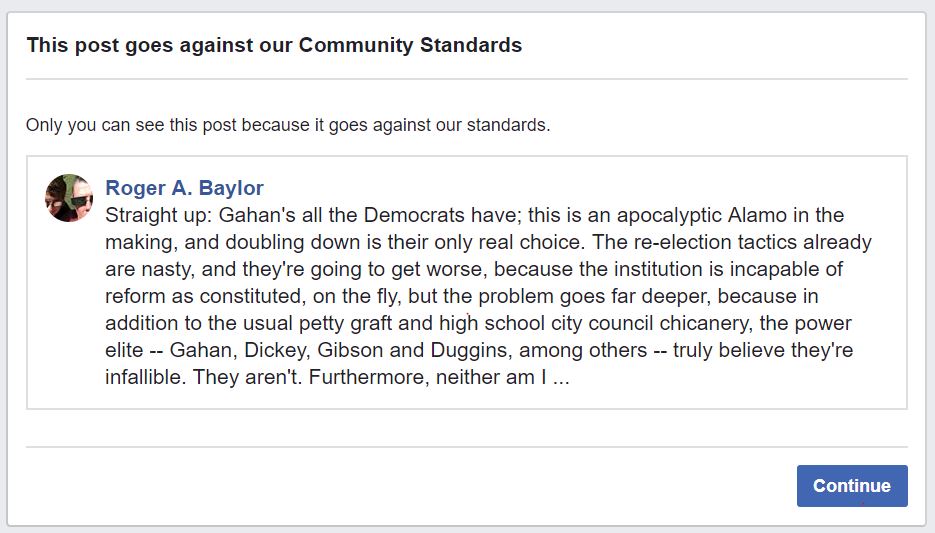 What once resembled an online high school reunion now feels now like the 5 p.m. bitch session at the Peoria Applebee’s.

Boy, does this piece hit the nail on the head. As an elder/uncle/old white male who has retained most of his marbles, I see this all the time from old friends and former (even current) customers. Now they’re foaming at the mouth.

Me? I reserve that sort of thing for Dear Leader.

Twilight of the Racist Uncles, by Ed Burmila (The Baffler)

How Facebook is melting the minds of our elders

THERE IS A FAMILY FRIEND, a man I’ve known for decades. A highly educated man with total financial security in his recent retirement. A man who always had a good story to tell or an interesting side of a conversation to hold up. Then, a few years ago, he got on Facebook. Reading his timeline became an exercise in watching a man’s descent into madness. Over the summer I was surprised to learn that he had purchased three very expensive AR-15 semiautomatic rifles. When I asked why, he said, “For the race war that’s coming” in a tone that suggested no further explanation would be necessary.

If you are under the age of fifty, the odds are that you have at least one older person in your life who has gone down this road in the last few years. If you are white, I am certain of it. Lamenting our older relatives’ journey down the rabbit hole of right-wing paranoia and vituperation feels, at times, like my generation’s version of having the big talk about putting Nana in a nursing home. “Losing a parent” has dual meanings for us after 2016. We’re dealing with the loss of people who are very much alive—but who have become such chaotic stews of anger, persecution complexes, racism, and half-assed conspiracy theories that they can no longer hold a normal conversation.

Intergenerational tension is hardly new; it dates roughly back to mankind’s mastery of fire. In this case, though, more than a typical generation gap separates us, thanks to a nearly irresistible system designed to draw in old white people and get them hooked on an outrage fix they end up needing every bit as much as their Lipitor.

Though Fox News binging is typically blamed for this phenomenon, viewership data doesn’t support the argument. Fox News tops cable news ratings, but cable news is a small, declining market compared to, say, televised sports, Netflix streaming, or anodyne sitcoms. The number of people sitting saucer-eyed in front of the TV all day watching News Corp render the arts of satire and parody moot is significant in Nielsen terms but quite meager compared to the audience of Monday Night Football.

What has truly fueled the Boomers’ transition from “means well, but sometimes frustrating” to Trumpian insanity is Facebook. There the fix is constant. There all of their worst impulses are collectively reinforced, constantly rewarded, and ceaselessly amplified.

The last generation of Americans who will enjoy anything approaching financial security in old age could spend the Golden Years we’ll never have golfing, going on cruises, driving RVs, or watching The Price is Right. They could choose to be happy, having lived their entire lives in a system from which they extracted every benefit and which they subsequently dismantled at the altar of lower taxes.

Instead, they’re spending their days on a speedball of right-wing propaganda and a platform that gives them an audience of . . . well, everyone. And it turns out that 24-7 access to reinforcement and an unceasing stream of conspiratorial thinking is pushing some of them over the edge …