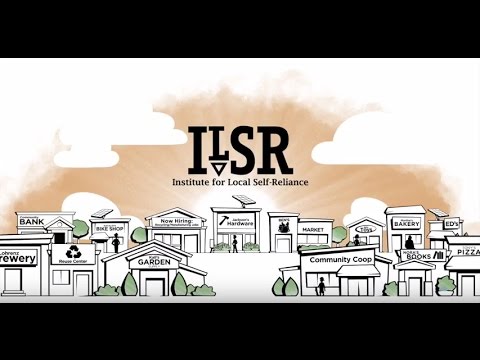 I’ve arranged Stacy Mitchell’s tweets in essay format. As Mitchell notes, the discussion goes back several years, and here’s one of ours on the topic; it was another fruitless attempt to convince Develop New Albany to lead discussions that actually matter to local independent business owners.

It’s always worth re-examining the consequences of civic and corporate greed colliding.

Big-box retailers like Walmart & Target are not economic development. They’re a form of economic extraction. Always have been. Now they’re engaged in a new phase of extraction that’s costing communities even more.

This tactic is crippling the finances of many local governments, forcing homeowners & small businesses to pay higher tax bills.

In Texas, for example, the state’s comptroller says cities and schools will lose $2.6 billion in revenue per year because of big retailers’ “dark store” property tax claims.

(As an aside: this has been strangely slow to get media notice. We wrote the first national story way back in 2015 … Finally @CityLab and the @nytimes have done in-depth pieces recently.)

I have mixed reactions on who to blame. On the one hand, the mega-retailers are nasty. They came in promising lots of tax revenue to these towns. But their goal has always been to extract as much as possible & leave as little money behind as they could.

On the other hand, many city officials have been so stupid about big-box stores. There was plenty of evidence 10-20 years ago that approving these stores was a bad idea.

Big-box stores drove massive consolidation in the retail sector. About 100k local retailers disappeared in a decade. More jobs were lost than created. Civic and social networks deteriorated as Main Street did.

This was all known at the time. There were published studies on the net job losses, for example. I wrote a book in 2006 called Big-Box Swindle. People like @SprawlBusters went around the country explaining the consequences of saying yes to Walmart’s store proposals.

Some places got it. Vermont said no to big-box retail in a sweeping way. Today VT has more small businesses per capita than any other state. And not a lot of vacant retail.

But most cities and towns, often over the objections of their residents, said yes, yes, yes to the big boxes. The main reason was all that tax revenue.

You don’t have to be expert in city finances to see why this was so dumb. Just think about it. First, sprawl is super expensive. Big box stores cost local governments a lot more in services, like road maintenance & police, than compact “Main Street” style districts do.

Second, even when they’re new, big-box stores generate far less tax revenue per acre than downtown and neighborhood business districts do. This is because parking lots have little value and their buildings are cheap too.

Walmart, Home Depot, Target – they all presented a very different picture to cities about how this was durable economic development. But city officials should have known better. It was not hard to see the truth.

So this whole push the mega-retailers are making today to have their stores reassessed as basically worthless is them doing the big reveal on what was true all along.

Well-built, multi-story, mixed used business districts can endure for centuries. They are durable, flexible, adaptable as things change. They are great habitat for incubating new entrepreneurs. They are great at nurturing social & civic engagement.

More towns and cities should have defended these districts rather than handing over their future to big-box sprawl.

But – and this is important – I want to be clear about what should happen now. As stupid as city officials were, communities should not be paying the price for Walmart’s wealth and dominance.

The “dark store” tactic these companies are using to slash their property taxes should be outlawed by state legislatures. There are bills in these states to do so. And then cities should pass a special tax on big-box stores to make up for all the additional costs they impose.

Finally, cities need to get wise to the fact that not all development is actually economic development. If it furthers the power of the biggest companies, it’s often extractive.
‏
Here’s your first test, cities: Amazon. Extractive or additive? Should you give it subsidies? Should you shift your procurement to Amazon? Or should you call for vigorous antitrust action to check its power?