Diana and I visited Bavaria (Munich and Bamberg) just before Christmas. Prior to departure, there was a series entitled Munich Tales 2018. This is the sixth of seven installments summarizing what we did, saw, ate and drank. They’re being back-dated to the day we were there.

The weather forecast for Sunday, our last day in Munich, was for steady rain by late afternoon. We reckoned on a half day of sight seeing if we were lucky, then a return to the hotel for a casual evening. Having slept in, our start came late … at lunch.

Munich always has been about the major brewers whose presence has done so much to make the city a beer lover’s pilgrimage site.

Paulaner and Hacker-Pschorr merged a long time ago, and the received wisdom nowadays is that almost all the beer for both breweries is brewed at the Hacker-Pschorr facility, with the exception of what amounts to a brewpub-sized system at Paulaner’s Nockherberg restaurant and beer garden.

The name of the Nockherberg and two nearby streets can be traced back to the banking family Nockher. The family had settled in Munich in the 18th century and built a summer house on the eastern Isar heights in 1789, the so-called ‘Nockher palace’. It was located on the street known today as ‘Am Nockherberg’.

From the U-Bahn station we walked up the hill and through a serpentine park area with fine views of Munich’s central spires to the north.

I can’t remember whether my previous visit to Nockherberg came in 1995 or 1997, but it definitely was during Starkbierzeit (strong beer time) in March. I can remember drinking a liter Mass of Salvator, Paulaner’s signature Doppelbock, and thinking this was an incredible feat owing to the 7.9% alcoholic strength. Gravity Head, as well as hundreds of 10% – 12% specialties, came to the vicinity of my beer appreciation somewhat later, although in fairness, we never drank beers like those from liter mugs.

At any rate, a fire in 1999 completely destroyed Paulaner’s old, dark beer hall on Nockherberg, and it was rebuilt along more modern lines, then again remodeled a few years ago. The contemporary feel is of a classic Munich brewery merged with a “craft beer” standard brew/gastropub, with a bright and airy interior ambiance featuring almost Scandinavian furnishings and lighter shades of woodwork. The old-school beer garden is intact, just outside.

Overall it’s an interesting reinterpretation of tradition — and the herring salad was very good.

Diana again opted for Currywurst, this time of a more gourmet variety. It’s hard to resist it, whether served as street food or in a sit-down setting. 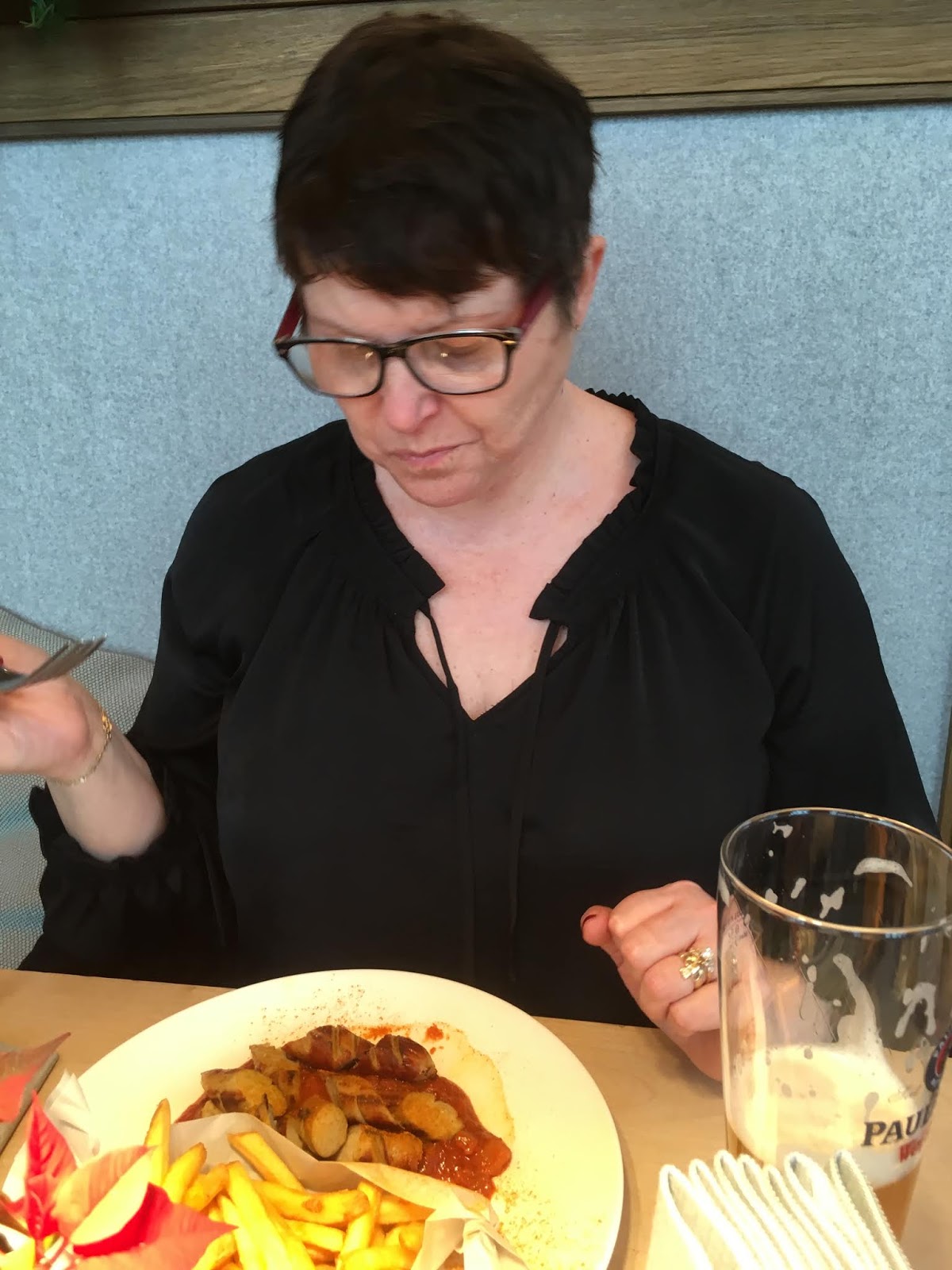 From the maker of Salvator comes this seasonal Helles Bock, clocking in at a deceptive 10% abv, and delicious. Note the quarter-liter pour, a far cry from those big boy tankards of old. 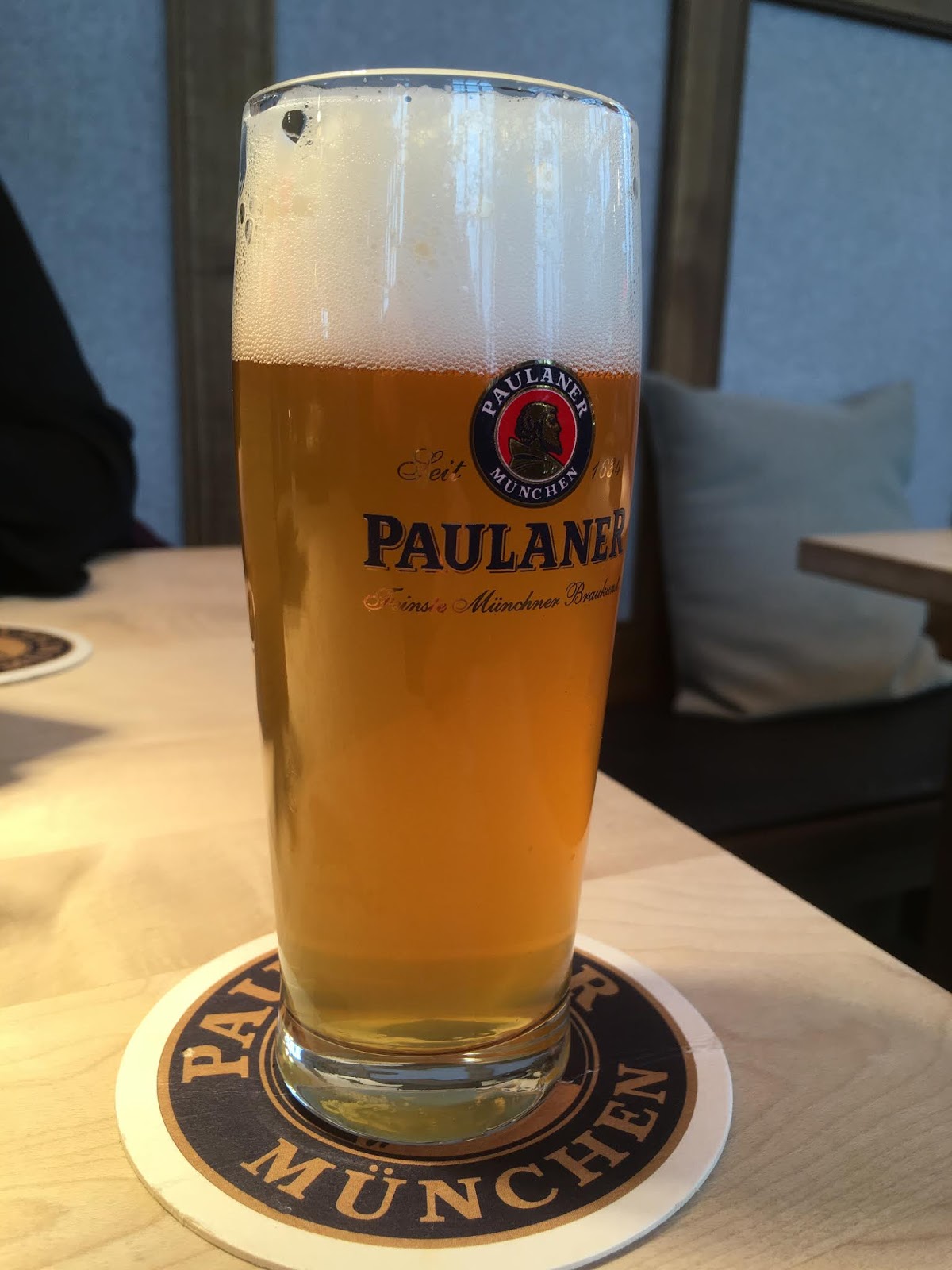 A Radler is a bicyclist, and the beer mixture of the same name is familiar to most of us by now. Perhaps less obvious are Russ and Cola Weizen.

After lunch we opted for a final glimpse of the Marienplatz Christmas market. I was struck by an example of exterior artwork on a building, glimpsed along the way. 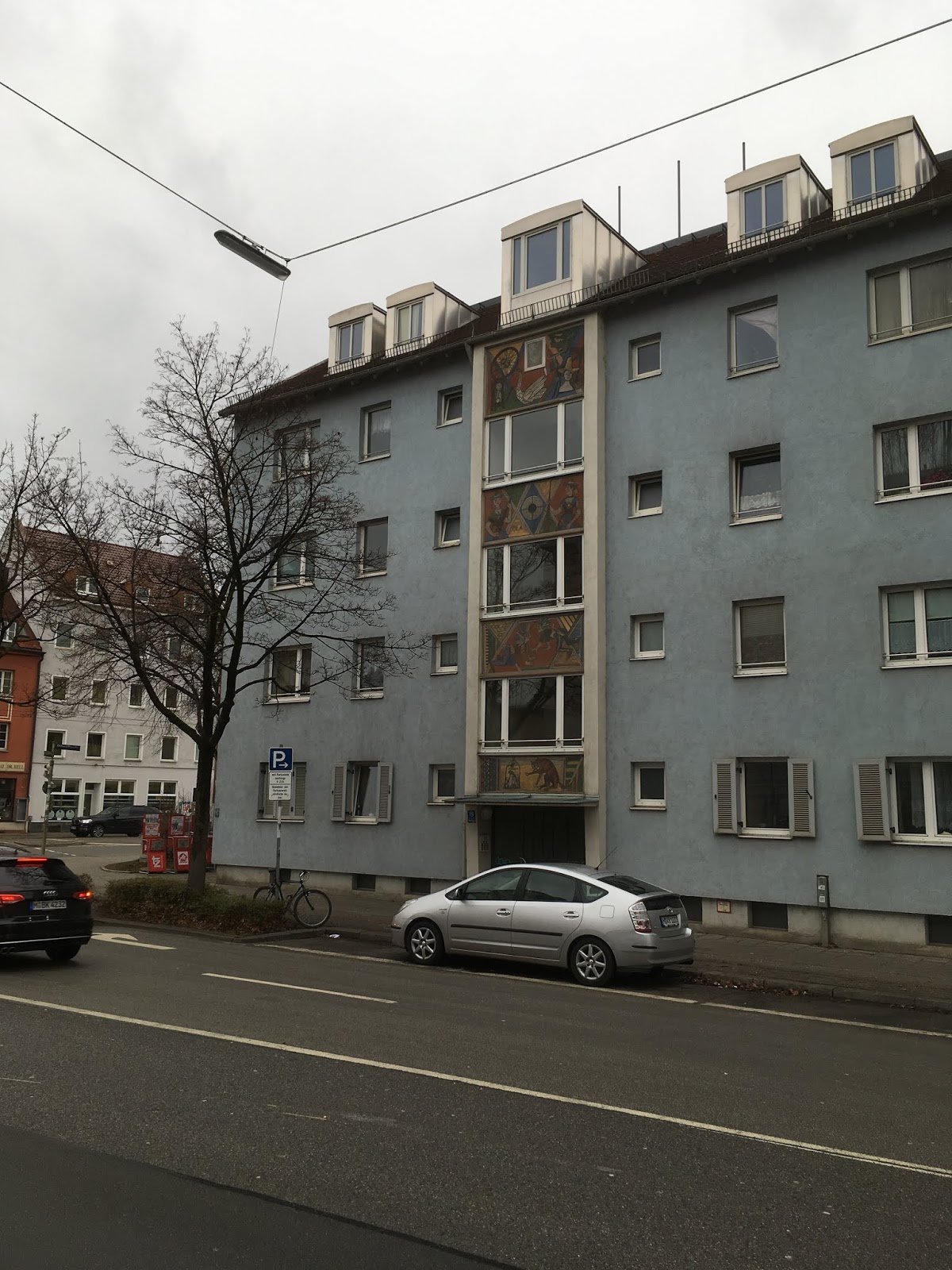 The rain was belated, but once it started there was no stopping. It still was raining on Monday morning when we rose to make our airport commute. On Sunday evening, we stayed close to the hotel. It had a Euro coin operated bottled beer vending machine in the lobby, and there were several “take away” döner kebab (or kebap) restaurants in the vicinity.

It’s nearly impossible to visit Germany and not eat Currywurst or Bratwurst, two ubiquitous sausage dishes. But regardless of the sausage’s fame, it seems that Germans can’t get enough of the döner kebab.

The nation of 82 million people consumes two million kebabs a day, according to Gürsel Ülber, spokesman for the Association of Turkish Döner Producers in Europe (ATDiD). Safe to say, the thinly sliced meat – cooked on a vertical spit, wrapped in pita or flatbread and topped with salad – overrules the sausage-duo as a preferred fast-food option; a prominent symbol of the cultural and economic influence of Turkish immigration on German society.

I believe the one I chose is called Bistro Lavash, and there were plenty of Turkish specialties at the steam table, in addition to the ubiquitous döner. What I liked most about the eatery was its multicultural clientele; rather like tacos in America, döner creates level playing fields, especially for those who’ve been drinking.

It’s so very sad approaching the end of an excursion …