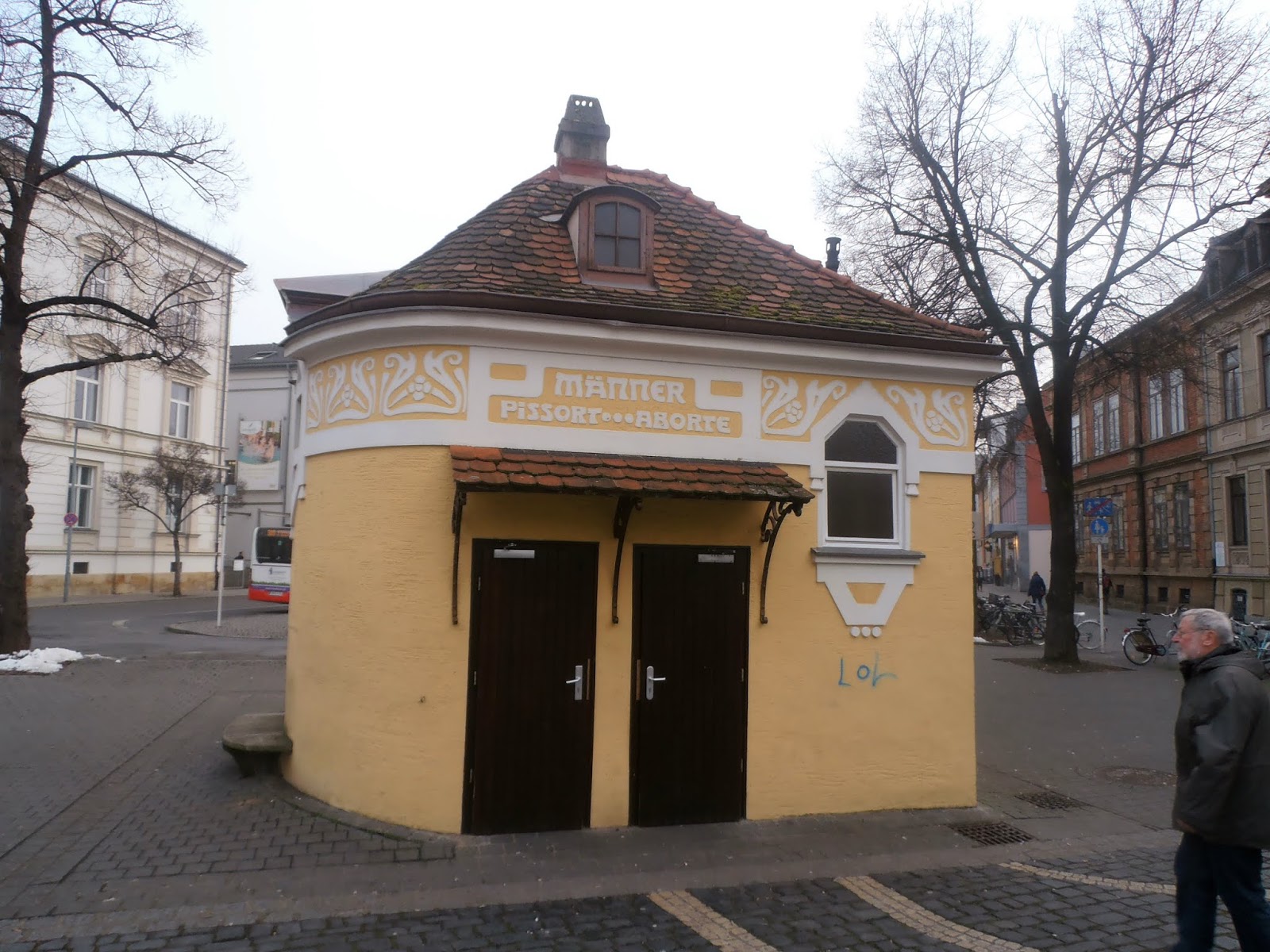 I’m writing these words on the 15th of December, imagining that on the morning of the 21st, I’ll have consumed too many delicious Rauchbiers at Schlenkerla in Bamberg on Thursday night. Vegas won’t touch the action on this particular assumption.

By early afternoon, we’ll be taking the train back to Munich after the overnight stay, and pausing only momentarily before heading to the arena for the basketball game (FC Bayern and Braydon Hobbs vs. Real Madrid).

Prior to leaving Bamberg, something I never find it easy to do, let’s turn back the pages to a post prompted by our 2009 visit during Christmas.

In the purest of anthropological senses it was a revelation to witness the holiday observed with a manner of dignity and traditional restraint, at least by prevailing and manic American consumer standards.

In 2009, the genuine wintry weather in Bamberg provided ample opportunity to drink beer and eat pork indoors, in proximity to grandly tiled stoves fairly pumping heat, with an inevitable chilly contrast when it came time to use the restrooms. While not about Christmas in any specific sense, these observations now invariably strike me as seasonal.

Beer … and the pissoir.

Any farm boy can tell you what happens in winter, when hot liquid hits frozen ground and steam rises, and so my youthful reveries tending our livestock came back to me after I made my way from the toasty upholstered interior of the beer café, through the entry door, across a corridor, through a second door, and outside to where the restrooms were located just off the snowy, arched passageway leading from the street.

They were unheated, with a predictable temperature differential. I was in and out in a flash, returning to cool smoked lager in a far warmer room.

At least there was plumbing, albeit frigid fixtures.

It hasn’t always been the case. In 1999, while drinking draft Baltika in Moscow at a tiny bar located in the concrete bowels of a towering modern concrete housing block, my fumbling water closet query in deficient Russian was met with a shrug. The bar man gestured in the direction of what proved to be a slippery collection of muddy shrubs around the darkened corner.

It may have been Archie Bunker who observed, “You don’t buy beer, you rent it,” and your humble columnist has gleaned a fair amount of experience in such matters in his career as professional beer drinker, especially when imbibing in Europe. Many aspects of the continent’s beer and brewing cultures have changed since 1985, but none more so than a steady escalation in cleanliness and comfort of the facilities at a typical watering hole.

Good, bad or indifferent, my personal theory is that such improvements owe more to the course of the women’s liberation movement than the interest of most males in facets of basic hygiene. In all likelihood, publicans continued pointing to the bushes out back until modernity brought changes in migratory patterns, in the form of female patronage. Only then were modern plumbing solutions contemplated.

Beer and Bamberg (Germany) are gloriously intertwined, which is why I became a regular visitor so long ago. During the 2009 Christmas trip, it suddenly dawned on me that the pleasant modern urinals in the men’s room of Brauerei Spezial (founded in 1536) weren’t there until the late 1990’s. Before that, men urinated into tiled trenches running along the floor. These trenches presumably emptied into the sewer system, although sometimes it’s best to take nothing for granted.

While I hardly can attest to how it was done during the Middle Ages, or even as recently as the 1970’s, my impression is that the process of waste disposal always has differed little from my experience in Moscow, or this one in Albania, circa 1994: A lovely, contemporary wood-lined room with a spotless, modern stainless steel urinal … connected to PVC pipe, which led outside to termination just shy of the town’s riverbank.

Unscientifically speaking, you can look at the many centuries-old brewery taps and public houses in places like Bamberg and see that restrooms weren’t included in the original architectural designs. They were added later, away from the seating areas, often tacked onto the interior courtyards that are a familiar feature of these older buildings.

Modernity has deprived us of the European waste disposal mechanism I miss the least: The fearsome female restroom attendant. Sometimes she was ensconced behind sliding glass windows, but more often she remained seated at a rickety wooden table in front of the battery of stained tiles, guarding her ceramic plate, which was intended for loudly smacking coins into, indicating you’d paid the required tariff and qualified for a square of toilet paper (if really necessary).

In theory, the women were there to keep the area clean, and surprisingly, they often did just that, sometimes while you were otherwise engaged in your business. It made for initial embarrassment, but after all, they were skilled and highly professionals, only doing their jobs.

Male toilet attendants were permitted, but invariably they were less reliable than the elderly ladies, especially as the geography passed eastward from capitalism to communism. When I was teaching English in Slovakia, I was a frequent customer of a venerable drinking establishment where the restrooms were in the basement (not uncommon).

My preferred brand of beer also was the nightly preferred beverage of the subterranean lavatory commandant. Whenever his plate contained the requisite number of coins, he would climb the stairs for another pint of pay package, and by closing time, he could be found unconscious at his post, snoring in the sour, fetid air.