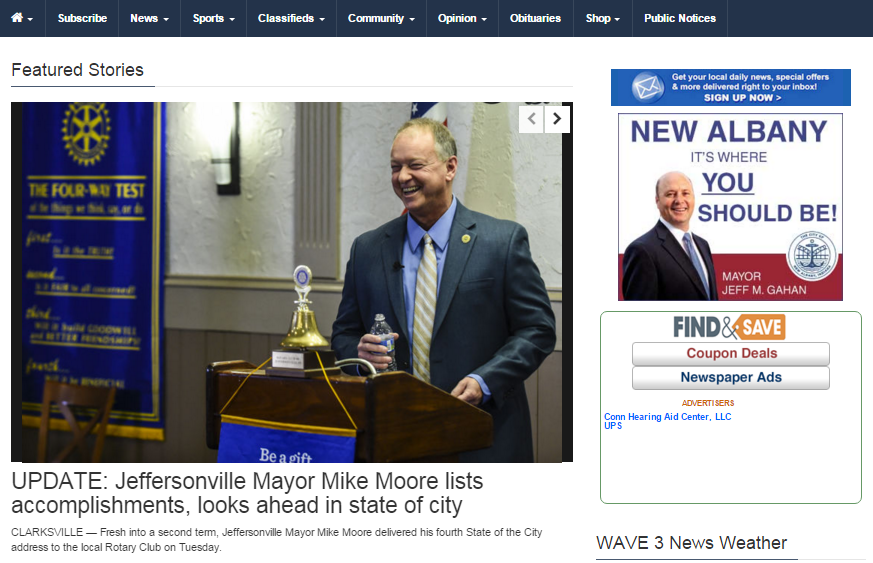 In one week’s time, the mayors of Jeffersonville and New Albany each made a marquee announcement. These bookends are tremendously revealing in terms of fundamental political differences in the two communities.

Mayor Mike Moore aimed high with his “Jeffersonville’s Promise,” described by the newspaper as “a program that will offer qualified Jeff High students a full-tuition scholarship to attend Ivy Tech in Sellersburg.”

Indeed, the devil lurks in dozens of details, and yet Moore’s program is revolutionary by Southern Indiana standards. Instead of producing bright, shiny objects for the adoration of a demographic just like his, Moore seeks to use economic development funds for the purpose of developing PEOPLE — economically.

As Bluegill observed: “Investing TIF dollars in people. What a concept.” For the newspaper’s positive assessment of Moore’s vision, go here: Promise will improve lives and workforce.

Meanwhile, New Albany mayor Jeff Gahan busily touted a redevelopment department expenditure to fund an Indianapolis law firm’s (and frequent campaign donor’s) participation in another recreational project — in essence, hundreds of thousands of dollars to build a two-mile path straight out of the city, all the while refusing to discuss the utility of connecting this next greatest panacea to the existing Greenway.

Last week’s ON THE AVENUES column has the story: “That’s why I voted no,” explains Scott Stewart, pausing to duck rocks feebly lobbed by Team Gahan’s propaganda pygmies.

In which Scott Stewart starts thinking publicly and is immediately singled out and ostracized. For those of you still insisting on silly party-based scorekeeping, that’s two days in a row that a Southern Indiana Republican has made New Albany Mayor Gahan and mostly Democratic minions look like the mouth-breathers they are.

How very true … and how very, very sad.