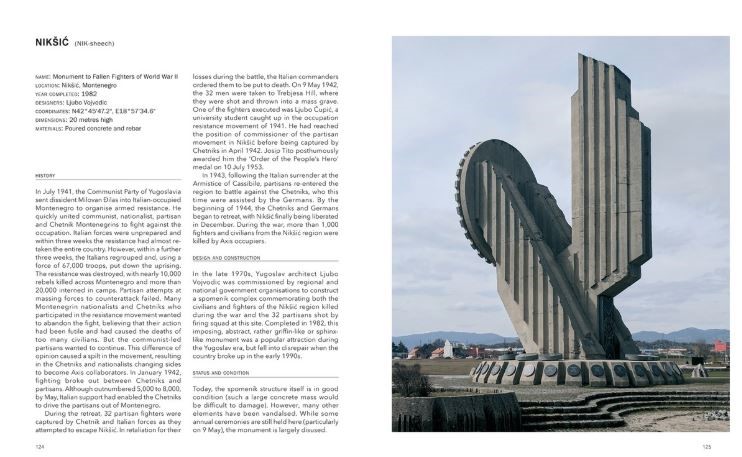 This minor obsession began with a photograph I took very long ago at a rest stop during a bus trip from Dubrovnik to Belgrade, in what then was called Yugoslavia  …

… followed by the helpful intervention of the internet 30 years later, enabling a positive ID.

The two fractal walls of the memorial were erected in the 1970’s to remember Operation Fall Schwarz, otherwise known as the Battle of the Sutjeska. The military action took place during World War II and saw Axis forces attempt to rout a group of Yugoslavian forces and capture their leader.

If you’re the Twitter type, the author of a new book about these memorials maintains an informative presence: Spomenik Database.

The Spomenik Database is an educational resource intended to catalog and demystify the abstract WWII monuments (spomeniks) of the former-Yugoslavia.

As for the book itself, this holiday season it would make the perfect gift for your favorite beer-slinging fan of brutalist monuments.

Spomenik – the Serbo-Croat/Slovenian word for monument – refers to the pioneering abstract memorials built in Josip Tito’s Yugoslavia between the 1960s and the 1990s, marking the horror of occupation by Axis forces and the triumph of their defeat during World War II. Through these imaginative creations, a forward–looking socialist society, free of ethnic tensions, was envisaged.

This publication brings together more than 80 examples of these stunning brutalist monuments. Each has been extensively photographed and researched by the author to make this book the most comprehensive survey available of this obscure and fascinating architectural phenomenon. A fold-out map on the reverse of the dust jacket shows the exact location of each spomenik using GPS coordinates.