A weekly column by Roger A. Baylor … with assistance by the Green, Green Mouse from home.

New Albany’s suburban-minded, self-congratulatory ruling caste is moving with characteristic pre-election haste to make the city safe for all the people just like them.

Wile E Gahan(Genius) is shining yet another spotlight on the shoddy chipped veneer of his own ego, joining with our culturally illiterate elites to merrily filch someone else’s idea about recreational rails-to-trails, surreptitiously scratching off the serial numbers, and heading down to the Quality of Life Pawn Shop for the cash to pay approximately 3% of a long-term project located almost entirely outside city limits.

Bait, meet switch. Neither a pathway to Bedford nor a series of triumphant press releases will help New Albany residents find alternative routes to work, obtain affordable housing, or keep their porches safe from petty thievery.

But look at us!

Operators are standing by to take your campaign donation, so call BR549 today!

Of course, we’re nodding wearily. It’s just another gold-painted brick in the putrid swamp of Mayor Gahan’s burgeoning cult of personality, this all-seeing, all-knowing Great Father of the New Albanians, who recently joined the festive crowds under our municipal Christmas Tree and humbly accepted their beseeching to belt out the Official Anchor Theme. 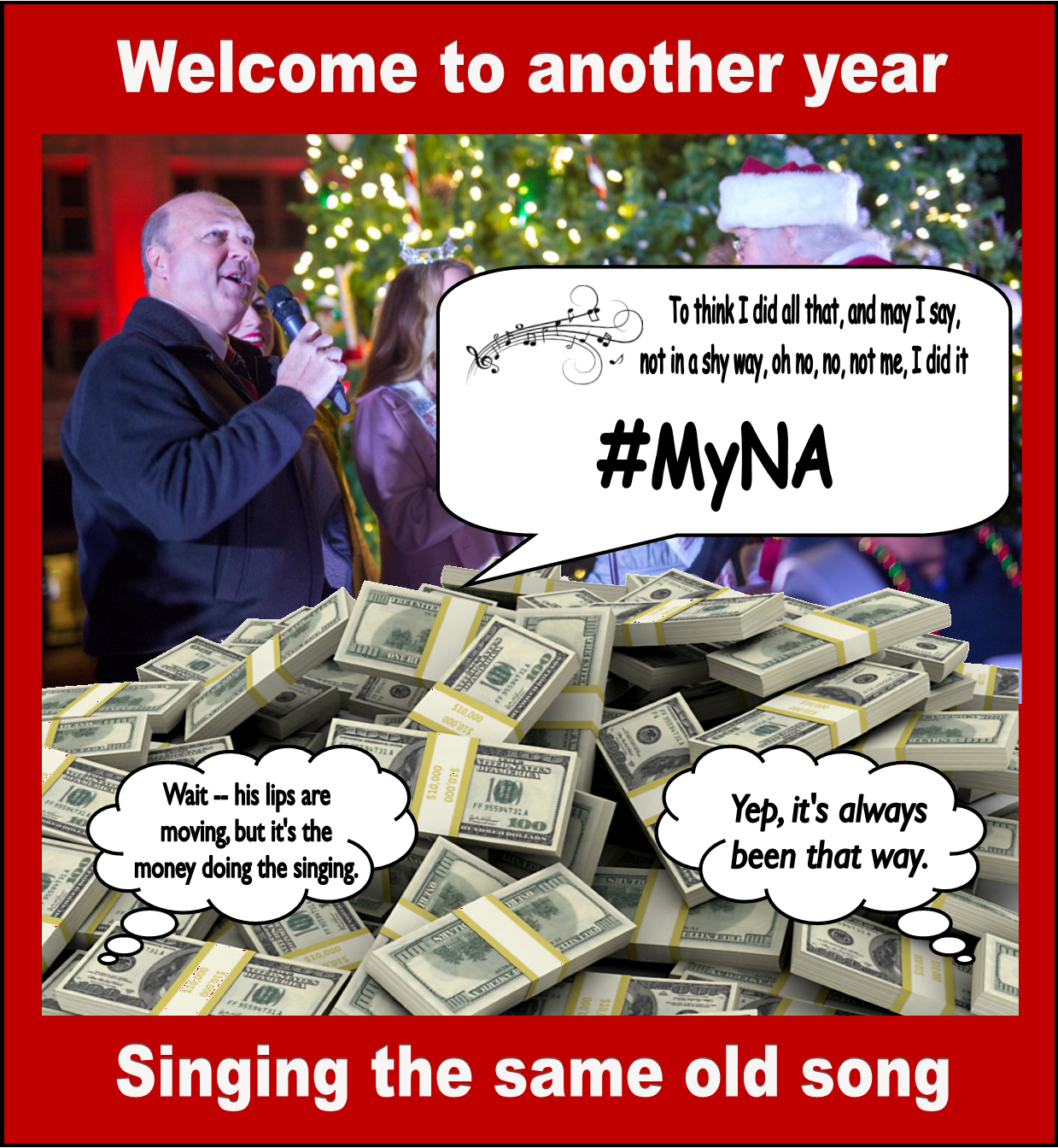 At least it explains why the animals were howling in terminal distress that particular evening.

Are the scalpels ready?

Let’s get down to the necessary dissection, beginning with this banner on social media, courtesy of the City of New Albany’s propaganda commissariat.

At today’s Redevelopment Commission meeting, the board approved a motion for Faegre Baker Daniels (FBD) to assist with advancing the Rails to Trails project. The vote was 4-1, with the lone dissenter being Scott Stewart.

(As an aside, Faegre Baker and Daniels are not newcomers to our civic circus: Me thinks Coffey knows Gahan’s public housing attorneys. After all, he tossed them from Redevelopment’s temple just last year.)

Thinking human beings should note an obvious item of importance from the preceding.

Why didn’t Jeff Gahan’s staffer phrase the missive to credit the city’s own loyal bootlickers, rather than imply Scott Stewart somehow is a vile creature for exercising due diligence about this latest pie in the sky?

At today’s Redevelopment Commission meeting, the board approved a motion for Faegre Baker Daniels (FBD) to assist with advancing the Rails to Trails project. The vote was 4-1, with Terry Middleton, David Barksdale, Adam Dickey and Irving Joshua voting in favor.

This is the city’s official “feed,” as it were, and it isn’t the place to pursue political vendettas — which is exactly what this is.

Isn’t shaming the Republican Stewart the sort of thing for the Floyd County Democratic Party’s disinformation outlets, as opposed to the city’s? Party chairman Dickey’s already doing it regularly for the Democrats, isn’t he — even if it didn’t avert a third consecutive electoral meltdown earlier this month?

Surely it’s a coincidence that Dickey enjoys a lifetime sinecure at the Redevelopment Commission.

I’ve only recently gotten to know Stewart, but his Curriculum Vitae is a matter of public record. He worked in communications for Proctor & Gamble Co., including stints overseas. He worked for Governor Mitch Daniels as senior policy director, and as head of the Port of Indiana.

In short, Stewart has considerably more employment and life experience at far higher levels of The Game than the combined weight of a motley crew of yes-men and sycophants gathered together by Team Gahan to stifle grassroots creativity, ladle political patronage, and make grammar school insinuations about Stewart in their self-serving press releases.

So, Stewart is a dissenter?

Awesome. Can we have more dissent like this, please?

I’m proud to stand with Stewart, whether he’s a Republican, a Kentuckian, a Klingon, or just an reasonably intelligent human capable of looking past the perennial bilge to dispassionately vet a proposed expenditure at the Redevelopment Commission, this being exactly why he was appointed by city council president Al Knable in the first place.

Consequently, seeing as the Redevelopment Commission likes to keep its usual pair of deuces concealed, I did the unthinkable. Let’s hope the News & Submitted Press Releases is paying attention, because I actually asked Scott Stewart to explain his dissenting vote.

Thank you for your inquiry about the Redevelopment Commission’s action today on a $125,000 consulting agreement pertaining to the proposed trail between New Albany and Bedford.

As a commission member, my initial thought when this proposal was first presented on November 13 was that the concept of converting an unused rail line to a multi-use trail was worth considering.

There is no greater foundational need for bettering our community than a laser-like focus on improving what economic developers call quality of place. For New Albany, such an effort, in my view, would require a comprehensive plan and targeted investment linking our neighborhoods and commercial areas with one another, including downtown and the Greenway, as well as with Indiana University Southeast and the Purdue Technology Center.

As I’ve discussed the trail idea with others over the past few weeks, I’ve come to the conclusion that I cannot support using our limited Redevelopment resources to speculate on a trail to Bedford without first making substantial progress in providing safe pathways for pedestrians and cyclists within the city limits. There have been fatalities among pedestrians and cyclists given the failure to effectively address this critical need. Improving quality of place requires making walking, running and biking as safe as possible. Safety and economic development should go hand in hand, and they start right here at home, not on the way to Bedford.

There are many factors relating to the proposed trail to Bedford that are unknown or speculative. Such a project will be complicated and very expensive. The commission was asked to sign the first of what may become a large number of checks for this project. Given the many needs and opportunities within the city, committing to a project that would cost millions outside the city doesn’t make sense. In other words, there are important needs within the New Albany city limits that will remain unmet if this project moves forward.

That’s why I voted no.

They won’t, so allow me to fully agree with Stewart, and add that while perfectly valid in the abstract sense, the rails-to-trails we need most in New Albany would begin at the Greenway, to run along the urban section of the CSX tracks all the way past the currently specified beginning point near Sazerac for another two miles north, to the city limits.

There it would stop, to await action by surrounding governmental units to complete their segments eventually leading to Bedford, Bloomington, Keokuk or Duluth.

First things first, and people in New Albany first — unless you’re a mayor enamored of smoke, mirrors and low-hanging fruit, because what the current rails-to-trails proposal really signifies is the accumulated pain of the city’s TIF One Credit Cards screaming “tilt”; we can’t afford the necessary urban route, the one resembling the Monon Trail in Broad Ripple, so we’ll settle for the first two detached and isolated miles of a yellow brick road to Needmore.

What does this paltry two-mile stretch have to do with New Albany, apart from one man’s engorged megalomania?

In closing, several alert readers who’ve rigorously trained themselves to look past faux journalism and simple stenography, straight to the heart of the matter, have asked precisely the right question.

How much money has Faegre Baker Daniels donated to Jeff Gahan’s re-election fund?

Here’s the answer … so far, and not including and cash-stuffed envelopes adorning the monthly fruit basket. You’d think he’d at least give the untouched fruit to a homeless person.

Some will find nothing particularly odious or even noteworthy about a mayor’s campaign accepting donations just like these from vendors, consultants and contractors just like them.

But you can’t convince me it isn’t pay to play. Read Stewart’s explanation again. It’s damned ethical, isn’t it?

November 22: ON THE AVENUES: A few thanks to give before we return to our regular anti-anchor resistance programming.

November 15: ON THE AVENUES: Notes on Solidarity after a visit to the European Solidarity Centre in Gdansk.

November 1: ON THE AVENUES: Three books by Polish writers.