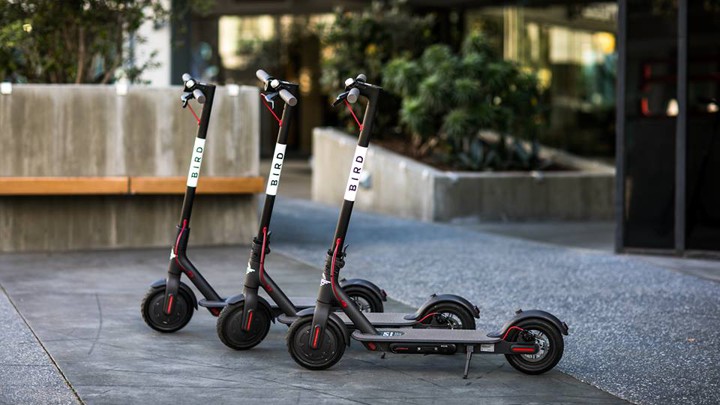 It’s difficult to fathom the change.

In 2015, New Albany’s Board of Works and Public Safety famously dithered for months about a harmless street piano.

Now, seemingly at the casual drop of a chapeau, BOW’s gatekeeper Warren Nash is striking a youthful pose with regard to Bird e-scooters.

“It’s (an up-and-coming) thing, and it’s working in other places.”

Ugh. Can a hipster beard be far behind?

Before we risk life and limb atop one of the Bird e-scooters to be turned loose to navigate New Albany’s streets of screams, let’s define the term.

We tried it: How the new Bird scooters work and what you need to know, by Kirby Adams (Louisville Courier Journal)

Like a flock of starlings suddenly swooping into a city park, a pack of Bird electric scooters are landing in Louisville and a lot of curious Louisvllians want to know how to hop a ride.

So, we took a ride on a Bird scooter (when they prematurely arrived a few weeks ago!) to give you the ins and outs on what to expect.

Here’s how it works

First and foremost, riders must have a valid drivers license and be 18 or older to use a Bird.

When Courier Journal Executive Editor Joel Christopher and I decided to take a couple of Birds to lunch, the first order of business was to download the Bird app on our smartphones and locate where two scooters were parked.

See the interesting thing about Bird scooters is they’re not parked in any particular spot, like the bike sharing racks that dot Louisville’s downtown. (In case you didn’t know, Louisville’s bicycle sharing program, LouVelo, has been in operation since May 2017 and has more than 25 docking stations or kiosks around the city.)

Instead, with Bird, you cruise the app to ping a scooter’s location.

We got lucky and found a couple just a few blocks from the Courier Journal on Fourth Street near the Louisville Palace, 625 S. 4th St.

There are certain parallels between the advent of e-scooters and ride sharing. One thing to bear in mind is the existence of more than one e-scooter supplier seeking a piece of the action. Because cities have since learned the rules of the game, regulators are involving themselves with the laborious task of picking winners.

The bare-knuckle tactics Uber used to get its way with regulators are not going to work for scooter startups, by Johana Bhuiyan (Recode)

Cities have the upper hand this time.

… Cities are also not instating an outright ban on scooters — regulators are simply being selective about which companies will operate those scooters. And governments, like Santa Monica’s, are using their power to demand compliance, collaboration and a commitment to equitable access to transportation — not just in their cities, but everywhere.

Having watched Uber and Airbnb grow around the world, these lawmakers are under no illusions that a noncompliant company in one city will magically be compliant in theirs. Santa Monica’s scooter permit process, for example, included a scorecard, where companies were judged on how well they comply with local, federal and other laws.

Bird scored among the lowest.

We all know what this means. What do you do to improve your performance? Hire a lobbyist, of course.

Sam Reed has left The Ingram Group to lead a new government relations team for his former client, Bird.

Accordingly, we already know the likely next step in this process; insert Gahan re-election fund donation here, because it’s almost certain to appear on the mayor’s 2018 books.

I’ll let you know when this can be verified, but I’m supremely confident it will.

Apart from the near certain donation, the Bird scooter discussion is surfacing at this moment because of several considerations unrelated to tender concern toward the commonweal.

For one thing, I’m not the only critic of the city’s street grid neglect. Officials have been thin-skinned about those pointing to their lack of resolve to make the city safer. I think publicly dabbling with scooters sends a message to the doubters, and also hoists a tepid middle finger: “See, the city is so very safe we can allow scooters to dart through it with no worries.”

There’s also an election coming, and local Democrats want desperately to believe in the possibility of a “blue wave.” Mention of e-scooters is code language directed toward a handful of purported progressives, implying that in spite of the dull sluggishness of the city’s and party’s pay-to-play patronage machine, bureaucratic local Democrats are achingly hip to modernity.

The article below duly notes an ongoing examination of liability being conducted by the city’s corporate attorney, which is likely to translate into draconian restrictions on usage even if the requisite donations are made, and the city actually approves e-scooter use.

Here’s the part that should give you pause.

E-scooters are required to ride in the bike lanes or close to the right curb. New Albany officials say the city has sufficient bike lanes to accommodate the scooters.

How much Bud Light Lime has to pass down one’s gullet before our bike lanes are sufficient for bikes, much less e-scooters?

Recalling that Spring Street already is the nexus of justifiable complaints about City Hall’s unwillingness to protect all users of the street grid, it’s also the only downtown street with bicycle lanes — in spite of Jeff Speck’s recommendation that we include them everywhere.

One can readily imagine Nash and Gahan, beaming happily as e-scooters travel up one side of Spring Street and down the other, pausing only to be obliterated by speeding drivers whenever they try to cross to the other side.

Will attorney Gibson also be researching what’s likely to happen if a Bird inadvertently wanders into one of New Albany’s signature non-functional sharrows?

Officials in New Albany are trying to determine whether they should make a push to bring e-scooters to southern Indiana.

… Louisville Public Works announced Monday new rules for riders, including where they can’t ride. Waterfront Park is off limits.

Across the river, officials in New Albany are keeping a close eye on what’s happening. They’re trying to determine whether they should make a push to bring e-scooters to southern Indiana.

The president of the New Albany Board of Public Works, Warren Nash, said he supports the movement, and the city has reached out to Bird. The city attorney is doing research on what happens if something goes wrong.