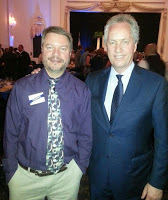 Before stealing a glance at the exclusion of independent candidates from the final Louisville mayoral debate, I’m turning to Jeff Gillenwater to articulate the crux of it.

I’ve spent decades now watching more thoughtful, compassionate people attempt to run for office under the Democratic banner in local, state, and national races. Over and over and over quite consistently, party officials at all levels have intervened, using the full force of their financial and political clout to defeat those candidates, to weaken those voices, and to make sure that their discourse and concerns, no matter how well documented and supported by evidence, do not become the center of policy debate, do not become a legitimate choice that voters can make. The idea that the Democratic Party in this country is an eager and effective agent or vehicle of significant social change simply isn’t true. When you donate to the party, you’re supporting the silencing and defeat of more thoughtful, compassionate voices. There’s no way around that so, if you’re going to do it, you need to own it and call it what it is.

It needed to be said. Now, let’s look at yet another way media reinforces the two-party duopoly.

Independent mayoral candidates Jackie Green and Chris Thieneman say they were surprised and disappointed to learn last week that they will not be allowed to participate in the final televised mayoral debate next week, as only Mayor Greg Fischer and Councilwoman Angela Leet have been invited to participate in the live broadcast.

Pat Murrell, the president of the League of Women Voters of Louisville, told Insider Louisville last week that while all nine candidates for mayor were invited to its candidate forum to be broadcast on WAVE3-TV on Oct. 16, organizers recently decided to split the forum into two: one aired live on television and WFPL at 7 p.m., with the second one at 8:15 p.m., which will only be livestreamed on wave3.com and archived online on wave3.com and wfpl.org.