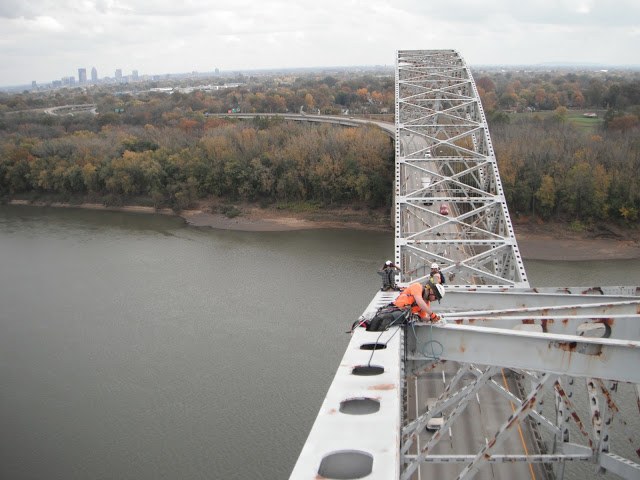 There’s a municipal election coming in 2019, and the projected date for a months-long bridge closure in 2021.

If the toll-free bridge closure is inevitable, we might as well kick back and ask this important question, joyfully or otherwise: shouldn’t there be a level of local preparation, and shouldn’t this be a prime campaign topic during next year’s local races?

I think it should be one of the major questions. It might be a jumping-off point for a far-reaching public discussion about transportation alternatives, and … well, that’s not going to happen, is it?

The increase, from $80 million to $92 million, reflects added work on the Indiana side of the Ohio River.

LOUISVILLE, Ky. – The price tag for a massive overhaul of the Sherman Minton Bridge has climbed since the project was announced nearly a year ago, a result of more work slated for the Interstate 64 corridor …

In interviews last fall, Indiana officials said they anticipated a planned construction start in 2021. But (Harry) Maginity indicated this week that a timeline for the project won’t be known until after the state moves into the bidding process – although it’s not known when that will happen.

Indiana plans a “best value” approach that will award the Sherman Minton contract based not only on price, but also on a construction plan that tries to limit road closures. The states used a similar strategy when replacing the Milton-Madison Bridge, awarding the contract to a company that proposed a 10-day shutdown; other bidders sought months-long closures.

Transportation officials suggested last year that the Sherman Minton could be shut down for more than seven months during the work.

“The idea of best value is to get the best deal for the motoring public,” Maginity said. “It’s a major inconvenience, obviously. But we’re going to try to minimize that the best we can.”