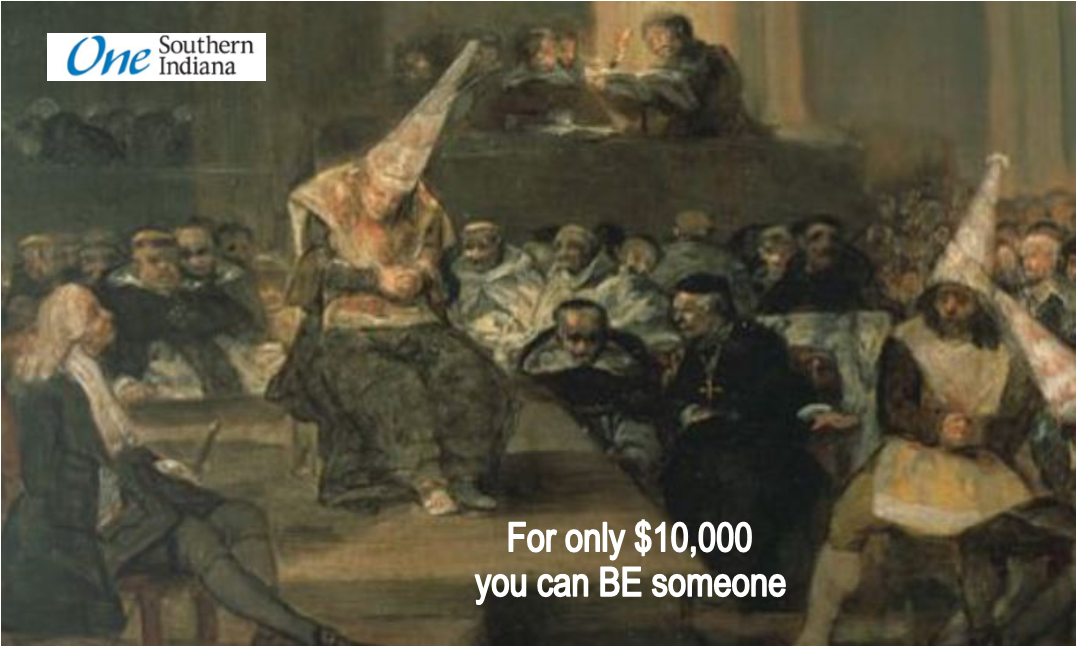 It turns out I wasn’t the only observer who found it a bit strange that the Tom May Compendium’s city council coverage yesterday trumpeted the purely peripheral: “New Albany gets two seats on 1Si’s Economic Development Council with donation,” but then again, perhaps terminal decline has a way of disorienting headlines and content.

First a brief detour, because recently arrived readers might be confused, so here’s a reminder of why I’m referring to the local chain newspaper in this way.

“News and Tribune” changes its name to “Tom May Compendium.”

First the newspaper doubled down on its weekly Sunday coverage of religious superstition with two columnists, one local (Tom May) and the other not (Nancy Kennedy).

Now May gets a second column slot (albeit it one not published weekly) at a time when the newspaper surely would be better served by a newfound commitment to diversity.

Apparently the free-lancer May used to be the ad-driven publisher Hanson’s minister, or best friend, or some such example of crony journalism. It’s the sort of fertilizer guaranteed to produce a bumper crop of satire, so now I’m a farmer — and I’m digging, digging, digging.

Back to those two awesome donation bonuses.

One Southern Indiana visits city council, sells $30,000 of pencils, and flies back to Abuja.

In Morris’s story for the Tom May Cornucopia, only a slim paragraph is devoted to these seats on 1Si’s mysterious star chamber. Fortunately, Mark Cassidy attended Thursday’s meeting and he explains what the newspaper neglected to add.

Mark begins by referencing my larger point that our regional economic development (read: oligarch enrichment) organization tends toward breathless exaggeration when claiming ripple-effect prowess; perhaps not in accuracy of the raw statistics they quote, but assuredly as it pertains to their role in producing them.

I asked the council how I could obtain the materials 1SI presented to the council as proof of their worth. Vicki Glotzbach (city clerk) offered to make me a copy that night, and Dan Coffey offered his to me on the spot. Thanks to both of them. I will be reading it closely. Not that it will make any difference.

Indeed. This particular barn-less horse was last seen galloping in the direction of River Ridge. Regardless, I’m looking forward to Mark’s report. He then gets to the “two seats” sequence. I’ve highlighted one critical point.

Bob Caesar asked the only question. He wanted to know why the money we gave them last year was for a specific project, but this year it is more of a general contribution. Actually it’s an excellent question. Scott Blair rambled on about this and that, and then came what I think was the real answer: For a $30k donation of this type, the city will get two seats on the 1SI high muckety-muck Economic Development Council. One is appointed by the Mayor and one by Council.

This is a board that gets to hear things first. Anyone think Scott wants a seat?

And, yes, the only way to get a seat on this prestigious board is by contributing a minimum of $10,000. Qualifications such as education and/or experience be damned. A fat wallet is all it takes.

Perhaps the Tom May Anthology’s headline should have read like this.