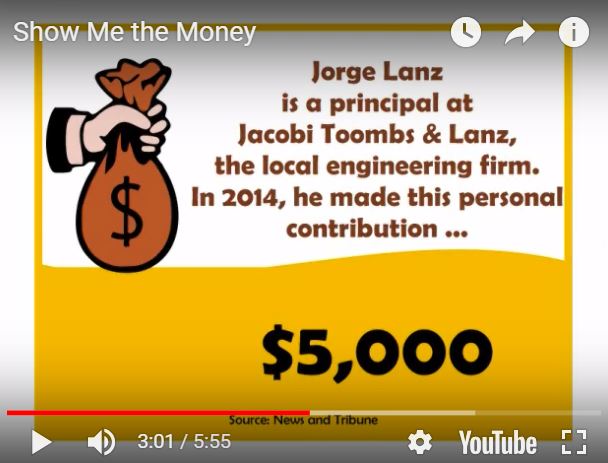 Surprisingly, Rahm Emanuel isn’t running for another term as mayor of Chicago — but he needn’t leave his campaign war chest behind.

(Emanuel) also has deep pockets: For his mayoral bid, he raised five times the amount ten of his rivals raised together. For all of these reasons, some on Twitter speculated today that he might be eyeing the 2020 presidential race after he relinquishes his mayoral duties. Whether or not that turns out to be true, he is not likely to disappear into the background.

“Obviously the guy’s got $10 million dollars in his campaign war chest, so he’s going to be a player moving forward,” said Ron Holmes, a political strategist in Chicago with ten years of experience in Illinois politics.

Conversely, using Mayor Jeff Gahan’s CFA-4 filing in January as a point of reference, Gahan came into 2018 with roughly $87,000 in future campaign funds. Divided by New Albany’s population of 38,000, this equals $2.29 for each man, woman and child in the city.

In a city where 25% of residents exist below the poverty line, Gahan’s campaign finance documents routinely feature donations in $1,000 to $5,000 increments from firms and individuals benefiting from city contracts. I’ve displayed many of them in this space.

Obviously, these donations represent what has been calculated by donor and recipient as justifiable for those gifts being reported. As adults, we all know that these donations probably are the tip of an iceberg.

No polemics, no rhetoric, just this: Emanuel or Gahan; same problem about big money in politics, just a different municipal scale. Rahm’s not running. Jeff almost certainly will. Next year when our mayor lofts those nice depictions of bright shiny objects to solicit your vote, two questions should come to mind: how much did these wonders actually cost us, and how much did the engineers and contractors donate to Gahan as a token of their esteem?

I’d ask only that you consider these points before voting. Is this really the way you want local government to work?

It’s well known that a run for a big office needs big money backing it, but up and down the ballot, budgets have been swelling, and not only in the U.S.’s largest cities. Several localities—including Portland, Denver, and Baltimore—have initiatives in motion to overhaul the system either by driving down the dollar amounts each person can give or solicit, piloting public financing projects that make each donated dollar go further, or both. The overarching goal is to keep big money and its influence out of local politics, and to give all candidates a fair shot.