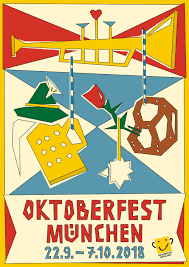 Like most of the world’s beer styles, the tasty delight we refer to as Oktoberfest comes to us as a product of evolution within the context of tradition.

See also: The seasonality of Oktoberfest in time, beer and year.

This beer began as a dark lager brewed in spring, and held until harvest festival season in autumn. It changed in step with advancements in malting technique and shifting popular tastes, lightening from dark brown to orange/amber, and nowadays to tawny golden, though with the basic full, malty flavor balance remaining consistent throughout.

Everyone knows that Munich’s Oktoberfest is the most famous such celebration, a two-week paean to sheer excess as calculated to explode heads with numerical overkill via the total of liter beers drained and roasted chickens consumed, not to mention whole oxen on a spit. It begins this year on September 22.

At Pints&union, we decided to get a head start on “official” Oktoberfest by tapping Hacker-Pschorr Original Oktoberfest. More about that in a moment.

Beer writer K. Florian Klemp is one of the best we have when it comes to explaining beer styles. His MÄRZEN/OKTOBERFEST lesson is at All About Beer. First came Märzen (in German, the month of March), the forerunner of Oktoberfest, and Vienna is a kissing cousin of both.

The first Oktoberfest was a communal celebration of the marriage of Crown Prince Ludwig (later King Ludwig I) of Bavaria and Princess Therese von Sachsen-Hildburghausen. It was held just outside Munich and attended by both royalty and citizens. The epic event started on Oct. 12, 1810, and lasted five days. The festival grounds were named Theresienwiese, or Therese’s Meadow.

The festival became an annual event, a celebration of autumn, harvest and agriculture. The timing was perfect for tapping that year’s locally brewed Märzen—still a dark beer, suitably aged and in prime condition for fall consumption.

By the 1870s, Josef Sedlmayr, Gabriel II’s brother and brewer at Franziskaner (today part of Spaten), was keen to the changing landscape, noting that lighter beers were becoming quite popular. The Sedlmayrs were among the most prominent brewers in Munich, and the penchant for tinkering was apparently an inherited trait. Josef got busy working on a Vienna-style lagerbier, finally hitting his mark and rigorous standards in 1871. He brewed it the following March and introduced it in 1872.

It was poured in the Schottenhamel Banquet Tent by Michael Schottenhamel, a carpenter from the Palatinate who erected a small barn on the Theresienwiese in 1867. Called Franziskaner-Leistbrauerei Ur-Märzen (original Märzen), it was pricey, but sold like crazy. The newly stylized beer was hastily copied by other Oktoberfest brewers and soon enough became the event’s signature brew.

With the development of refrigeration about the same time by Karl Von Linde in Germany, brewers were able to make beer year round, rendering the literal, traditional definition of Märzen moot, but useful as a simple stylistic designation. Märzen became identified with amber lagerbier because of the festival, and by default, both it and Oktoberfestbier became synonymous.

I’d like to say that Hacker-Pschorr Original Oktoberfest will pour through the month of September, but of course this depends on the wholesaler’s inventory — and the lesson I’ve learned the fastest since undertaking the construction of the Pints&union beer program is not to depend on what wholesalers tell you about their inventory.

My aim is to keep an Oktoberfest beer of one or another variety on tap into October. Klemp summarizes Hacker-Pschorr Original Oktoberfest in this addendum to his article, and I think he nails it.

Tasting Notes: The Hacker-Pschorr brewery was founded in Munich in 1417, making it one of the longest-standing operations in the world. Its Oktoberfest-Märzen is one of six brews poured at Oktoberfest. Full reddish-amber in color, it offers up floral noble hop and warming malt aromatics. Some extra sweetish malt flavor is backed up by a firm dose of bittering hops. Complex maltiness, with both lighter grainy notes as well as a good dose of darker varieties. Nicely balanced, with a bit more hop character than some of the others. The finish is somewhat light and dry.