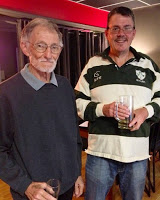 Terry Cummins was an assistant principal at Floyd Central when I was a student.  I got to know him all over again as an adult during the 1990s via the helpful medium of the Public House.

Since then, one thing I’ve tried not to miss in the newspaper is his weekly column. In 2015, Terry wrote wonderfully about his wife’s terminal illness and his own cancer diagnosis.

Vera died in early 2016, and several months later, Terry wrote one of his finest newspaper essays, bar none.

She’s been gone for seven months. It seems like forever, but I feel her presence that will not leave. Vera and I were married for over 61 years, which were packed full of all kinds of surprises, heartaches and emotions imaginable. When we chose to undergo frequent stubbornness contests, something had to give. An at-odds married couple can try discussing head-on conflicts, but it took several years for me learn to keep my mouth shut, and take her in my arms. If you do this, don’t ever whisper, “I think you were more stubborn this time than I was.” No, tightly squeeze her until her lips begin searching for yours. Then lead her to the bedroom no matter what time of day it is. It’s wondrous what love can do by what you do rather than trying to explain everything.

Terry bounced back from these reversals and beat cancer, only to face the same enemy for another round.

May 19, 2018: Newspaper columnist Terry Cummins and his thoughts about finality.

His most recent update came Saturday. If you’ve read Terry’s writing, it makes perfect sense that he’d be chronicling his life as it is, right now — without a trace of annoyance or self-pity, just the matter-of-fact perspective of a country boy who has retained bedrock values and an accompanying spiritual serenity.

Best wishes to Terry. What an inspiration he’s been to all of us!

CUMMINS: Finishing with a flourish, by Terry Cummins

There’s no way to get around it. If you’re alive, you’re going to die. But I’m not ready yet. That’s too bad. If you’re up in years or your body is aging faster than it should, time is not on your side. Have you ever observed a beautiful flower keep its radiance indefinitely? Unless it’s plastic, it withers and returns to the earth to be regenerated again in the natural scheme of all life on earth. Unless you’re plastic, you’ll wither to dust and regenerate into eternal life, if you have faith and trust there is a Creator, an enduring, stable and abiding force.

But who wants to live a plastic, or artificial life? After fighting cancer for over three years, I’m weary of it. And after conquering colon cancer, which was like a long vicious dog fight, the remaining dormant cancer cells went to my bones and began thriving there. And now it’s another all-out battle to determine if my bones take me down deep or the poisons they inject inside me provide a bit more life of dubious quality. It gives one something else to agonize about — day and night …

How and when will I pass on, and is there a way to prepare for it?