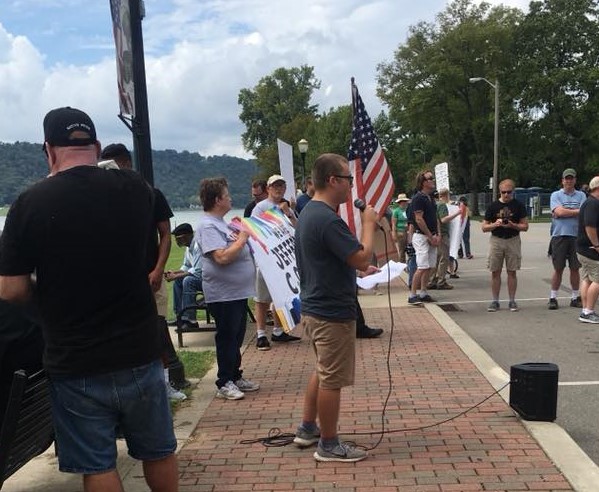 Nick Vaughn was on hand yesterday to join protesters at the Ku Klux Kooks gathering in Madison, Indiana.

I think “kooks out” works better, but sadly, spelling deficiencies aren’t confined to white supremacists. Vaughn had this to say about it at his Facebook campaign page.

Was proud and honored to speak against the hateful KKK today in Madison, IN. They have no place in Madison, New Albany, or anywhere else in this world.

Any other local Republicans care to weigh in?

Meanwhile, since Friday it has been made safe to refer overtly to Vaughn’s prospective campaign, because this was the day he formed a formal “exploratory” committee.

Finally, we are able to announce a few members of Nick Vaughn for New Albany:

The requisite Indiana form asks the filer to explain why he or or she is forming the committee, and Vaughn answered with “feasibility of a citywide campaign.” The Green Mouse is hazarding a guess that it’s not a campaign for city clerk, but beyond this, we know little.

GREEN MOUSE SAYS: What does it mean, this social media surge by Nick Vaughn?

Vaughn also has established a PayPal site for donations.

Now, for the local chain newspaper’s coverage of the Kooks Up in Madison.

KKK event draws hundreds of protesters to Southern Indiana, by Erin Walden (A Cornucopia of Tom May Content)

MADISON — Hundreds of protesters descended upon Jaycee Park on Saturday afternoon, drawn together by their common objection to one thing: a cookout put together by the Ku Klux Klan.

This is the third year there’s been a “Ku Klux Kookout” in the small tourist city of Madison, nestled along the Ohio River in Southern Indiana, and the third time it’s drawn protests.

The Klansmen, some of whom had their faces covered with bandanas and handkerchiefs, gathered in a shelter house atop a small hill in the park. The group was comprised of fewer than 20 people, mainly men, who waved the American, Confederate and Nazi flags.

A chain link fence and police from three agencies — Indiana State Police, Jefferson County Sheriff’s Department and Madison Police Department — along with barricades separated the Klansmen from hundreds of protesters.

“We are not a hate group,” Derek Eaglin, the leader of the KKK group, told the crowd. “We are not anti-black, we are pro-white.”

Their rhetoric seemed to contradict that sentiment. The group often shouted slurs at the protesters and argued that “diversity” and “minorities” are the cause for drugs in their community …

… Another half of the protesters took a different approach. The Southern Indiana Fairness Alliance, Jefferson County United and Kaleidoscope, Hanover College’s diversity club, came together to organize counter measures against the “kookout,” according to Evan Stoner, a Jeffersonville native. The three groups lined up public speakers to send a different message to the KKK …