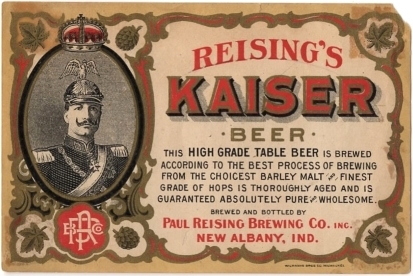 Recently I indulged a digression about Falls City in both old and new incarnations, and my friend Scott pointed to something that may be worth a second look.

My question is, are any of the retro beers actually the exact same recipes as when we were teens or has our tastes changed as we have aged? City, Pabst, Sterling were undrinkable to me then. Just nasty like Miller Lite still is today. Stroh’s was okay. That was my beer for a few years before I went up to Miller High Life.

Following is my answer, right or wrong, without having done the slightest research on the matter.

To me, it’s just common beer sense that many, if not all, of the contemporary “retro” beer brands have little in common with their foundational predecessors.

By “retro” beer, we’re pinpointing those brands available regionally (some were national brands) prior to the craft beer era, ones that ceased to exist for a time and since have been revived, almost always as brewed at a location other than their original brewery site.

Obviously, the beer portfolios of BudMillerCoors cannot be considered “retro” according to this definition, as they’ve continued in production since the end of Prohibition, and throughout the modern era. Granted, their multiple brewing locations muddy the waters, but not too much. The point is their continuity.

Conversely, a panoply of beers — dozens nowadays, including Stroh’s, Schlitz, Hamm’s, Narragansett, Sterling, Champagne Velvet, and yes, even Falls City — were born at a particular brewery, enjoyed long life spans and generated iconic branding that remains familiar, but they’ve long since ceased being brewed “at home,” so to speak. They disappeared from sight, if not always in totality, and have been brought back to leverage the adjective “iconic” in terms of marketing, not to rediscover the original recipe.

Any way you look at it, there’s almost no way these recipes could taste the same, even if they are the same on paper.

For one, even the Budweiser purportedly brewed in St. Louis according the the same formulation as used 125 years ago isn’t the same now as then, because the barley and hops have evolved over this span of time. The same goes for everything we as humans consume. Does chicken today taste like it did in Mark Twain’s day? Selective breeding and hybridization suggest it’s highly unlikely.

There’s also a slightly more obtuse consideration, although I believe it to be merited. I’ve been rereading Michael Jackson’s Great Beers of Belgium, which the Beer Hunter published in 1992, with several updated editions appearing prior to his death in 2007.

Intentionally avoiding depth of detail in the interest of an overview, and acknowledging the passage of time, Jackson notes that numerous factors enter into a beer’s flavor profile, including the obvious choices of malt and hops, but also water softness or hardness (nowadays adjustable through water treatment), as well as the chosen yeast, this being perhaps the least understood element on the part of beer drinkers who aren’t well versed about beer making.

In short, while much of modern brewing history centers on the application of science to make yeast behave predictably, they remain living creatures with habits and eccentricities of their own. Jackson observes that in traditional brewery settings like Belgium during the period of his visits — think of old industrial architecture and not the pristine operating theater of a modern hospital — yeasts would come to adapt to their variable surroundings.

The same basic yeast strain carried to a different brewery eventually would adjust to the new environment; given that we’re speaking of ales fermented at a higher temperature, these yeasts would contribute to the ultimate flavor profile of an individual beer, and if the same strain was used to brew more than one beer, there’d be a “house character” of sorts across the whole of the product line.

While it’s true that the art of lager brewing advanced across the planet as a way of standardizing brewing science and reducing these eventualities, it isn’t far-fetched to imagine that especially in the period prior to Prohibition, America’s lager beer makers benefited from a similar serendipity, their recipes and yeast-driven house character coming into being just like at the Belgian breweries surveyed by Jackson.

Whether or not “fire brewing” in the context of Stroh’s (direct flame on the kettle as opposed to jacketed heat) caused hot spots and added a little something caramelized to the finished beer, the brewery’s choice of yeast probably did. Fast-forwarding, one might take today’s Stroh’s or leave it, but neither the yeast nor the “fire” process is the same in the reconstituted brand.

At this precise moment, writing on a Sunday morning, I can distinctly recall what these beers mentioned by Scott tasted like when I was younger. He’s correct in saying that our ability to taste is altered as we age, but this does not compromise my memories.

These brands had a definable house character. There was a Stroh’s flavor, and a Sterling flavor, and a Budweiser flavor, and I always could pick them out. Some I liked, others not.

A few months back I drank a little 7-ounce bottle of Miller High Life, and it tasted largely the way I remember it from high school. However, the Stroh’s we’re carrying at Pints&union does not taste the way it did when I sat at the bar of Lanesville’s K&H Cafe in the mid-1980s with my friend Doc Holliday and drained the night away, at least until he retreated back up the hill to Maverick Mountain and I navigated the corn fields home to Georgetown.

Miller High Life may have been tweaked and adjusted, but there is a continuity in the way it is brewed. Stroh’s almost completely disappeared and was passed around from speculator to speculator. By the 1980s, the same was true of beers like Falls City and Sterling. They’d stopped being brewed at their “home” breweries, been reduced to bundles of discounted marketing imagery, and sold to whomever might squeeze a few more dollars from the bastardization before the older generation of loyalists died.

When these brands returned to liquid form and once again were real, tactile beverages capable of being discerned by human palates, and not merely the offspring of advertising wearables, there no longer existed any connection between what they had been and what they had become. Any seasoned contract brewer capable of rendering batches of competently rendered lager might now affix stylish old labels and roll out six new/old beers from the very same vat.

They’d be perfectly and professionally drinkable, just decidedly indistinct, and if tasted blind, it’s doubtful many of us could tell the difference.

Or, they might use 6-row barley malt, corn or rice, and make an honest effort to more accurately recapture the older formulations. Still, I suspect that once lost, the genuine and individualistic house character of these old imperial warhorses — those unique traits that made them taste the way they did before adulteration, debilitation and decline rendered them moot — is gone forever.

Hence the conundrum. A beer like today’s Falls City Classic Pilsner tastes nothing like the original ideal of its predecessor, but it tastes far better than its predecessor did during the death throes in the 1970s and 1980s. To me, the best example of this is Pabst Blue Ribbon. Today’s PBR, the delight of hipsters and throwbackers, doesn’t taste like PBR used to.

Rewind to 1980, and you’d find Pabst to be a forceful, float-a-penny-on-top, full-flavored concoction. You might not like the house character, but it could not be denied. It ran through all of Pabst’s beers at the time. These days, it cannot be discerned at all, and the overall viscosity of everyday PBR matches that of the 1980s-era light Pabst.

I’m not sure there is a conclusion to any of this apart from one’s own personal perspective and pocketbook.

The reason why Stroh’s, Old Style and Little Kings are available at Pints&union is that I drank them in days of youth. Only the latter tastes close to my memory of it, but they’re all quite drinkable, as is the Falls City Classic Pilsner on draft. I still prefer Pilsner Urquell.

And there you have it.