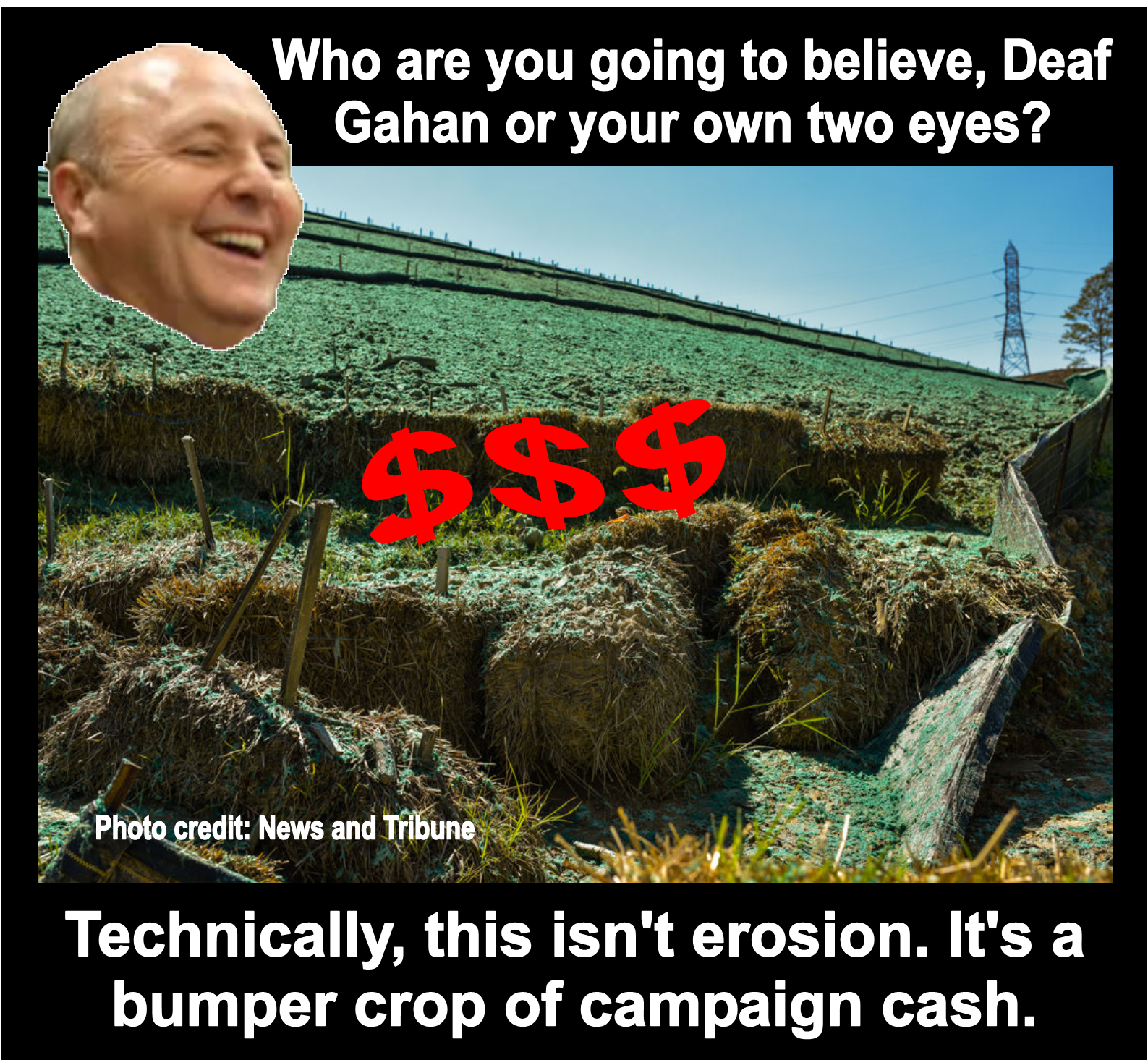 “I think a lot of people, when you start making those kinds of adjustments and changes to our landscape, I think people should be concerned. And we’re concerned.”
— technically, trademark gibberish from Jeff Gahan

He could never lie very convincingly, but as the untreated personality disorder advances, expect the vowel movements to increase in intensity.

Mayor: Despite water runoff, Summit Springs developers are in compliance, by Danielle Grady (Tom May Picayune)

NEW ALBANY — The video, posted to Facebook one month ago, showed a rush of brown water spilling over a wall and down the newly built Daisy Summit Road during a particularly bad storm.

Commenters were not surprised: “Figured that would happen,” said Missi Mathes-Wiseman.

Nearby residents see the video as proof that the Summit Springs development, under construction on a hill that towers next to State Street, isn’t a good idea. But the city, which approved erosion prevention and drainage plans for the project that met and, in some cases, exceed New Albany’s standards, says that’s not the case.

The Summit Springs hill is at risk of erosion and slope failures, according to a 2006 geotechnical report, which studied a previous iteration of the project. But the report also found that the hill should be fine as long as the developers, Summit Springs, LLC, follow certain recommendations.

New Albany Mayor Jeff Gahan assures that the developers are taking proper measures. Before Thursday, he hadn’t seen the Facebook video, which has since accumulated 17,000 views and 153 shares since being posted. But he did view a similar one filmed more recently, which showed a less extreme version of what happened a month ago. It was right to spark concern with the average viewer, he thought.

“But technically,” he said, “[The developers are] doing what they’re supposed to be doing, and I feel good about the development, and when it’s all said and done, I think people will be very proud of it.”

As the mayor fantasizes, catch up on the story via these links.

Let’s talk about the 8% and their affordable slots in the 14-story luxury middle finger high atop Summit Springs.

A 2016 reprise: “High atop Summit Springs with friends (and relatives) in low places.”

ON THE AVENUES: Taco Bell has as much to do with “local business” as Jeff Gahan does with “quality urban design principles.”