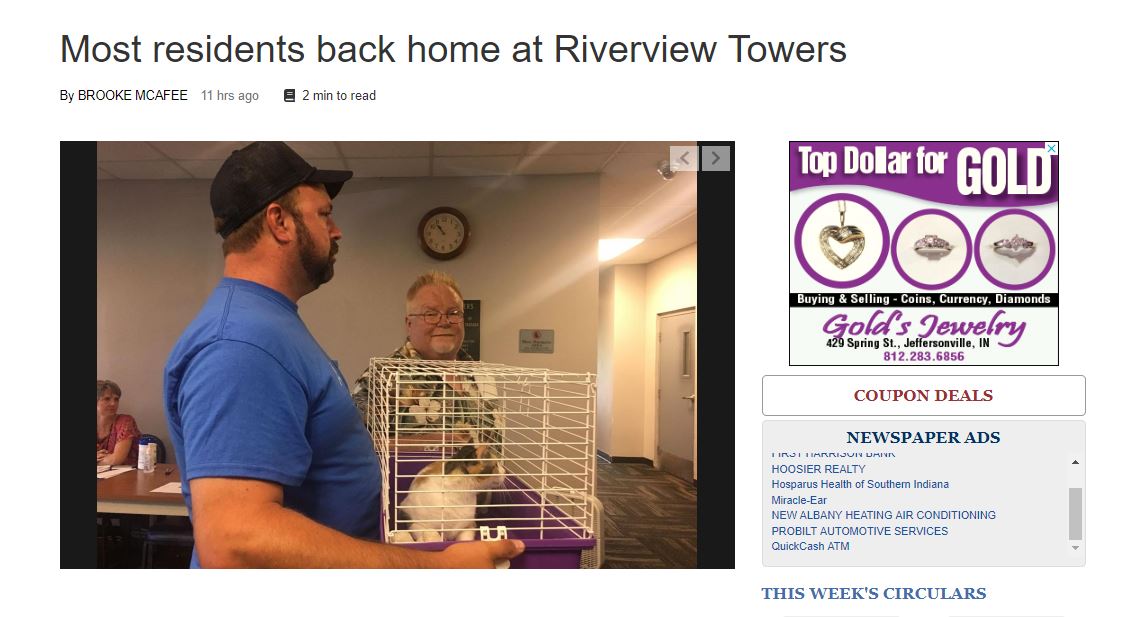 Matt was pictured in Thursday’s News and Tribune helping Riverview Towers residents (and at least one cat) return to their homes after their displacement in the wake of the recent crisis of David Duggins’ ongoing gross managerial incompetence.

The new job at NAHA comes directly on the heels of the $10 million Reisz Mahal city hall relocation project, approved in council by a 5-4 margin, and with Matt’s crucial “aye” vote coming without a single word of attributable public explanation.

In fact, Matt has been a reliably affirmative vote for Mayor Jeff Gahan; although statistics aren’t readily available, he probably has voted with mayor and party in excess of 90% of the time since taking office in 2016 — and it’s hard to blame this lopsidedness on the perfidy of county government.

In Matt’s defense, it’s also impossible to know how often he has been subjected to threats and bullying from vile party chairman Adam Dickey, or the extent to which these pressures, and the local party’s enduring small-pond dysfunction, have contributed to this muddled situation.

(You want my opinion? Local mirror-gazing Democratic fixers like Dickey, Gahan and the elder Nash never have given a solitary damn about Matt as a person, only how he might be utilized in pursuit of their self-aggrandizement.)

In 2015, when 5th district Democratic primary winner Dustin Collins was forced to withdraw from the race for reasons of health, Matt was chosen as replacement by the same Democratic Party precinct apparatus overseen for decades by his father.

The Green Mouse believes Matt inquired about the NAHA job or was pointed in this direction earlier in 2018, prior to the city hall relocation fix. It isn’t possible to know precisely whether there is any connection between the timing of the position and Matt’s vote on the Reisz boondoggle.

But it looks really awful, any way you cut it. Since time began, New Albany has been one humongous, underachieving swamp of constantly revolving quid pro quos.

Naturally, we can expect Shane Gibson to ooze forward in a pool of cash-scented K-Y Jelly, arrogantly assuring us there’s nothing at all unethical, or suggestive of a conflict of interest, about just another councilman getting a federal government job.

Except Matt hardly is just another councilman, and it remains that every last decision-maker at the New Albany Housing Authority was put into place not by a clueless bureaucrat in Washington DC, but by toadies and bootlickers inserted into NAHA by Jeff Gahan himself, as charged with performing politically-motivated tasks precisely like this one.

Lest we forget, last year the housing authority was abruptly and violently annexed by Gahan, and its governing board hurriedly packed with drooling sycophants intimately connected to the Democratic Party’s political patronage machine.

Overnight, NAHA became Gahan’s and the Democratic Party’s new toy, and a way of providing bored C-minus students with a delightful local social engineering experiment to call their very own.

Throughout this process, Matt the councilman remained resolutely (and regrettably) silent. He had nothing to say when Gahan’s right-hand hatchet man, Duggins, was hired as NAHA director at full pay without any experience whatever, replacing the summarily axed Bob Lane, quickly proving to be so flagrantly unqualified for the job that Tony Toran had to be hastily appointed as deputy director,

By the way, Toran is a key Democratic Party hack from way, way back.

These days the New Albany Housing Authority functions as a colonial possession of a corrupted political party and its megalomaniacal mayor, and now a sitting councilman works for the degraded satrap — to be sure, in an ordinary low-level job located nowhere near management level, one not to compared with the palm fronds, sweet grapes and vestal virgins handed on a silver platter to the fantastically overmatched Duggins.

To be blunt, it’s Matt’s solemn duty as councilman to scrutinize matters like Duggins’ actions at NAHA; he hasn’t done enough of it, but now Duggins is Matt’s boss. How is this NOT a conflict of interest?

We’re not close friends, but we’re friends nonetheless. I like you and I’ve struggled with writing about this, but you’re too damned smart not to grasp the implications of what you’re doing. You’re neither an unwitting dupe nor an unfortunate bystander, and yes, you’re complicit in the perpetual nastiness of these self-appointed pillars of society, although as a mitigating factor, we all can see the way they’ve never refrained from using you for their own petty political ends.

Whatever the background and intent, you’re in an ethically untenable political position, and one of these two paid positions needs to be terminated. Either stop being an NAHA employee, or leave the city council seat.

There isn’t much alternative from an ethical standpoint. Whatever your choice, integrity genuinely does matter, even when you’re the only one in the club embracing it.

Your decision to shed one of these two positions will be the single most ethical act to occur on the part of a Democrat during seven years of increasingly narcissistic Gahanism, something to be approvingly recalled in the years to come, and pleasingly contrasted with the toxic legacy of forever posturing second-raters like Dickey and Duggins … and Warren, who quite plainly is a schlub even if he’s your father.

Best of all, this can be a chance to get your life back from their insipid clutches, and to do so on your own terms. They’re killing you inside, aren’t they? Maybe it’s time they picked on someone else for a while.

I encourage you to consider it.