Jeff Speck forwarded the following link at Twitter, and if you’re like the lady who wrote to the newspaper the other day from an anguished but belated realization that someone had changed the street grid in New Albany without bothering to ask her permission, and demanded to know who was responsible, then kindly note: had Speck’s revolutionary recommendations been fully embraced by Mayor Deafrey Gahan, this woman’s tenuous grip on reality would have eroded even further by now.

Maybe not everyone should be allowed to drive.

However, this column is about beer, not mayoral incompetence or car-centric nut cases, so let’s move forward to an interesting glimpse at one writer’s selection of nine bars that every architect needs to visit.

To me, the essential ingredient for bucket-list bars is that they’re located somewhere else, preferably in Europe, and have good adult beverages to drink — namely, beer. As such, I’ve actually been to the Hofbrauhaus and Hirschgarten for lagers, and once walked past the American Bar in Vienna.

This said, taking the author’s task as our own, it’s hard to imagine a more worthy addition to the architectural list than this gem. 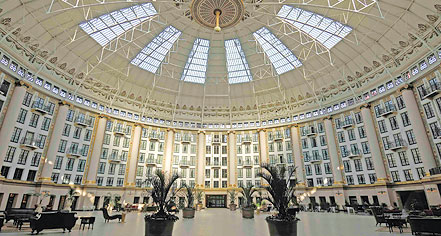 The bar at the West Baden Springs Hotel, just up the road from Nawbany adjacent to French Lick in central Hoosierland, is situated in the atrium beneath a 200-ft dome once dubbed the 8th Wonder of the World.

The 9 Bars That Every Architect Needs to Visit, by Kaley Overstreet (Arch Daily)

When you think of your favorite spot to grab a beer, what architectural features come to mind? Is it the swanky furniture, themed artwork, or the heavily designed cocktail menu? Today, the aesthetics of bars are now as much a draw as the drinks themselves. From movie set inspired spaces to rooftops that offer spectacular city views, we’ve compiled a list of nine bars and beer gardens that every architect needs to cross off their list.