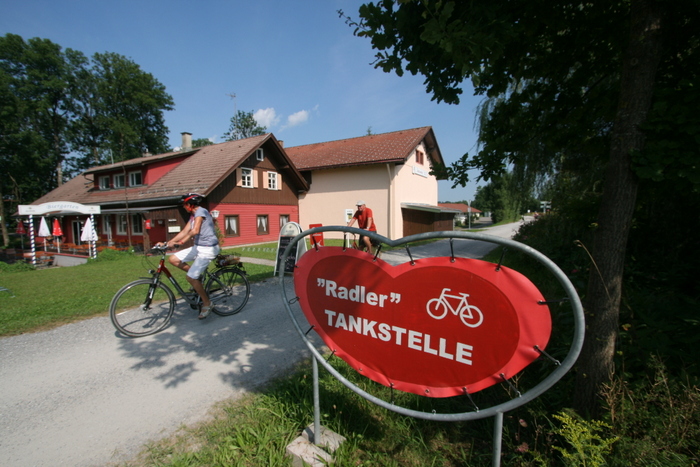 Last month I was reminiscing about the Frankfurt-Vienna beercycling ride 15 years ago.

BEER WITH A SOCIALIST: That time in 2003 when we rode bicycles to Schneider Weisse.

Counting side trips and frivolity, the journey turned out to be roughly 550 miles, just about all of it on paved and marked bike paths separated from motorized traffic. There was some gravel, though not much. Much of the time these were country lanes between villages, woven together and connected with short stretches of custom-built pathway.

After Passau in Germany, the way to Vienna was along on side or the other of the Danube River, which I think was Europe’s first long-distance bike route. It’s a veritable interstate highway, with signage advertising services for cyclists, not cars.

Somewhere along the way in Germany or Austria I saw a pictograph of a man on a bicycle hoisting a foamy stein of beer: “Radler Tankstelle, 100 meters.”

So, it meant “place for a bicyclist to fill his or her tank” — with beer. Now THAT’S what I call civilization.

“Radler” also has come to identify a beer for bicyclists, sort of a German-style Shandy, half of it lager (or wheat beer) and the other half carbonated fruit soda.

The term Radler originates with a drink called Radlermass (literally “cyclist liter”) that was originally created by Innkeeper Franz Kugler in a small town named Deisenhofen, just outside Munich. During the great cycling boom of the Roaring Twenties, Kugler created a bicycle trail from Munich, through the woods, which led directly to his drinking establishment. On a beautiful June day in 1922, a reported “13,000 cyclists” crashed Kugler’s party. Fast running out of beer, he blended it 50/50 with a lemon soda he could never seem to get rid of, and the rest is history.

Cutting the beer with soda also halves the alcohol content. I’ll concede that personally, while I can endorse the notion of a Radler or Shandy, it never made a great deal of sense to me.

While exercising I prefer either water or the soda straight, without the beer. Afterward while recuperating, I’m all about the beer without the soda. But different strokes, and at Pints&union we’ll be carrying cans of the Stiegl Radler, which is lager and grapefruit soda.

As a side note, the late great Kevin Richards, who unfortunately missed the 2003 biking trip, is the only person I’ve ever known who could refresh himself with multiple Trappist Ales during a lunchtime sag in Belgium and cycle another 30 miles.

It’s another reason why he can’t ever be replaced. Wherever Kevin is, I hope he’s riding.