Earlier this week, I hesitantly delved into the archives for a look at the (in)famous Public House beer binder.

BEER WITH A SOCIALIST: Recalling “Love on the Beach” and taking note of changing times.

BEER WITH A SOCIALIST: On beer lists, beer-speak, and beer geeksplaining.

The views that follow are from the beer list in early 1998, pre-binder. Note the scribbling in the margins. Like a collection of demos shaped only gradually into a song, they chart the relentless evolution toward the fondly recalled three-ring presentation.

The first real desktop computer we had probably came along in 1996. It cost somewhere around $3,500, possessed all the requisite bells and whistles, and wouldn’t be able to power a solitary Facebook memory today without flashing “tilt.”

I dimly recall someone loading Microsoft Publisher on the new computer. Probably none of these beer lists would have happened had I been restricted to the embryonic word processing capability we had before the pricey computer purchase.

Looking back, it isn’t clear where I found the time to write these surprisingly detailed beer lists, although it’s worth noting that until 2001 or 2002, there also was a monthly edition of Walking the Dog (the newsletter of FOSSILS) to write, print, collate, staple, stamp and mail.

Someday I’ll rediscover them, too. 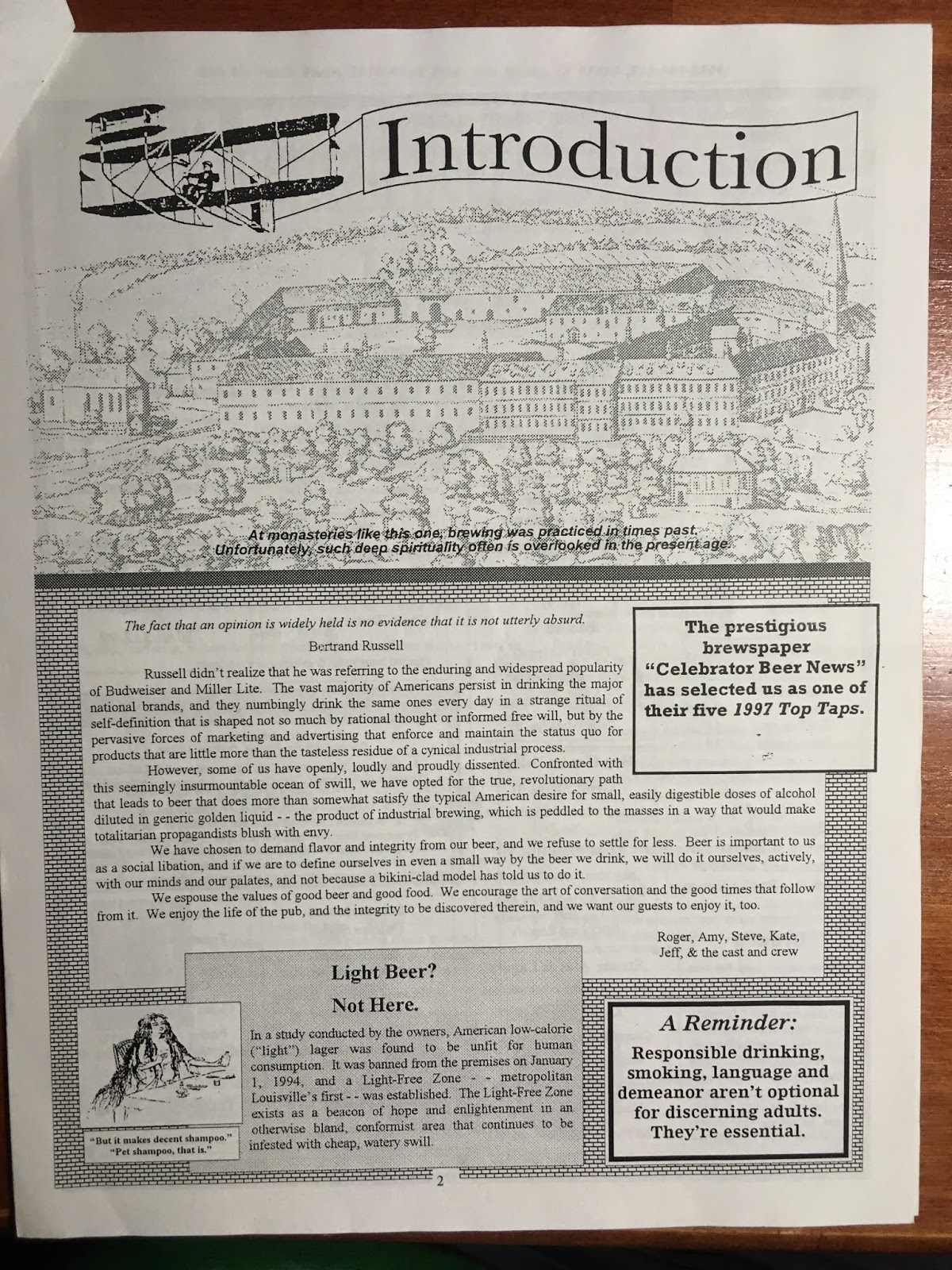 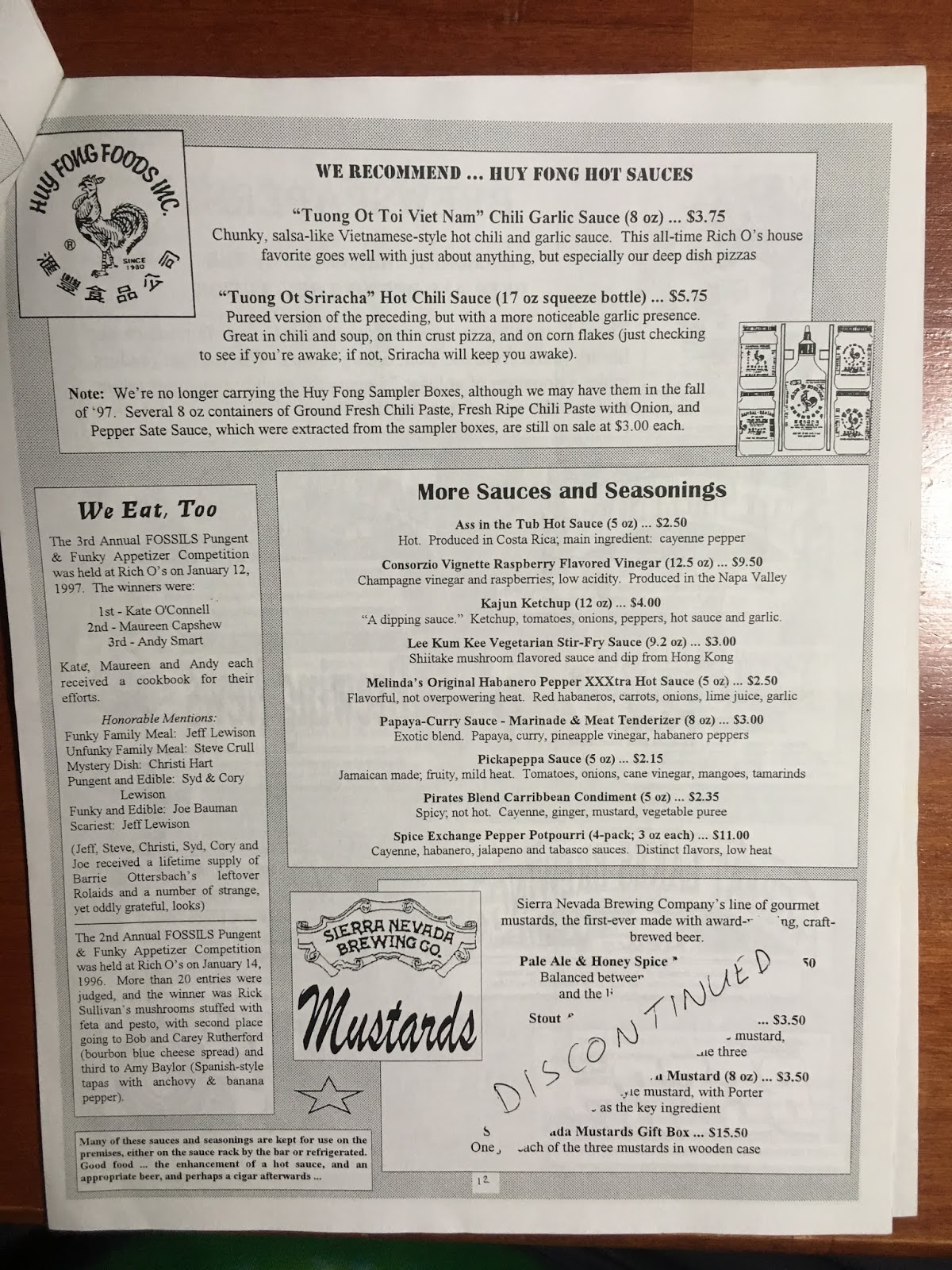 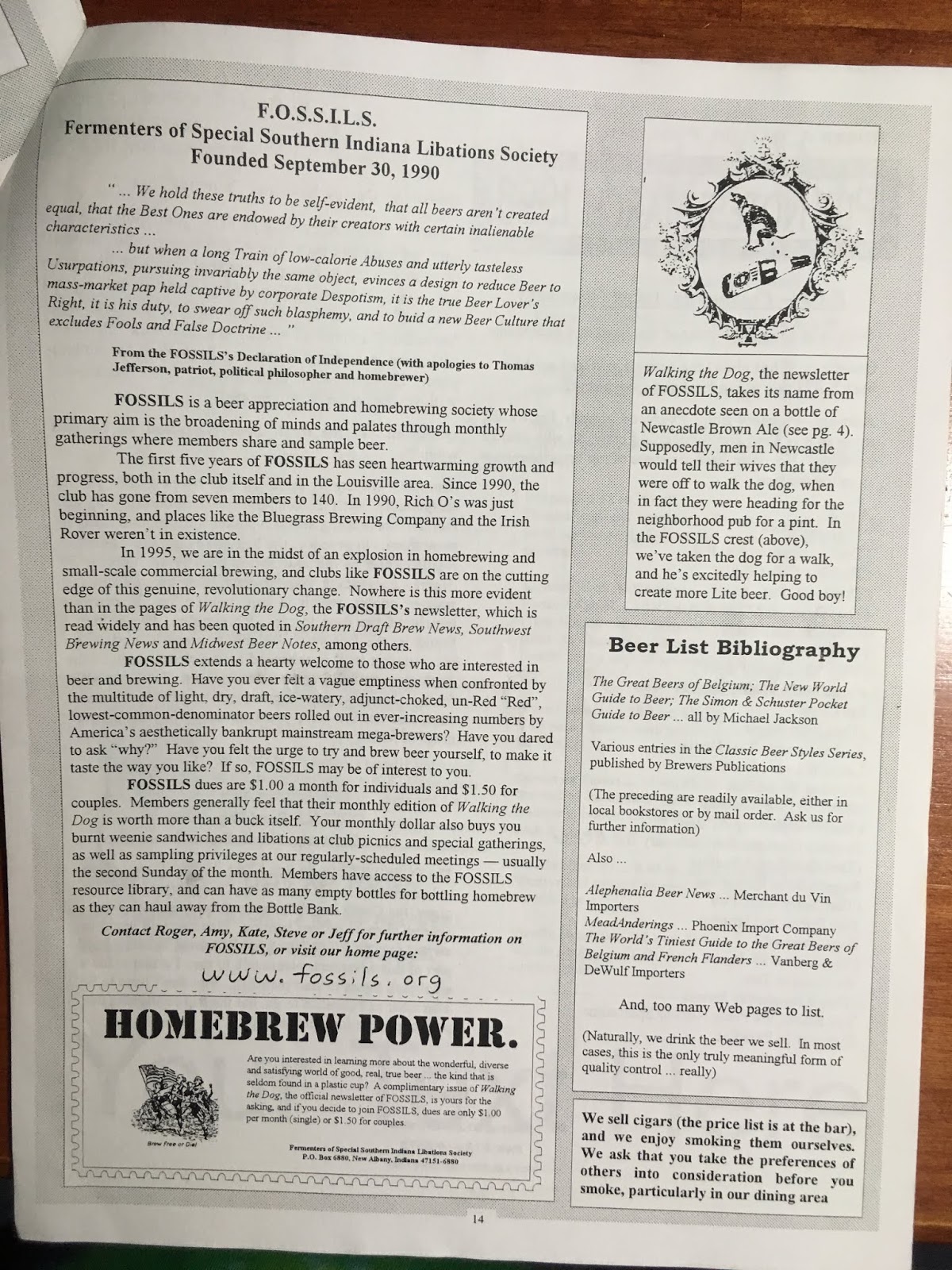 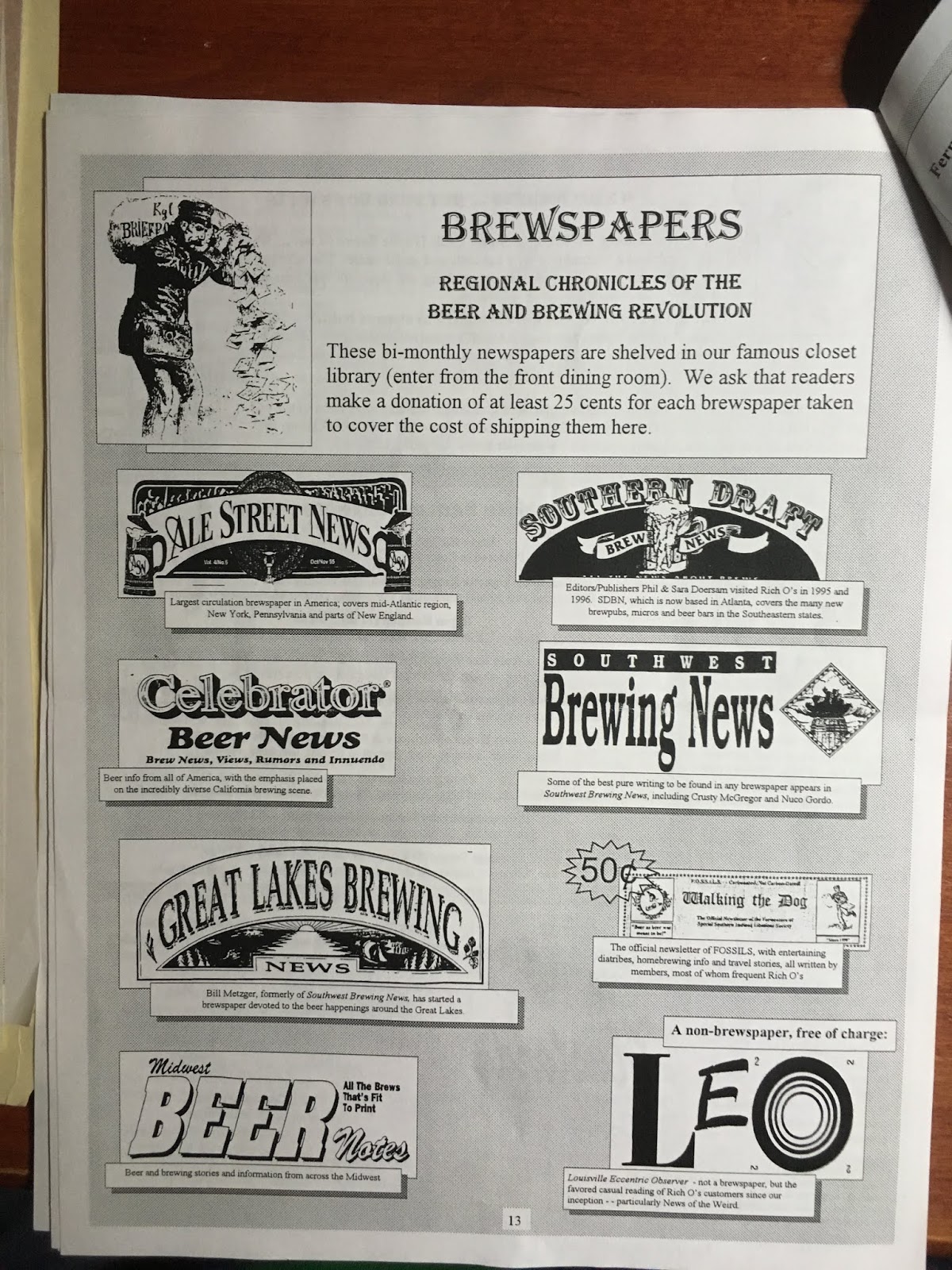 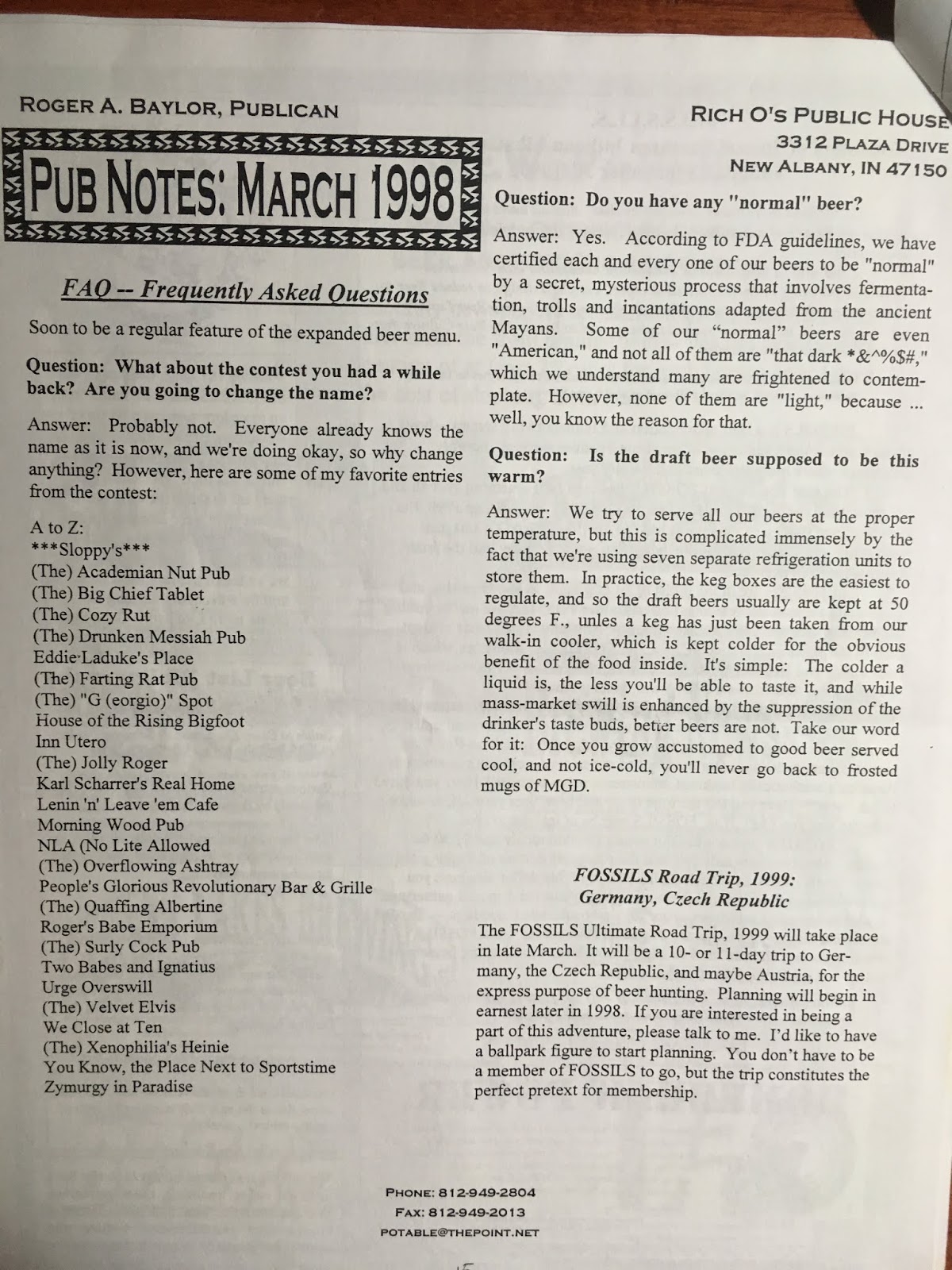 The actual number of bottled beers on the list in early 1998 was 150 or so, with perhaps seven draft lines.

At times I wonder what would have happened had we not chosen to pursue brewing on premise, and stuck with the “good beer bar” motif without our own house beers as part of the mix — and the investment.

Consequently, what strikes me about viewing these 20-year-old beer lists is the relative absence of American craft beer. Of course, we didn’t refer to it as “craft” back then.

These microbrews were just beginning to trickle into range, often sporadically. There was a big dip when the dot.com brewery bubble burst at the end of the decade, and as we know, it was only a prelude to the current tsunami.

Crazy days, indeed, and I suppose I’m lucky to have survived to tell the tale, although it would be nice to be able to remember a little more of it.