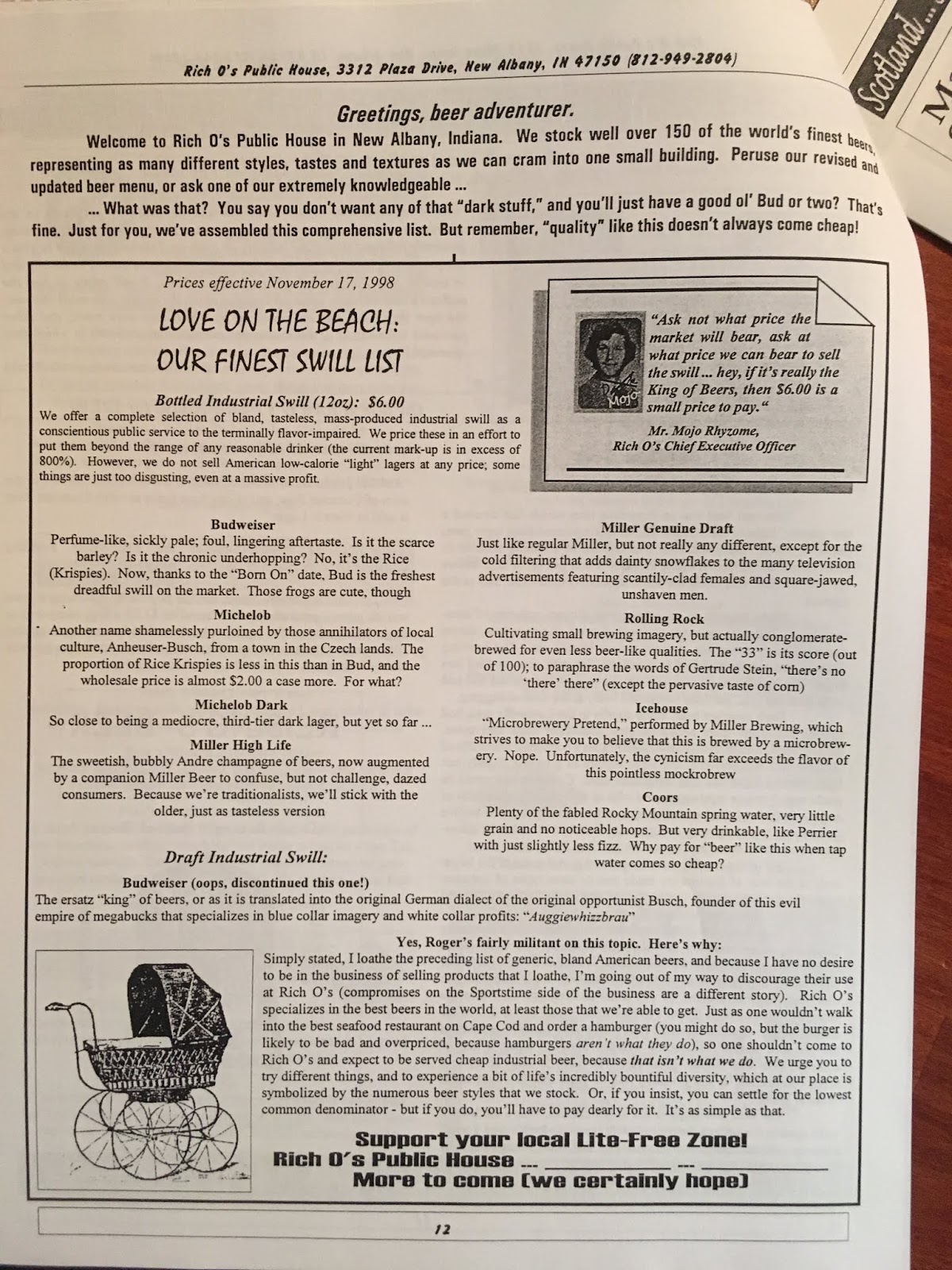 In my view, the game is won.

Numerous details remain to be sorted through, but in large measure, decades of struggle toward greater choice in better beer have brought us past the period where heightened vigilance is necessary. I can relax, live a little and have some fun.

As in this most ancient of beer jokes: Why is American beer like making love on the beach (or in a canoe)?

Because it’s fucking close to water.

The joke has become obsolete, but it illustrates the beer lover’s mindset during those long, lean years from the advent of mass-market “light” beer (late 60s) through the 1990s, when the first wave of the beer revolution crested. Those were watery times, but during the past 15 years, the American beer scene has changed beyond recognition.

Perfection is an unattainable state of existence, and yet the pendulum has swung decisively toward greater choice in beer, to the extent that rather then critiquing too few good beers on an establishment’s list, contrarians like me can’t complain that too many of them are hoppy IPAs.

“Love on the Beach: Our Finest Swill List,” was an indisputable classic from the Public House beer list binder during the 1990s. It addresses a state of consciousness in wartime, emanating from righteous indignation that seemingly few beer drinkers would step outside the norm and try something different.

Contrary to popular wisdom, there always were suitable alternatives.

The first draft lager featured at the Public House was Carlsberg, later replaced by Pilsner Urquell. There were milder beers in bottles, like Warsteiner. Happily, most visitors ultimately were willing to give choice the old college try. Some never escaped brand loyalty to the giants, and this always struck me as sadly limiting.

Granted, I could be an asshole about it, but most of the time a helpful one.

Swill left the building entirely in 2002 with the advent of brewing on site, but in the interim, the King of Beers eventually rose in price to $8.50 at a time when most places asked $2.00 — and one schmuck actually bought one. I hope it was royal enough for him.

That was then, and this is now.

Pints & Union, or Pints&union (stay tuned for the explanation) will be opening at some point in the next 10 days. There’ll be alcoholic drinks other than beer, including wine, cider, distilled favorites and cocktails, but of course my role is to devise and administer the beer program, and toward this end pub owner Joe Phillips and I spent much time brainstorming (and drinking) beer.

As stated previously, the beer list will be firmly classicist, with many legacy/heritage brands and golden oldies — the greatest beer hits of the 1300s through the 1900s.

However, there’ll also be “new” classics, maybe even a hazy IPA, as well as a few beers I’d never have opted to offer at the Public House: Old Style, Stroh’s and Little Kings among them.

But — and this is very important — Pints&union isn’t the Public House, and it so happens that Old Style, Stroh’s and Little Kings were personal favorites of mine in the pre-craft era.

I’m not a beer snob any longer, and Joe’s joint won’t be trading in white whales. His goal is egalitarian, and I eagerly subscribe to this ethos. Diversity in beer implies a broad range and hard thinking about price points. Taking these into consideration isn’t a compromise at all.

I’ll always be synonymous with the “Love on the Beach” subsection of the beer binder, and that’s fine by me. It is inseparable from a time and place, and I’m proud of the work we did. Two decades have passed, and the Public House remains even though I’ve moved on.

The war, whether internal or external, is over, at least for the moment. It gladdens my heart that a unique and distinctive tradition will be created at Pints & Union, which will be a synthesis of all the experiences preceding it.

We’re just about there. In the coming days, I hope to keep readers informed of our progress.