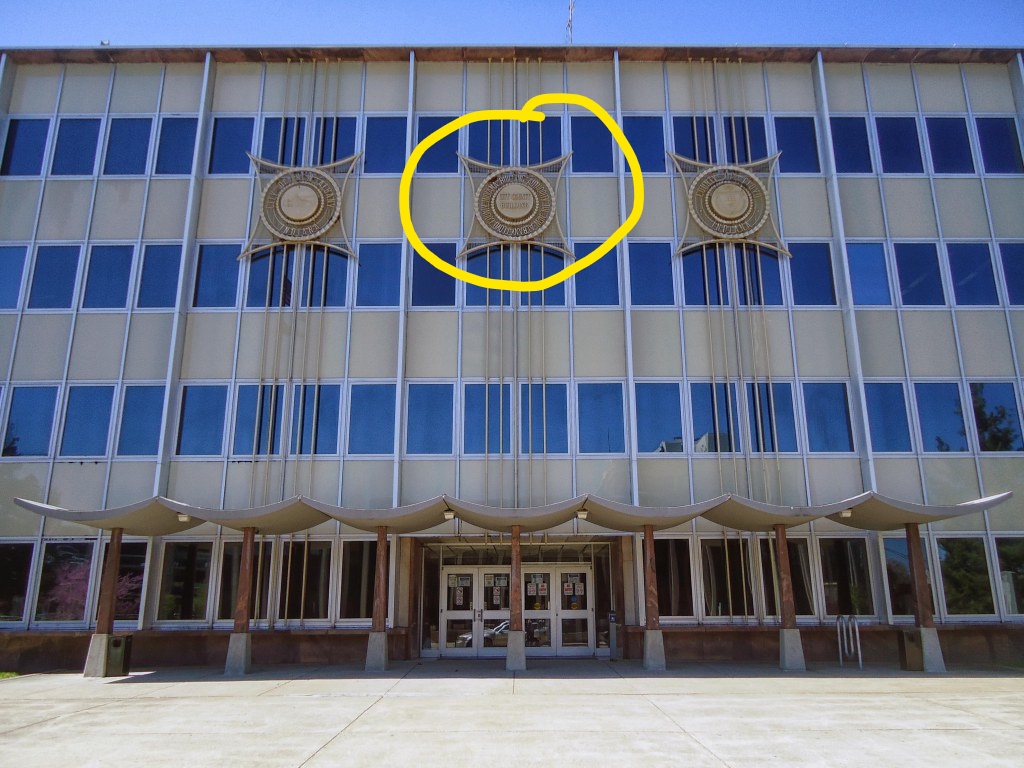 It’s almost impossible to find any information about the NA-FC Building Authority, on-line or otherwise.

However, this description of the Indianapolis-Marion County Building Authority conveys a sense of the beast in question — and the era 1959-1962 is a close match for the construction of our building, which was the first such composite office to open in the state.

The Building Authority is an independent municipal corporation whose purpose is to serve the needs of local government in acquiring, financing, constructing, and managing building projects of a substantial nature. The Indianapolis-Marion County Building Authority is an independent body corporate and politic organized under Chapter 54 of the Acts of the Indiana General Assembly for 1953, now cited as Indiana Code §36-9-13-1, et. seq.

In the early 1950’s, various civic and governmental leaders in Marion County determined that an independent municipal corporation was needed to finance and construct a new city-county building to replace the then-obsolete and deteriorating Marion County Court House and the old City Hall on Alabama Street. The new structure would house City and County government, the police department and the Marion County courts. Previous experience had indicated that an independent, professionally-managed entity would best serve the long-term needs of local government for a first-class government office building.

Lately the NA-FC Building Authority is back in the news.

Judge’s ruling may pave way for Floyd County jail renovations, by Chris Morris (All Tom May, All of the Time)

NEW ALBANY — Special Judge Vicki Carmichael’s ruling late Tuesday may have opened the door for the proposed renovation to the Floyd County Jail to move forward.

The New Albany-Floyd County Building Authority and City of New Albany disputed the agreement signed in 1992 calling for the county to receive ownership of the jail once bonding was paid off. But Carmichael ruled the lease giving Floyd County deed to the property was valid.

With the deed, Floyd County can now bond the jail renovation, which with soft costs will be around $15 million. The plan is to add 110 beds to the current facility along with other renovations. Instead of having to pay $10 million in construction costs up front with funds from hospital sale proceeds, the Floyd County Council can now finance the project for up to 20 years.

The majority of the council has been reluctant to move forward with the plan due to concerns over costs and what it will do to the county’s cash flow. “Can the county afford the project,” is the question most asked by council members. Floyd County is staring at a $4.9 million budget deficit in 2018. By a 4-3 vote, the council rejected a recent proposal to fund the renovations with hospital proceeds.

But one of those members who voted no, Denise Konkle, said she would be prepared to move forward with the plan now if it can be bonded.

“Absolutely. It definitely changes my ability to move forward,” Konkle said after hearing of Carmichael’s ruling. “Now we have the ability to bond and not put such a strain on the county’s cash flow.”

This situation may or may not be settled.

Observing the situation from afar, it seems obvious that the city has joined with the Building Authority in pushing back against Floyd County government in the matter of jail improvements, by feeding the following conditions into the whirling maw of the Jeff M. Gahan Random Chaos Generator and Campaign Finance Divining Rod.

Then there’s this one:

I’ve probably left a few points out, but the gist should be clear.

All these feints, jabs, maneuverings and lawsuits are politically-motivated delaying tactics. The chess board might look different in January, allowing Gahan an advantage in negotiations with incoming sheriff Mills for the NAPD’s co-habitation arrangement.

It also appears that Team Gahan might be building a case, in effect, that City Hall would owe nothing toward the City-County Building upon fleeing to Reisz, but rather the county would owe the city a buyout for the city’s share.

It’s perfectly clear that one of Gahan’s chief goals with the Reisz Elephant office transfer is to disrupt city-county relations, both as prelude to this year’s county elections and next year’s city elections, when a centerpiece of his re-election campaign will be to depict county government as the “enemy” and himself as the only one who can save the city from dastardly uni-gov.

Most ranking Democrats already have consumed copious amounts of this Kool-Aid. It’s impossible to have a chat with a single one of them without perfidious county government entering the conversation.

I’ll suggest that negotiations are a good thing: “Not with county. I’d trust a North Korean first.”

Surely the 800-lb gorilla perched nearby is the City-County Building’s future disposition. Insiders have told me to expect lawsuits, and I see no reason to doubt this; Gahan’s theory of disruption might well result in considerable acrimony and expense.

Politics in any size of pond is about power, and power is money, and so I submit that we’re seeing a similar strategy of disruption in New Albany, as directed by Gahan. He intends to disrupt county government, but also New Albany’s city council.

It doesn’t require a PhD to see that since taking office, Gahan has seized every available opportunity to sever ties with county government. That’s because Democrats are toast in the county, and at best, capable only of rearguard actions. To preserve the party’s municipal system of patronage and keep the money flowing, the city power base must be fortified and walled off.

Moving city hall to a renovated 19th-century warehouse is about Gahan’s colossal ego, first and foremost.

Dead last is historic preservation, about which Gahan cares not one jot — but the backroom Reisz deal yields Dear Leader permanent control of David Barksdale, who hasn’t even put up a fight about it. If you’re a sincere historic preservationist, there’s nothing in any of this for you apart from being manipulated, and when it’s over, discarded.

Meanwhile, speaking of historic preservation, here’s an interesting article about the origins of the City-County Building, from which this post’s introductory photo is drawn.

All of these elements, including columns from the old courthouse, combined to create a building that was respected enough to be listed among Indiana’s best new building architecture in 1963 … the courthouse is undoubtedly modern, but at 57 years old it’s actually eligible to be listed on the National Register of Historic Places.