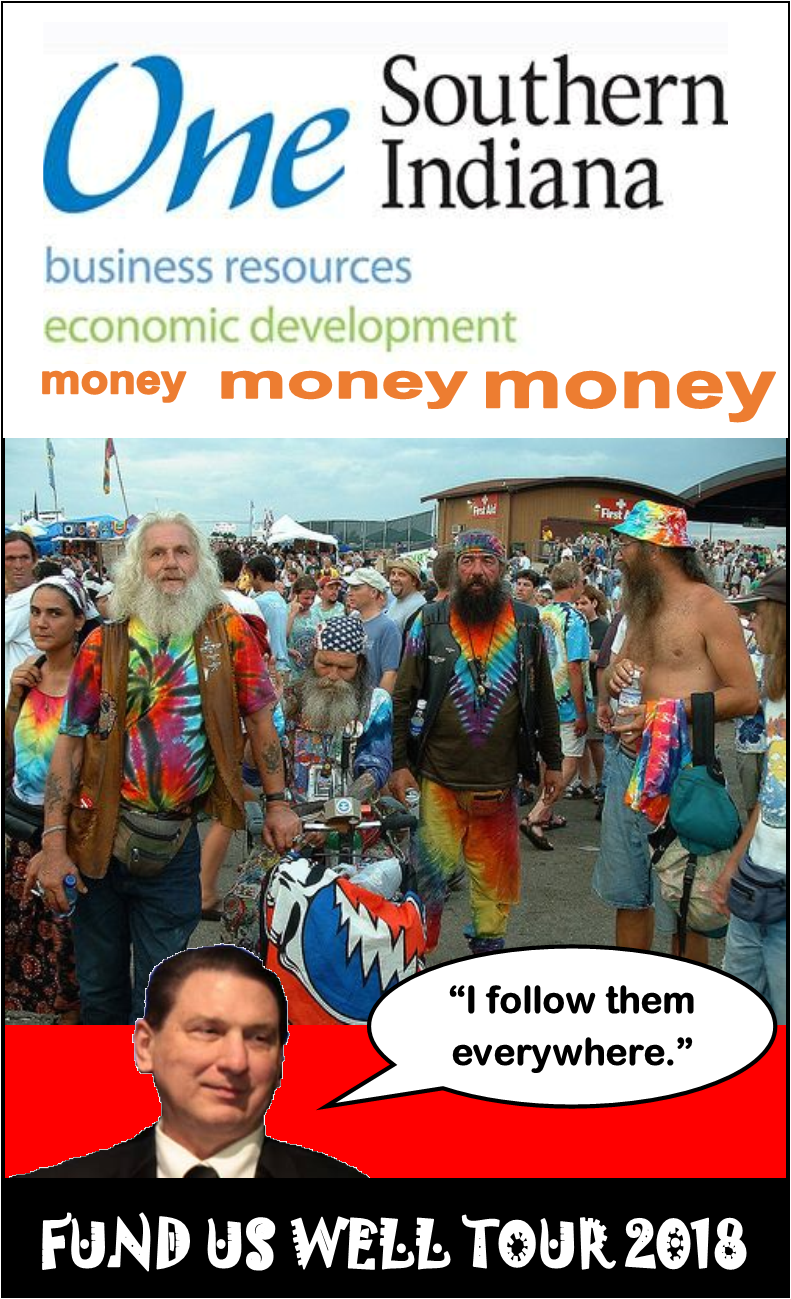 Apparently One Southern Indiana’s annual tour of legislative bodies is underway, and the Tom May Picayune sent new reporter Brooke McAfee to cover the performance before Jeffersonville’s city council.

JEFFERSONVILLE — One Southern Indiana reviewed its cumulative economic successes in a recent report of jobs, projects, annual payroll and new capital invested in Clark and Floyd counties since the organization’s formation in 2006 during a presentation to the Jeffersonville City Council Monday.

This seems to imply that 1Si seeks credit for the entirety of economic activity in Southern Indiana since 2006.

That can’t be right.

On second thought, it’s probably intentional. The Green Mouse sent an e-mail about guileless suckers to the ghost of PT Barnum, and we’ll let you know the answer as soon as it arrives.

I missed a few New Albany city council meetings, and perhaps 1Si has come already with hat in hand, but no matter. Here’s an excerpt from ON THE AVENUES from May 18, 2017.


ON THE AVENUES: Are dissidents born or made? A humanities major examines his life and locale.

Ostensibly Dant Chesser was there to outline steps for effectively leading a non-profit organization, and this she managed to do with requisite efficiency.


However, the second half of her presentation quickly digressed into the customary advertisement for 1Si, although this time with a novel twist.


According to Dant Chesser, the large manufacturing conglomerates most eagerly courted by 1Si (as opposed to independent local businesses and grassroots entrepreneurs, who must settle for trickle-down scraps) prefer employees holding one of the six “top earner” university degrees, including engineering, computers and electronics.


However, according to her PowerPoint slide, higher education insists on disgorging twice as many graduates who’ve been awarded the six least “useful” (and lowest paying) degree choices: English, philosophy, history and the like.


It would seem that both Dant Chesser and the fluffed and subsidized multinational beneficiaries of the neo-liberal order, upon whom 1Si depends to make payroll for 14 staffers, are offended by this ratio.


She made no effort to conceal her disdain for those viewing education as anything other than glorified vocational training, and considering the fact that I wasn’t the only humanities major in the room, her summarizing anecdote of choice was tellingly errant.


Dant Chesser told us of her recent chat with an art history major who was having trouble in the job market. Well, what did he expect? Art history? What sort of guidance counselor would recommend studying subjects as perennially useless as art history?


Perhaps those guidance counselors grasping that the object of education isn’t always to match obedient hamsters to their proper wheel, but to produce humans capable of thinking. The fact that “fake” news is such a concern these days might enter into this paradigm, wouldn’t you … think?


Seemingly nowhere in Dant Chesser’s narrowly defined (read: confined) world exists the type of broad, individually tailored choices of human aspiration that depart from economic development of the “we’ve always done it this way” variety, which by breathtaking coincidence is the type best calculated to advance the specific capitalist format to which 1Si has attached itself like a leech – hence the blood money of its council funding request.


The real problem might be that humanities majors have been made aware of different trends in the history of thought, and as such, they’re the ones most likely to question Dant Chesser’s premises.


Which I did, aloud and joyfully.


Bizarrely, another of her slides testified to the critical importance of every Southern Indiana resident meekly accepting 1Si’s version of the Regional Cities Initiative, so as to provide unanimity in pursuit of a “collective” path forward – and yes, “collective” is precisely the word this crony capitalist enabler used.


Irony is dead, but Trumpolini didn’t kill it.


As a direct result of past concerns proffered by anti-establishment dissidents, at least the money 1Si is requesting of our council will be put to a specific, directed use: WorkHub, a workforce training initiative.


That’s all well and good, but is this workforce training available to art history majors, or must we collectively denounce the pursuit of non-vocational education before disbursing the dollars to applicants?


Until Dant Chesser answers this question (a contrite public apology would be more suitable, but I’m a cynical realist), I recommend to council that the money be withheld. It won’t, and I can hear the backslapping already.