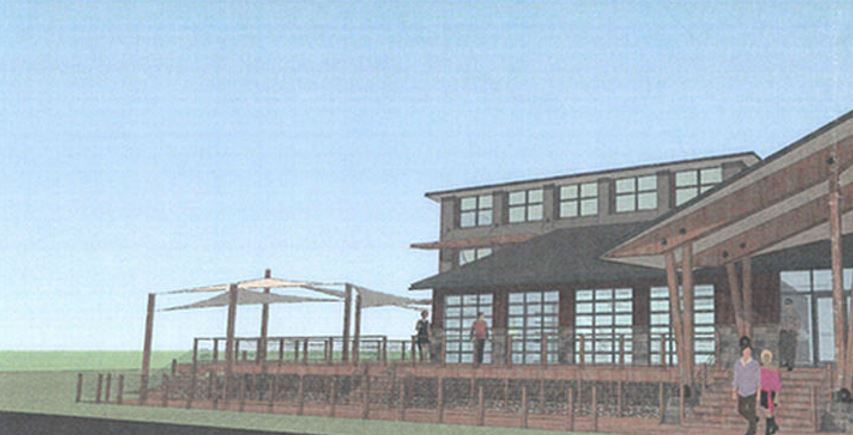 Our Lady of Perpetual Hops, the new brewery planned for Floyds Knobs, has passed its initial regulatory hurdles. The article explaining this comes far below, but first you must abide my telling you why the preceding depiction of OLPH took me back a decade or so.

The early 2000s were my peak in terms of bicycling. One of my regular loops included Utica Pike in Jeffersonville (opposite JeffBoat), where this architectural feature captured my attention. As far as I know, it remains there. 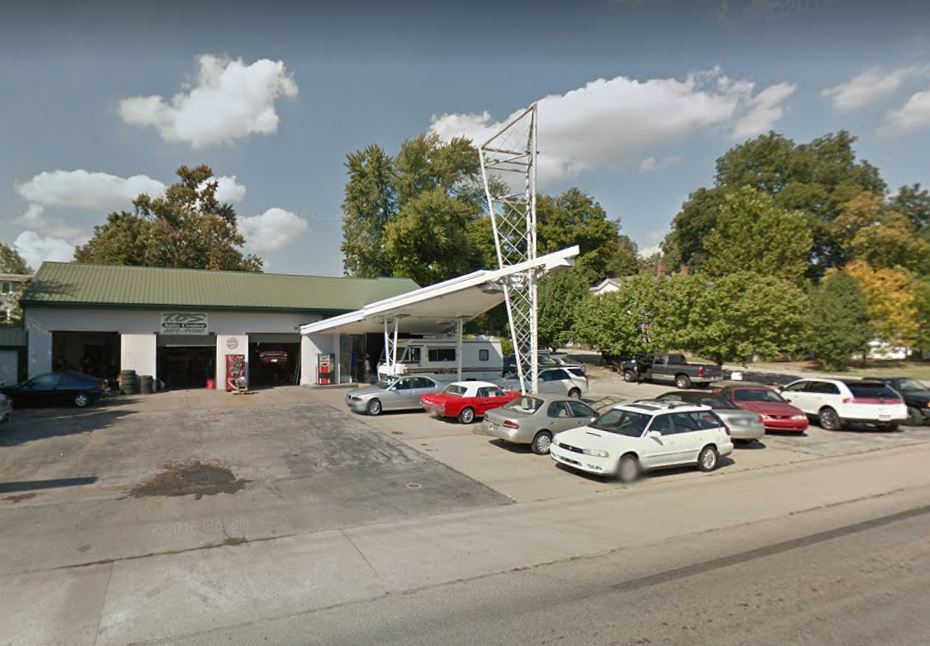 By the time 2008 rolled around, planning for Bank Street Brewhouse was under way. We were interrupted by the recession, but pressed on and decided on the former location of the “day-old bread store” in downtown New Albany.

I’m not sure exactly when I was shown this drawing by Lazar Markovich Lissitzky (El Lissitzky), or who brought it to me (Mose Putney, perhaps?), but my curiosity was aroused. Lissitsky’s “Lenin Tribune,” a Constructivist moving speaker’s podium, immediately hijacked certain brain pathways and became connected with the Utica Pike architecture. 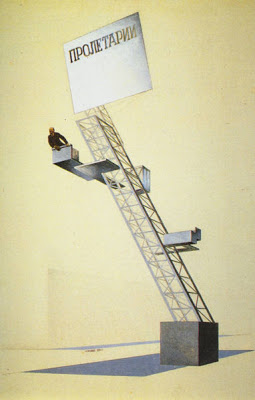 At the time, we were determined to buck the downtown trend, whereby most of the entrepreneurs wanted to be ensconced in “historic” buildings. Not us; we’d take the modern one. In my mind’s eye, I could see a grafting of Utica Pike with Bank Street, with the vertical part looking more like Lissitzky’s podium. 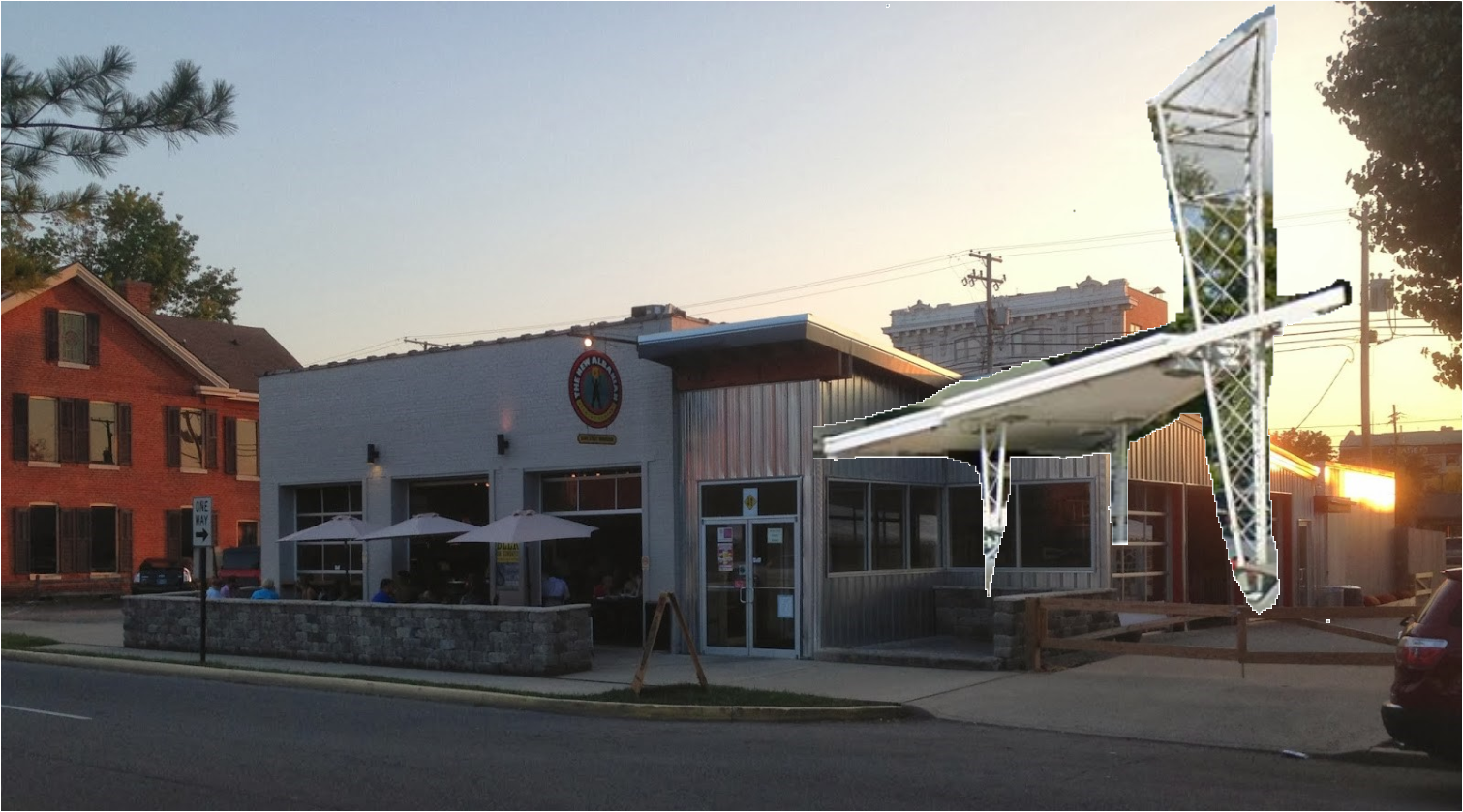 I’m hoping you can see how the OLPH sketch prompted these recollections. Just imagine the podium facing in the direction of New Albany’s City County Building, not unlike a minaret. I’d have been the muezzin of sorts, and it would have been the finest bully pulpit ever.

Nothing came of all this, as our time was far better spent trying to keep the new company solvent. But it was a wonderful fantasy while it lasted, and when I wrote about Lissitzky at the Potable Curmudgeon blog in late 2008, it elicited one of my favorite comments ever.

Speaking of art, a link:

Reds, whites and truths: A century after the Russian revolution, a showcase of its art (The Economist)

At the Royal Academy, a sinister history lurks beyond the frame

… “Revolution: 1917-1932” covers the same 15 years as Punin’s show. The period has suffered some neglect. The myth goes that in the years after the Bolshevik revolution, bland socialist realism stomped on the avant-garde. In fact, after the revolution but before Stalinism tightened its grip on culture, there was a frenzied gasp of creative brilliance. Artistic, technological and political innovations clashed and co-existed. Kazimir Malevich turned the geometry of suprematism to figurative portraits of peasant farmers. Pavel Filonov would use the kaleidoscope fragments of his “formula” paintings to depict tractor factories. Buildings designed by El Lissitzky riffed on the crooked perspectives of photo-montage, and on the uncompromising functionality of industrial machinery.

The restaurant’s team, Rob Pappas (who comes from a Catholic background), along with Mark Cox, Kyle Richmer and Greg and Tanner Wortham — all Southern Indiana natives — hope to open the brewery in spring of 2019 on a 10 acre lot that Pappas bought in 2009.

On the Floyds Knobs property, the owners are planning a two-and-a-half story restaurant/brewery building with a stage, a garage door that opens to an outdoor area and the ability to brew 210 gallons of beer at a time …