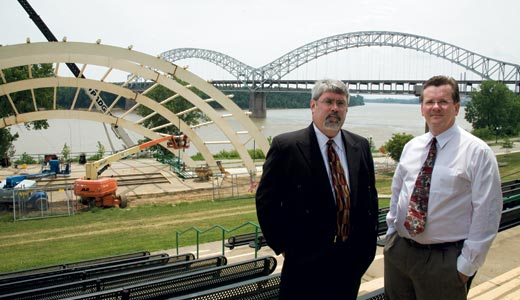 There’ll be no introductory commentary from me, apart from the basics: the article appeared on June 17, 2009, and in many ways, it depicts a place that no longer exists.

Or does it linger still?

Rinse and repeat: New Albany Wants and Urban Renaissance. Have You Heard This Story Before? by Cary Stemle (LEO Weekly)

… The New Albany narrative is not unique. From the moment someone coined the term “suburbs,” these stories have moved inexorably in predictable directions. Suburban malls raided key merchants from downtowns everywhere, setting off a vicious cycle of degeneration, of both infrastructure and public perception. Some cities adapted and thrived, and some died. And a great many — New Albany arguably fits on this list — seem to float on some continuum where things never hit bottom but never go quite right, either.

Those cities become interesting when there’s an ebb large enough to suggest, objectively speaking, that chronic impediments can actually be overcome. Amazingly, some people are starting to believe New Albany can knock back 40 years of defeatism. It is an intriguing proposition.