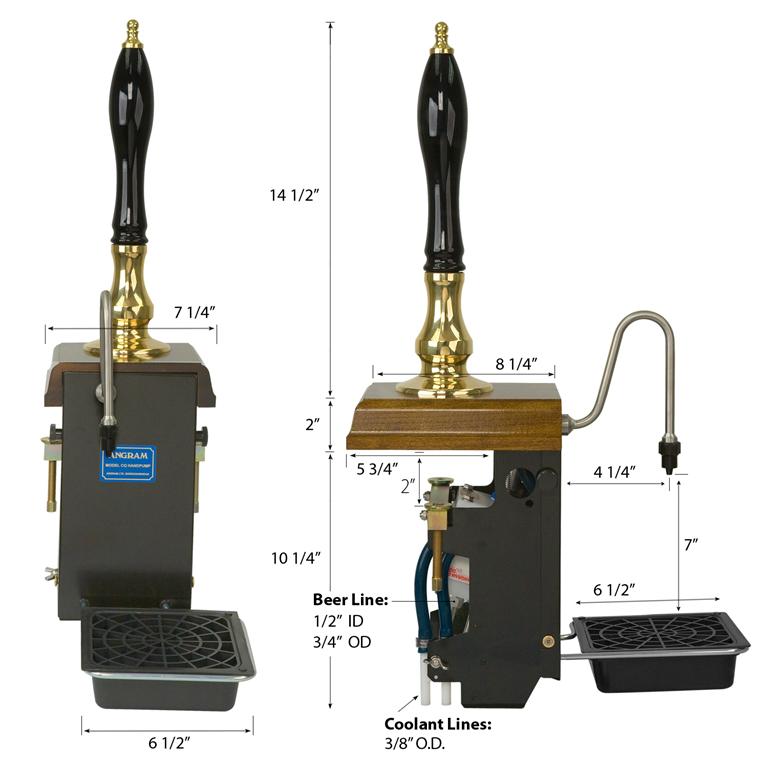 I began this conversation yesterday.

Conditioning ale in the cask (real ale), then pouring it by use of a hand pump (beer engine), are quintessentially British ways of brewing, serving and enjoying ale, with the basic idea being to take a slightly unfinished and still living product and artfully prepare it to be served at the optimal time, with a gentle carbonation produced naturally.

Little bubbles, not big ones.
Cool, not cold.
Low in alcoholic strength, not high.
Sociable, not rocket-fueled.

“Wonderful, low-octane social lubricant” is a great way of summarizing the cask-conditioned ale experience in the British Isles, and perhaps the single greatest annoyance of my career in beer has been the absence in America of traction for this tradition.

One long-term exception is Pints Pub, a brewpub in Denver, which appears to remain in existence. On the three occasions in the 1990s when I was able to attend the Great American Beer Festival, I’d find a way to make it to Pints. I’m sure there are others like it.

Now is seems British ale in general, and cask-conditioned ale in particular, might constitute a new “thing.” I can only hope.


Warming up to ales: the British beer movement brewing in America, by Rory Carroll (The Guardian)

Instead they drink ice-cold Budweiser-type lagers or potent craft brews and leave the Brits to their eccentric potions.

Now a Minnesota-born brewer with a punk vibe and passion for English ale hopes to change all that, starting with “sublime pints” in Los Angeles.

“British beers have been flying under the radar here. They’re maligned and they basically apologise for being what they are,” said Andy Black. “We’re not apologising. We’re proud of what we do and want to be in your face about it.”

Going way back in time, certain American craft breweries and some non-brewing pubs installed hand pumps, and I always found the results variable — not for lack of sincerity in the their effort, but because almost nothing about our way of organizing a brewery, setting up a pub and conceptualizing beer as a way of life actually addresses the logistical needs of cask ale culture.

It’s understandable, seeing as America hasn’t had a cask ale culture since long before the Civil War, if then.

Germans brought lager, and in the 19th-century lager behaved like an invasive species, reducing ale consumption to almost nothing, whether hand-pumped, kegged or bottled. Ale bounced back during the past three decades, although not very often in the British fashion, which is subdued and balanced, as opposed to amping up and ramping up beer styles.

As an alternative to obtain genuine cask-conditioned ale, why not import the real thing from the United Kingdom?

Primarily because cask ale’s lower gravity and meticulous process of preparation renders it relatively fragile, something we learned at the pub along the way.

By 2002 or thereabouts, the B. United beer importing firm had devised an effective way to ship cask ale from the U.K. to the states, confining most of the transport to cold weather months, doing the final conditioning in-house, and using refrigerated trucks to get the firkins to wholesalers.

The only problem with all this was the added cost, which meant you’d be selling a pint of 4% abv “ordinary” bitter for $8 or $9, somewhat defeating the purpose of a simple, sessionable ale.

Nonetheless, my friend Steve Crull constructed a gleaming wooden cabinet for use at the Public House (Rich O’s, to many), upon which was affixed a reconditioned beer engine made available to us by B. United. Just like that, we went into the business of serving cask-conditioned ale — but only occasionally.

The firkin would be delivered on Tuesday. It needed to rest undisturbed in the walk-in for a few days, and be vented 24 hours ahead of serving. I’d aim for a Friday, and we’d throw some of those reusable freezer gel ice pads on the firkin to keep it lightly chilled.

Rather than the usual mark-up on draft, I’d add a buck or two to cost, and call it good. If everything went right, the firkin would be gone by evening’s end, and to make sure, I’d drink four or five of them.

At the advent of NABC’s Bank Street Brewhouse in 2009, I was bound and determined that we’d brew our own British-style cask ales and bravely alter paradigms. We bought and installed two beer engines, and David Pierce came up with a brilliant way of rendering accurate cask ales from our distribution-oriented brewing system, but it didn’t work out in the end.

The economy of scale in the brewhouse was too large, and not intended to accommodate such a niche. Even when we managed to keep the two pumps supplied, customers tended to yawn. They didn’t know the story. Every turnover in staff also meant another lengthy explanation from scratch, which soon became tiresome for all of us.

When I left NABC in 2015, the hand pumps were uprooted to make room for an espresso machine. If there’s any one thing that broke my heart about the end of my NABC, it was this.

I wonder what happened to them?

Chicken, meet egg. For cask ale on a hand pull to work, there needs to be a consistent supply and a constant rate of depletion, but when even otherwise knowledgeable beer drinkers are unaware, and cask ale moves slowly, the break-even point where education meets demand never seemed to arrive.

In short, as I suppose Pints Pub was proving all those years ago, it’s best to have a small brewery on site, dedicated to cask ale only, and cask ale alone — and it doesn’t hurt to have a huge collection of Scotch whisky as backup.

As noted yesterday, Pints & Union will not be pouring “real ale” from cask-conditioned firkins by means of beer engines. However, if a sustainable and cost-effective way to perform this function emerges, I’ll grab it ASAP. Of course, we might hoist 5-gallon “pins” on occasion and pour them picnic-cooler-style from the bar top. It’s all about availability … and quality.

I’ll let you know more when there’s more to know.