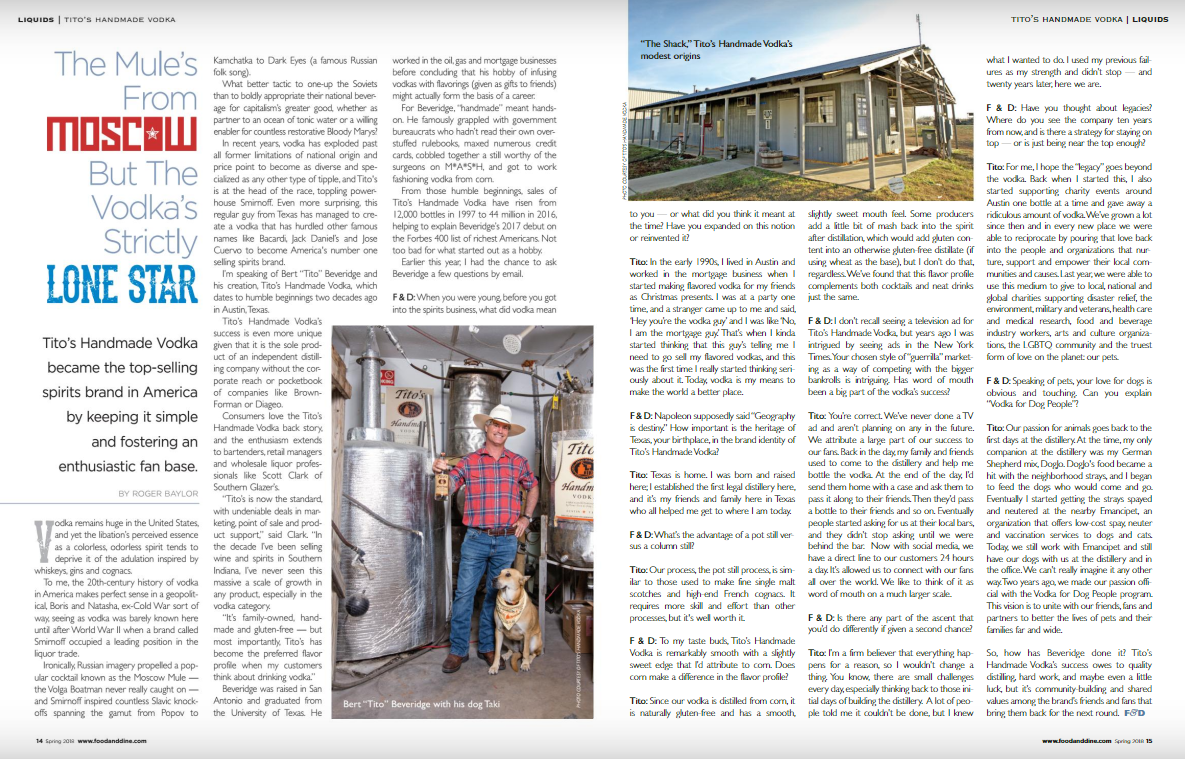 When the current issue of Food & Dining Magazine comes out, it is my habit to glance back at the previous quarterly edition and reprise my contributions.

In this instance, it’s Spring 2018 (Vol. 59; Feb-Mar-Apr), and my profile of the Chef Space kitchen incubator, and interview with Bert “Tito” Beveridge.

First up, the vodka maker. The Chef Space profile will appear in a separate post.

THE MULE’S FROM MOSCOW, BUT THE VODKA’S STRICTLY LONE STAR.

Tito’s Handmade Vodka became the top-selling spirits brand in America by keeping it simple and fostering an enthusiastic fan base.

Vodka remains huge in the United States, and yet the libation’s perceived essence as a colorless, odorless spirit tends to deprive it of the adulation inspired by whiskeys, gins and cognacs.

To me, the 20th-century history of vodka in America makes perfect sense in a geopolitical, Boris and Natasha, ex-Cold War sort of way, seeing as vodka was barely known here until after World War II, when a brand called Smirnoff occupied a leading position in the liquor trade.

What better tactic to one-up the Soviets than boldly appropriate their national beverage for capitalism’s greater good, whether as partner to an ocean of tonic water or a willing enabler for countless restorative Bloody Marys?

In recent years vodka has exploded past all former limitations of national origin and price point to become as diverse and specialized as any other type of tipple, but aside from waffle-flavored vodkas distilled according to ancient Druid techniques, exactly how did a regular guy from Texas create a craft vodka that recently toppled the perennial powerhouse Smirnoff as America’s number one spirits brand, hurdling other famous names like Bacardi, Jack Daniels and Jose Cuervo, and in the process completely reordering the American vodka hierarchy?

I’m speaking of Bert “Tito” Beveridge and his creation, Tito’s Handmade Vodka, which dates to humble beginnings two decades ago in Austin, Texas.

Tito’s Handmade Vodka’s success is even more unique given that it is the sole product of an independent distilling company, without the corporate reach or pocketbook of companies like Brown-Forman or Diageo.

Consumers love the Tito’s Handmade Vodka back story, and the enthusiasm extends to bartenders, retail managers and wholesale liquor professionals like Scott Clark of Southern Glazer’s.

“Tito’s is now the standard, with undeniable deals in marketing, point of sale and product support,” said Clark. “In the decade I’ve been selling wine and spirits in Southern Indiana, I’ve never seen this massive a scale of growth in any product, especially in the vodka category.

“It’s family-owned, handmade and gluten-free – but most importantly, Tito’s has become the preferred flavor profile when my customers think about drinking vodka.”

Beveridge was raised in San Antonio and graduated from the University of Texas. He worked in the oil, gas and mortgage businesses before concluding that his hobby of infusing vodkas with flavorings (given as gifts to friends) might actually form the basis of a career.

For Beveridge, “handmade” meant hands-on. He famously grappled with government bureaucrats who hadn’t read their own overstuffed rulebooks, maxed numerous credit cards, cobbled together a still worthy of the surgeons on M*A*S*H, and got to work fashioning vodka from corn.

Earlier this year, I had the chance to ask Beveridge a few questions by e-mail.

F & D: When you were young, before you got into the spirits business, what did vodka mean to you – or what did you think it meant at the time? Have you expanded on this notion, or reinvented it?

Tito: In the early 1990s, I lived in Austin and worked in the mortgage business when I started making flavored vodka for my friends as Christmas presents. I was at a party one time and a stranger came up to me and said, ‘Hey you’re the vodka guy’ and I was like ‘No, I am the mortgage guy.’ That’s when I kinda started thinking that this guy’s telling me I need to go sell my flavored vodkas, and this was the first time I really started thinking seriously about it. Today vodka is my means to make the world a better place.

F & D: Napoleon supposedly said “Geography is destiny.” How important is the heritage of Texas, your birthplace, in the brand identity of Tito’s Handmade Vodka?

Tito: Texas is home. I was born and raised here, I established the first legal distillery here and it’s my friends and family here in Texas who all helped me get to where I am today.

F & D: What’s the advantage of a pot still versus a column still?

Tito: Our process, the pot still process, is similar to those used to make fine single malt scotches and high-end French cognacs. It requires more skill and effort than other processes, but it’s well worth it.

F & D: To my taste buds Tito’s Handmade Vodka is remarkably smooth with a slightly sweet edge that I’d attribute to corn. Does corn make a difference in the flavor profile?

Tito: Since our vodka is distilled from corn, it is naturally gluten free and has a smooth, slightly sweet mouth feel. Some producers add a little bit of mash back into the spirit after distillation, which would add gluten content into an otherwise gluten-free distillate (if using wheat as the base), but I don’t do that, regardless. We’ve found that this flavor profile complements both cocktails and neat drinks just the same.

F & D: I don’t recall seeing a television ad for Tito’s Handmade Vodka, but years ago I was intrigued by seeing ads in the New York Times. Your chosen style of “guerrilla” marketing as a way of competing with the bigger bankrolls is intriguing. Has word of mouth been a big part of the vodka’s success?

Tito: You’re correct. We’ve never done a TV ad and aren’t planning on any in the future. We attribute a large part of our success to our fans. Back in the day, my family and friends used to come to the distillery and help me bottle the vodka. At the end of the day I’d send them home with a case and ask them to pass it along to their friends. Then they’d pass a bottle to their friends and so on. Eventually people started asking for us at their local bars and they didn’t stop asking until we were behind the bar. Now with social media, we have a direct line to our customers 24 hours a day. It’s allowed us to connect with our fans all over the world. We like to think of it as word of mouth on a much larger scale.

F & D: Is there any part of the ascent that you’d do differently if given a second chance?

Tito: I’m a firm believer that everything happens for a reason, so I wouldn’t change a thing. You know, there are small challenges every day, especially thinking back to those initial days of building the distillery. A lot of people told me it couldn’t be done, but I knew what I wanted to do. I used my previous failures as my strength and didn’t stop, and twenty years later, here we are.

F & D: Have you thought about legacies? Where do you see the company ten years from now, and is there a strategy for staying on top — or is just being near the top enough?

Tito: For me, I hope the “legacy” goes beyond the vodka. Back when I started this, I also started supporting charity events around Austin one bottle at a time, and gave away a ridiculous amount of vodka. We’ve grown a lot since then and in every new place we were able to reciprocate by pouring that love back into the people and organizations that nurture, support and empower their local communities and causes. Last year we were able to use this medium to give to local, national and global charities supporting disaster relief, the environment, military and veterans, health care and medical research, food and beverage industry workers, arts and culture organizations, the LGBTQ community and the truest form of love on the planet: our pets.

F & D: Speaking of pets, your love for dogs is obvious and touching. Can you explain “Vodka for Dog People”?

Tito: Our passion for animals goes back to the first days at the distillery. At the time, my only companion at the distillery was my German Shepherd mix, DogJo. DogJo’s food became a hit with the neighborhood strays, and I began to feed the dogs who would come and go. Eventually I started getting the strays spayed and neutered at the nearby Emancipet, an organization that offers low-cost spay, neuter and vaccination services to dogs and cats. Today, we still work with Emancipet and still have our dogs with us at the distillery and in the office. We can’t really imagine it any other way. Two years ago, we made our passion official with the Vodka for Dog People program. This vision is to unite with our friends, fans and partners to better the lives of pets and their families far and wide.

So, how has Beveridge done it?

Tito’s Handmade Vodka’s success owes to quality distilling, hard work, and maybe even a little luck, but it’s community-building and shared values among the brand’s friends and fans that bring them back for the next round.