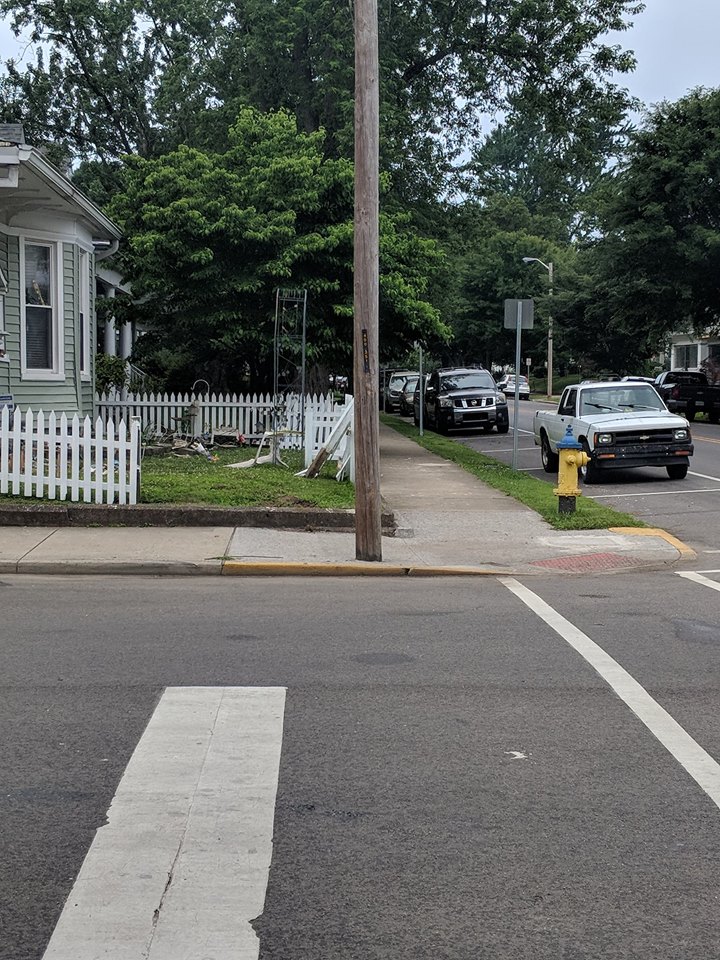 Insightful observer AGB photographed the scene on Sunday afternoon after a driver deposited his car in the yard of the home on the southwest corner of Elm and 13th.

Yet another wreck at Elm and 13th. This time the cars hit and one went into the yard and hit the house. But those flashing pedestrian walkway lights that nobody pays attention to were a much better choice than 4 way stops … there is only a 2-way stop here and you can’t see around the cars parked. So there’s often wrecks/near wrecks at this intersection.

Ironically, it was precisely this intersection that I mentioned last week to Jim Rice of HWC Engineering, the mayor’s preferred contractor for street design, as worthy of added study owing to sight lines and the completely ineffective solar-powered “high visibility” pedestrian crossings.

Rice quickly brushed me off, asking how I knew for a fact these crosswalks don’t work. I replied that as a frequent walker, a couple hundred hours of direct experience is something not to be ignored; he answered by denigrating real-life observation as opposed to the sheer brilliance of that segment of the populace which has chosen to become engineers.

Sorry, Jim. If the choice is believing you or my own two eyes, you can hurriedly beat a retreat back to suburban Indianapolis (by car, of course) while as a walker, I’ll continue crossing in the middle of the block — because this is safer than the prevailing reality following your de-Specked abortion of a two-way street grid plan, which your presumably flawless firm of flunkies conjured between amassing campaign donations to a failed mayor who ordered the car-centric butchery in the first place.

As an aside, the idiocy of these “high irrelevancy” pedestrian crossing lights is so blatantly obvious that even 3rd district councilman Greg Phipps noticed it, and made at least one appeal to the somnolent Bored of Works, maybe two.

To no one’s surprise, BOW has been completely unresponsive — and as fatigued city engineer Larry Summers informed council just a few weeks ago, he’s so busy coordinating campaign donations from paving companies that there’s no time for the consideration of other matters.

Unfortunately, Phipps has a history of stopping short of useful action that might offend Dear Leader, so here we are. Perhaps it’s time for residents of the 3rd district to learn from the instructive experience of Vulcan, West Virginia in the late 1980s. There’s a crucial and delightful twist, seeing as the USSR and the GDR no longer exist.

Let’s ask the Floyd County commissioners for help with this intersection, seeing as we’re getting none from the Anchor Regime.

Feeling forsaken by their own government, after repeated pleas to have a new bridge constructed, the people of this West Virginia community made an unprecedented move which soon garnered international headlines. At the height of the Cold War, residents of Vulcan wrote to the Soviet Embassy in Washington, as well as to communist officials in East Germany, detailing their plight and requesting foreign aid from the nations.

Sensing an opportunity to shame the American government, the Kremlin immediately dispatched journalists to the United States.

The Spokane Daily Chronicle wrote, “Soviet officials were amused today by reports that the small town of Vulcan, W.Va. has appealed to the Kremlin for foreign aid… The town, with a population of 200, asked the Soviet government for financial help to build a bridge after the town was turned down by the U.S. and West Virginia governments.”

Embarrassed by the attention their lack of assistance was receiving, state officials wasted no time in committing $1.3 million and built a bridge for the tiny community.