The reason why I don’t write fiction is that real life is endlessly bizarre, so let’s take a look at the next purloined event from the foot-shot specialists. It’s called 1 Night Stand, and if this term sounds weirdly familiar to you, keep reading.

The 1 Night Stand originated in 2009 as an idea minted by Jala Miller, a civic-minded private citizen. She proceeded to organize a sequel, or maybe two, before the notion ran its course.

Now DNA is bringing back an event that wasn’t ever their intellectual property to begin with, though as we’ve seen so depressingly with the Taco Walk (are various walks and crawls the only thing these people can think to do?), no one at DNA seems bothered much by the blatant pilferage, and elected officials merely shrug.

Details
We’re excited to be bringing back the 1 Night Stand! This is an event that was held in Downtown years ago and we’re looking forward to reviving it. This will be a Downtown New Albany Pub Crawl. Participants will pre-purchase a wristband with drink tickets along with a t-shirt and on the day of the event, will choose where to spend their drink tickets at participating locations. We anticipate this being a big draw to Downtown during the summer and a fun event showcasing our local bar/restaurants. Any questions please email developnainfo@gmail.com or message us on Facebook. Any derogatory comments will be deleted.

Boy oh boy, those last lines: “Any questions please email developnainfo@gmail.com or message us on Facebook. Any derogatory comments will be deleted.”

Our vanguard of Gahanesque party planning expertise is getting a bit touchy, don’t you think? And yet, I persist, safe in the knowledge that my question wasn’t derogatory, and if I asked it via e-mail, it would be ignored like all the previous ones have been. 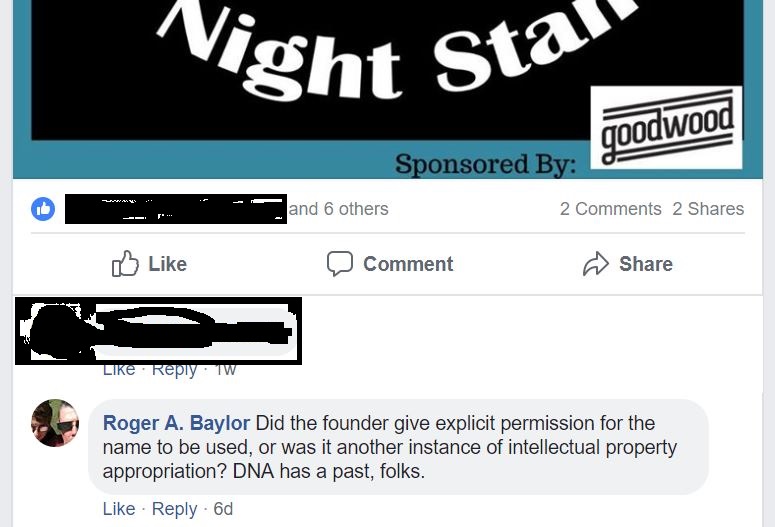 Did the founder give explicit permission for the name to be used, or was it another instance of intellectual property appropriation? DNA has a past, folks.

A week has passed, and guess what?

The Green Mouse tells me another local event organizer was planning on staging precisely such a pub crawl reprise later this summer, and actually asked and received permission from Jala, the founder, only to be usurped by the mayor’s preferred monopolists.

My advice to all and sundry: if you have a great idea for a community event, keep it a secret. The very walls have ears — and grubby, grasping fingers.

Here’s the story of the original 1 Night Stand from NA Confidential on August 5, 2009.

When first we heard from Jala Miller, she was moving into her new apartment in the building that houses Studio’s Grille & Pub in downtown New Albany. Shortly thereafter, we were introduced, and I heard her idea for a downtown pub crawl, something that would being attention to the many new establishments coming to downtown New Albany.

Most important to me is her view of the demographics involved (her words):

To make this event a success – it is important that everyone “looks at the big picture”. The goal of this beer walk is to get the younger generation to want to visit New Albany “as a whole” – to make it a destination similar to that of Bardstown Road. In order for this to happen, the bars participating will need to be excited about it!

Jala has the plan together, and here are preliminary details. I concede that the date coinciding with Brew at the (Louisville) Zoo is inconvenient, but to be truthful, summer weekends tend to be booked from May through October in recent years. NABC will be participating in “NA 1 Night Stand” in a yet-to-be-determined fashion, hopefully with an outdoor party to serve as the trial run for similar events coming in September and October.

“The ‘NA 1 Night Stand’ is a one day welcome or reintroduction to downtown NA and all of the redevelopment that has been taking place. Join us on August 29th for a ‘Beer Walk’ different than anything NA has ever seen. Beer Olympics sign in begins at 3:00pm at Steinert’s.

“Participating establishments will be featuring drink specials, food specials, and other attractions such as live music throughout the entire event day. Raffle prizes will be awarded throughout the day thanks to many local sponsors!”